Airport Road Travelogue
Part VII: To the End of Airport Road... And Beyond! 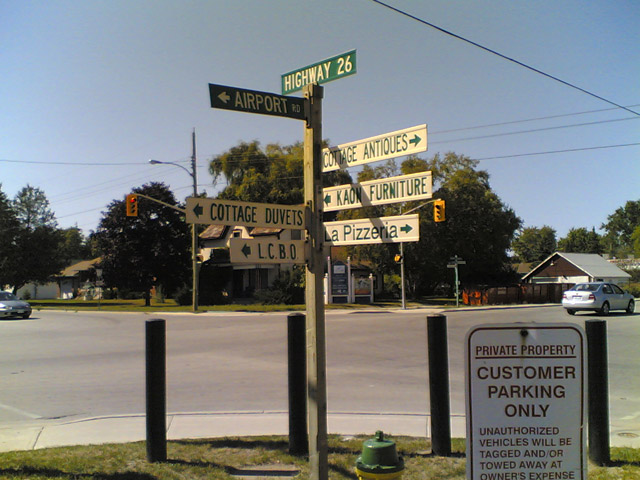 In my opinion, a perfect road is a street or a country highway that bears the same name through its entire length, with few breaks or jogs. Roads which change their name enroute would fall into a different category; unbroken roads, but still interesting drives.

Airport Road loses its name as it enters Simcoe County, becoming County Road 42 until it enters the community of Stayner a few kilometres north. There, a sign near the centre of town points down the road I’ve driven in on, suggesting either that I’m on Airport Road, or that I’ve come from the direction of Airport Road.

“Airport Road is not an officially recognized address for County Road 42 in Simcoe County,” says Shawn Davidson of the Stayner Chamber of Commerce. “The 911 system, implemented in the mid 90s, designated another road that travels past the Collingwood Regional Airport. That being said, it’s still widely referred to as Airport Road by the citizens of Stayner.”

Stayner pops out of nowhere among the rolling farms of Clearview Township. With a population of over 3,000, it is the largest community I’ve encountered so far north of Brampton. It was officially founded in 1874, changing its name from Dingwall when a local land baron and philanthropist suggested the name in honour of his father, Thomas Stayner, who had previously served as postmaster.

Stayner was bolstered by a railway that ran through the town on its way to Collingwood. Dairy farming was a major industry as were orchards. Reinhard Vinegars is still a major employer in town, established early in the 20th century because of its proximity to the orchards. Today, Stayner is a bedroom community, explains Davidson. “Many of our citizens are employed in the larger centres near us; these include Barrie, Alliston, Collingwood, and even the GTA.”

Almost immediately, I’m near the centre of town, a Tim Horton’s at my right. I come to an intersection with traffic lights, and traffic that is turning from the street on my right, onto my road ahead. This is Highway 26. After the lonely drive on Airport Road, the heavy traffic is a shock, and obviously Stayner’s bread and butter.

Highway 26 connects Highway 400 near Barrie to the western half of Wasaga Beach and the town of Collingwood as well as other communities along the Georgian Bay shore. Torontonians eager to get to their cottages ignore Airport Road and take the divided highway, but it only goes so far. Eventually, they have to get off, and Stayner is a convenient rest-stop along the way.

It’s not the watery playground of Wasaga Beach, nor the rugged shores of Collingwood, but that’s to Stayner’s benefit. Stayner caters to the beach commuters passing through, but the majority of its housing is reserved for full-time residents.

“We have a strong sense of community,” says Davidson. “There has been a great deal of growth for many years, but there are a lot of long-time citizens. This is a place where you know your neighbours. Our largest industry is agriculture - beef, dairy, pork, vegetable, cash crop - and the spin-offs from the farms helps our commercial sector.”

I’ve been to communities whose sole industry is tourism. I’ve seen the tourist downtown of Niagara Falls, and the theme-park-like main street of Grand Bend, and while I’ve enjoyed myself in these places, a part of me has always wondered how desolate these places would look in the off season. Stayner doesn’t have an off-season. Sitting in the Tim Horton’s at the point some say Airport Road ends, I sit among locals, resting and chatting at the end of the day, talking about the news of their community, while the world passes them on the street outside.

That said, the town is happy to cater to the tourists. Extra signs on the street posts point me to various antique shops. The commercial core, along Highway 26, offers a variety of interesting stores in turn-of-the-century brick buildings. Shawn Davidson also alerts me to a number of events:

“The Chamber of Commerce runs Music in the Park for 10 weeks throughout the summer,” says Davidson. “The Lions Club holds an annual Summer Dance where they raffle a vintage pick up truck - the 37th year this past summer - and the Kinsmen hold an annual comedy night. The Heritage Society holds an annual heritage day each July, and then there are sidewalk sales, Christmas Light Up Night, all the usual small town events that help to build the sense of community we enjoy.”

“As many as 15,000 vehicles drive through our downtown each day during the ski season and the peak summer months,” he adds. “Getting them to stop could be the key to our commercial success. I believe we need to provide an attractiveness that will draw them back for a visit after they have reached their destination, got unpacked, settled in, et cetera. It will always be difficult to compete with Collingwood on that front, but Wasaga is a summer destination with a growing full time population that shops extensively outside of Wasaga, so we are capitalizing on that.”

Next: Highway 26 and Hume Street, to the End of the Road