The Chronicles of Crestomanci Series Reviewed 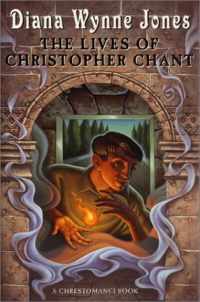 If I may be permitted to gush, the best book series that I've read in the past two years has to be Diane Wynne Jones' Chronicles of Crestomanci. This young-at-heart fantasy combines the classic elements of a magical universe, parallel worlds, magicians, sorcerers, enchanters, and young heroes to catch our hearts. Everything that you read in this book series has been done before, but never has it been done in this combination. Combine this with Ms. Jones' exuberant and artful writing, and you have a set of books that enchant.

The premise of this book is that there is a multi-verse of worlds related to each other. Closely related worlds belong within a series (worlds A, B, C of series 12, for instance), whereas distantly related worlds are part of a different series altogether (Series 1 through 12, where even the positions of the continents are different). The magicians of World A of Series 12 have chronicled the different worlds, and there is a sense that this world (one step away from our Earth, where society is a few decades behind us, but where magic plays a significant part) is the 'original' (shades of Amber). A person who lives in one world only (where his counterparts in the eight other related worlds within a series died early in life or were never born) inherits the attributes of his eight other doubles, becoming a powerful enchanter with nine lives. Nine-lived enchanters are rare and sought after to fill the role of Chrestomanci - a powerful figure in World A/Series 12 who keeps the peace in his world and in all the rest.

There are four books in this series so far. In all, Chrestomanci plays a secondary role, while different youthful protagonists come to the fore, usually learning about their special abilities, and being forced to choose whether to use their powers for good or evil. Of course, good always wins (it may not be realistic, but it's immensely satisfying). Christopher Chant, who is Chrestomanci in three of the books, even plays the role of youthful hero in The Lives of Christopher Chant, which acts as a prequel to the series, showing his coming of age.

The stories are delightful and funny. Ms. Jones gets you into the head of the protagonists and you feel for their innocence as they are overwhelmed by the magical world they are thrust into before coming to terms with their inner strengths. A Charmed Life starts the series, and is carried by the battle of wills between Chrestomanci, and the headstrong Gwendolen Chant as she seeks to prove that she's a powerful witch that should be noticed (point-of-view character Eric Chant, her brother, is the true enchanter, though he doesn't know it. Gwendolen has been getting her powers from him). The Lives of Christopher Chant is even better, as Ms. Jones settles down to exploring some of the related worlds and the place between.

All in all, I recommend these books very highly. Fans of Harry Potter will enjoy the sense of youthful magic and mystery. The Chrestomanci series is more light-hearted, with no Voldemort waiting in the wings, but the writing is stronger, and Christopher Chant makes an excellent young Dumbledore.