The Canadian Senate I - The Sleeping Giant 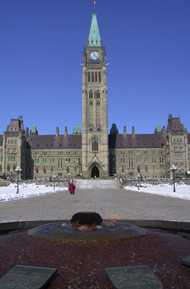 In an earlier post, I talked about Canada's connection with the British monarchy through the largely ceremonial position of the Governor General (our official head of state). I said that, desirable though it might be to sever this connection and declare Canada a republic, the change might not be worth the constitutional pains that would result. If we're going to put ourselves through our national headache again, better to do that with an institution with real power: the Canadian Senate.

Canada's Senate traditionally exists as a "chamber of sober second thought". It was put there deliberately to slow down the passage of laws introduced by the House, so that every law could get its proper debate. The Senate seats do not correspond to small geographical districts, but by province, providing another way to look at legislation -- similar to the House/Senate arrangement in the United States. Both the Senate and the House have the ability to hold public hearings on any piece of legislation. They have no right to cancel the other's public hearings; thus, with two houses, the opportunity for public debate on all legislation is (theoretically) increased.

This does not make Canada's Senate undemocratic, as suggested in the infamous anti-Canadian episode of CNN's Crossfire. Senators do owe their seats to an elected (albeit indirectly) figure: the Prime Minister. We do not have 105 tyrants sitting in a secretive chamber thwarting Canadian democracy. Since we elect the members of the House, in an election that's as free and fair as any the United States has to offer, the Senate is a democratic institution. It's just operating at a fraction of its potential.

Because the Prime Minister appoints senators, and because senators have real power, he of course selects senators that follow his party line. After a few years of a certain party holding power in the House, you can be pretty sure that the majority of Senators will also be members of the governing party. Senators hold their seats until they are 75 however (they used to be appointed for life), and so when governments change, a defeated party can hold a majority of Senate seats for years after a new party takes office. This has only resulted in showdowns between the Senate and the House thrice (as far as I know). Once, in 1988, the Liberal opposition used its Senate majority to force the governing Conservatives to call an election over the Free Trade Agreement. The Conservatives won, and Free Trade passed the Senate. Then, in the late 1990s, Conservative prime minister Brian Mulroney used an obscure constitutional measure to temporarily expand the senate from 104 seats to 112, filling the eight new seats with Conservatives to pass his controversial GST legislation. Finally, in 1993, the defeated Conservatives used their Senate majority to limit the incoming Liberals' actions nullifying a deal over Pearson Airport. In general, defeated governments don't use the power of their Senate majorities because they don't want to appear as undemocratically clinging to power.

The Senate has done a number of good things over the past twenty years. It forced an election over Free Trade. It forced discussion over the GST bill. It defeated a flawed and controversial Abortion bill, and it limited the government's ability to limit itself from the liability of the courts. It recently sponsored an independent commission examining the decriminalizing of marijuana. For all the discussion about how the House is a flawed democratic institution (more on this later), the Senate provides the opportunity of redressing the House's flaws, just by acting as it has been intended to do. For the most part, however, it remains definitely under the thumb of the House -- or, rather, the Prime Minister's Office.

Why don't we change this? Well, the eighties and the nineties showed Canadians the pain that can arise from changing one's constitution, and we have spent the last nine years with our eyes squeezed shut and our hands over our ears trying desperately to find some peace and quiet. But now we may be ready for change -- especially if we don't try to fix everything at once and take things one step at a time.

Many agree that the Senate needs reform. Now may be the right time to reopen the constitution to fix what is the single biggest flaw in our democratic system. In the coming days, I'll discuss what could be fixed, and how it might be done.