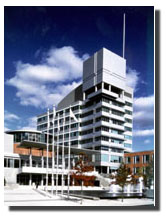 The Regional Municipality of Waterloo is the largest urban area immediately outside the Greater Toronto Area, housing almost a half million people, two universities and one major community college. It is divided up into three cities (Cambridge, Kitchener and Waterloo) and four townships (Woolwich, Wellesley, Wilmot and North Dumfries, surrounding the three cities); an arrangement made in 1974 when the provincial government reorganized Waterloo County, pulling the cities and the townships together, and even creating Cambridge out of thin air, combining the three separate towns of Galt, Preston and Hesplar into a single unit.

And, I realize that I've described my current home town in entirely political terms; phrases that are boring, and probably meaningless to most of my readers.

Waterloo Region has been my home since my parents and I moved from Toronto in 1991. My parents' house, my first apartment, and my first home have all been in Kitchener, while my schooling took place at the University of Waterloo in (surprise!) Waterloo. All my jobs have been in this region, except for one six month stint that had me commuting into Toronto. I am a Torontonian, born and bread, but I suspect I am as much a citizen of Waterloo Region in general, and Kitchener in particular as I am a Torontonian.

Waterloo Region has always had a low-level struggle with its identity. Consider how many nicknames this area has: Kitchener-Waterloo, the TriCity Area, the Golden Triangle, and even just Waterloo. Kitchener is the heart of this area, the largest city of the three, centrally located and housing a fair chunk of the region's industry. It is so closely linked to the City of Waterloo they share a main street. Sidestreets cross the boundary between the two cities with little indication of where one ends and another begins. Many outsiders think that Kitchener and Waterloo are one city -- a fact that Waterloo inadvertantly fosters by naming its core area "Uptown" as opposed to "Downtown Waterloo" -- but Waterloo residents would sharply correct anybody who made that mistake. Waterloo is different from Kitchener; it houses two universities, it's neighbourhoods are richer, less working class. And they pay less taxes (or, they used to) than those poor sods in lower-class, overserviced Kitchener.

Then there is Cambridge, which still hasn't forgiven the province for forcing its three parts together, and shoving the whole bundle into Waterloo Region. It's definitely separate from Kitchener (thanks especially to Highway 401 acting as a very effective boundary), so much so that even people within Waterloo Region forgets that it exists. Until recently, Waterloo Region's transit service was split between Kitchener Transit (also serving Waterloo and again fostering the suggestion that Kitchener and Waterloo were two parts of the same city) and Cambridge Transit. The two agencies didn't connect across the 401 divide until Waterloo Region finally took over both public transit agencies and set about improving service.

Despite this, Waterloo Region functions very well. Unlike the City of Toronto, the urban area of Waterloo is entirely enclosed by the regional boundary. Vast tracts of countryside, presided over by the surrounding townships, make doubly sure that the regional government truly covers the region. The councils are small, compared to Toronto, and the members seem less interested in playing political games. Things are actually getting done, from the improvement of public transportation, to the revitalization of Kitchener's downtown core, to the adoption of a coherent official plan.

And again my talk returns to political structures. I just can't shake that part of my mindset, I suppose. Given the struggles faced by Toronto's council, this is one of the first differences that come to mind when comparing my two homes. But politics isn't the only thing that makes my city my home. Let me revisit this issue, and tell you what is special about my home...