All of Us Were Scared... 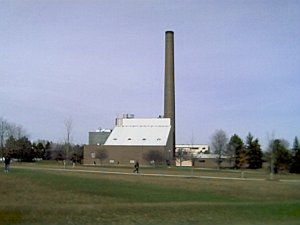 I’m carrying my JamCam with me, snapping pictures that catch my fancy. Not many do, apparently, though I’ll be sure to take my camera along for my Chicago trip (more on that later). This is the scene I see as I walk north from my work. Hard to believe that one week before, this was an expanse of white…

Kathy Stinson started her spring writing course this past Tuesday. The class has eight people, seven of which were from Kathy’s fall class. The smaller class should mean a closer group and more opportunities to workshop our work. It would be better if I had something to workshop. The Young City is not ready, and Fathom Five has been done before. Perhaps I should give Rosemary and Time another test? Alternately, Kathy’s writing assignment may have given me an idea for a short story… we’ll see.

Anyway, these classes mean that I’m back to freewriting. This was my response to the posted sentence, All of us were scared:

All of us were scared of what would pop out of the box. Would it be a vegetable, like zuchinni, that would clobber us and go for our throats? Or possibly uranium, which zaps you with its X-Ray eyes?

John had brought the box, you see, and said that his brother, Schrodinger, had killed a cat in it. He’d then set the box on the table and left the room, leaving us to stare at it.

Vegetables are dangerous creatures. They watch (potatoes have eyes), listen (corn has ears) and learn (lettuce has a good head for it). What they learn, they relay to their leader, Mr. Pumpkinhead, who will organize the revolution, choke us in our sleep with eggplants, tear down our cities with ivy, creep across our roads, lower our bridges, and make the planet Earth green again.

Those of us that survive will be mounted on poles to scare the crows away.

All of us were scared of Friday. When the week ends, what comes up to replace it? Will we run out of time? Fall off the calendar? Topple off the top of the clock at midnight (12:30 in Newfoundland)?

Who sets the clocks? Why must we spring forward but then fall back? Why can’t we just keep going? Who tells the time better than the sun? What other clock do we need but the Earth rolling beneath us, taking us further, at its own loping speed.

I backed off of my previous all-DIV design for this website, and am now using a table to make sure all of the elements show up properly on all browers. At least… I think that’s what I’ve done. So, all of you who are browsing this website, tell me, how does it look now?

Erin and I will be heading into Chicago this weekend to meet up with my sister-in-law, my mother-in-law and their respective husbands. We’ll leave immediately after work, and should be in Ann Arbor that evening where we’ll hook up with Wendy and Lars. We’ll leave for Chicago at noon and should be in the Windy City Friday evening. We return home on Sunday.

I’ll try to post from Ann Arbor, but I won’t have net access in Chicago. So, don’t expect to hear from me until Sunday night.