Chicago, Without the Pictures 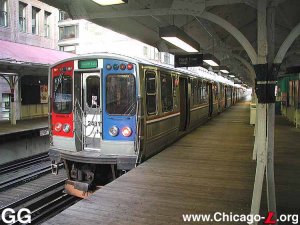 The picture on the left was taken by Graham Garfield for Chicago L .Org, the best resource I've seen for Chicago "L" information. Have a look at this website for excellent photo and historical archives. If you are at all a railfan, you'll find this site a hard one to leave.

So, when Lars and Wendy got home around noon on Friday, we packed up and left Ann Arbor, heading west along I-94. If traffic is good, you can get to Chicago in about four-to-five hours. Traffic is good 90% of the time. Of course, that last 10% is in Chicago. We arrived Friday night, at the end of rush hour. Ack!

Actually, we've seen worse. People may have stayed home because it was Good Friday. We made it into downtown in one piece, and found a place to park behind the Chicago Hilton hotel on Michigan Avenue and met Michael and Rosemarie in the lobby. We retired to our rooms to flop, and look over our Easter baskets. The Easter Bunny was kind enough to give us a DVD copy of Harry Potter and the Chamber of Secrets, so I can knock that off my wishlist...

Anyway, while in Chicago, we got ourselves our own personal chauffeur. As we headed out to dinner in Greektown, the valet asked if we wanted a cab, and called up this mini-van -- perfect for a party of six. Michael got on well with the driver (John, who immigrated first to South Africa in 1965, and then left South Africa for America two years later in order to leave his aunt behind, but I'm getting ahead of myself), and as we arrived at the restaurant in Greektown, Michael got John's cellphone number for the drive home. So, after a night of Gyro meat and flaming cheese (our unofficial title for Saganaki), Michael called up John and got a ride home. This pattern was repeated the next day.

John is one of those characters that make cities great. He was friendly, bigger than life, not afraid to talk to us and voice his opinion. Bush? He likes him (remember, he's driving a car full of liberal Democrats). But he's thick like brick. Then he pulled out a book of Bushisms and told Lars to read some -- doesn't that make you weep? And if the bordering countries, Canada and Mexico, have economies that improve while America tanks (as it has been since the "fiasco" in Florida)? Sorry, but you're outta there!

But his view on the war on Iraq? Well, look, here's Saddam, a hill bandit smelling like mountain goat, only takes bath once every three months before Bush's daddy set him up in power, and what does he do? He turns his back on him! Bites the hand that feeds him! Even if he were my brother, I'd kill him execution style!

John came to America in a roundabout route from Greece. It was appropriate that we took his cab to Greektown. Michael called him again the next day when I expressed a preference for Chicago deep dish pizza. He took us to a place in Greektown. Knew a perfect spot. The pizza was good, but I can't remember the restaurant's name (other than the fact that it's just north of UIC Halstead station on the Blue Line, or was it Clinton? Just where the Blue Line emerges from underground...), and it's not important. John made the trip really memorable.

On Saturday afternoon, the group split up, with Lars and Michael checking out a White Sox game, and Wendy, Erin and Rosemarie heading to the Chicago Art Institute, and me heading up to Oak Park to check out the Frank Lloyd Wright Home and Studio.

Oak Park is a well-to-do town at the western edge of Chicago proper. You can get there by taking the green line of the "L", which I did, but not before passing through some rather desolate areas of the city. The difference between Lake Street in Oak Park and just a few minutes east on the subway was night and day. Among the well-developed trees and the clean streets, Oak Park also boasts dozens of Frank Lloyd Wright homes. It's a national treasure, and Oak Park knows it. I took a lot of pictures here.

After doing a small walking tour, I paid a visit to Oak Park's shopping "Avenue" and stopped into the Magic Tree bookstore, an independent children's bookstore, and picked up a book of Shel Silversteen poems. It would be an early birthday present for Erin. I then walked south and got back on the "L" at Oak Park station on the blue line. I wanted to travel this institution, and I did. I took the blue line to Clark station, transferred to the brown line and road the elevated section to Belmont, transferring to the red line and riding it out to Howard.

I travelled through a wide variety of neighbourhoods. Chicago has an ecclectic mix of gentrification, wealth and poverty, and you can see it all on the "L". I can say, though, that I never felt unsafe. The trains were always full of a good number of people, and the stations were well patrolled with helpful transit officials. There are parts of the "L" I wouldn't ride at night, however.

I returned to the hotel at 5, and rested until it was time for dinner. Deep dish pizza in Greektown, but I already told you that. And I already told you that we gathered our things and bid goodbye the next day around noon. It was a long trip back home, but a worthy weekend. Chicago is a great city (not without its troubles, but what city doesn't have those?), and it's a privilege to visit.

My only disappointment this trip is that I didn't get to visit the Illinois Railway Museum. This museum is one I've been wanting to visit for a long time, but I don't think the fates want me to see it just yet. It's always not operating on a Saturday when I'm in Chicago only on a Saturday. It's always just a little bit after their peak season. Oh, well.

On the web, at least, I can count on the Chicago L .Org, which does for Chicago what my Transit Toronto website does for the TTC. It's an excellent read, and the Circle Line plan looks like a winner...