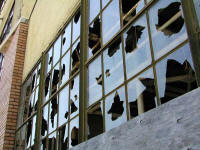 I got this article from Todd Turnbull at the Waterloo Wide Web (my papa blog!). There is sense in what this article is saying. The author doesn't name it, but what he describes has a name -- Broken Windows. The theory goes: if you as a community don't show that you care about your community in small ways -- cleaning up litter quickly, removing graffiti quickly, and fixing broken windows quickly -- you give the impression that the community doesn't care in larger ways. Larger abuses get tolerated.

Rudolph Guiliani, former mayor of New York, is the most famous proponent of this urban philosophy, and there is evidence that his crackdown worked. Not only are New York's streets cleaner, but the city's murder rate has dropped to something comparable to Boise, Idaho. And, truth is, if you keep your city in a good state of repair, things work better, and more people use it, and it comes alive. The TTC knew this from the time David Gunn became General Manager.

There is no doubt that Toronto's ill times have been reflected in the growing mounds of trash that have appeared on city highways, and the graffiti on city underpasses and bridges. Attention to this, assuming that it comes in the form of new money, will help matters, and may even make the job of dealing with its other problems easier.

Then, there is the small fact that Toronto had clean streets, and a smaller homeless problem, and nicer parks, before the Conservative government cut funding to municipalities, forcing cuts in turn to "non-essential" programs such as keeping the grass trimmed, the garbage picked up and the community centres and schools functioning. So, it's a little hypocritical for a government to think that a throne speech promise to get things cleared up gets them off the hook.

So, on my way back from lunch, I pass by my local Harvey's, and I see that they have a new advertising campaign going. Basically, it's a picture of paddies being flame broiled with the phrase: "Meat. Fire. Good".

I expect that Harvey's clientele will go up, but their knuckles will start touching the floor.

Rail-trail project on track; EIR next
Santa Cruz Sentinel - May 2, 2003

The Santa Cruz County Regional Transportation Commission is about to embark on the biggest public transportation project it has ever seen.

On Thursday, commissioners voted to take the steps necessary to apply for $11 million in state funding to help buy the Union Pacific Rail line from Davenport to Watsonville and link the Capitola Village to the Seascape community via a tourist-carrying trolley. The commission also voted to proceed with a $85,000 environmental report.

The decision came after about two and half hours of testimony and discussion. About 100 people attended the meeting, with more than half speaking either for or against the proposal.

Which sort of begs a question, doesn't it: if, say, 60 people attended a meeting to speak either for or against the proposal, what did the other 40 people say?

I know, I know, those other 40 just sat and listened and used the points raised at the meeting to inform their own opinions. But that wasn't the first thing that leapt to mind after reading that paragraph, was it?