Salvation For A Dollar 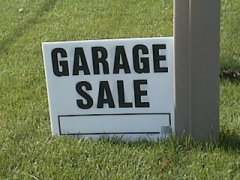 Yesterday was the condominium complex's garage sale. Don't ask me how I came to believe that it was the Sunday beforehand. Fortunately, we were prepared by the presence of signs advertising the sale, and I made time on Saturday to stand out and try to exchange our junk for money.

Sunday would have been a much better day for the sale, I'm afraid. It was all sunny and warm. Saturday morning dawned with a thunderstorm, and though our neighbours were setting up on their driveways, the merchandise weren't straying far from the garages. Still, as I was setting up, a number of dedicated shoppers came out and bought things. Then, the rains ebbed and the sun eventually came out.

During the sale, an old man wearing a baseball cap, lots of buttons, and a scarf made up of flags (I spotted the USA, the UK and Greece, among others), came up and talked to me. He was impressed by all of the houses having garage sales at once, and then he was impressed by the 3D jigsaw puzzle of Notre Dame I was selling. And then the conversation turned over to God and Jesus and how Christians were saved and happy and how non-Christians were sad. No fire and brimstone here, although he did show me a diagram of how the sun shone on Christians and everybody else walked under a total eclipse.

He handed me literature (which he himself had collected; he did not have more than one copy of any particular flyer) and bought the 3D puzzle of Notre Dame for $2. I let him have it for a buck. He gave me two slips of paper that said "God Bless You" and "Jesus Loves You" in return. And then he moved on to the other garage salespeople. Salvation for a dollar!

We made $121 that day, and managed to sell an old scanner, a television set, a microwave, most of my model railroading equipment, and a concrete garden ornament in the shape of a broken pillar (we inherited it from the house; when the woman looked it over and noted that she could paint it, I offered to sell it to her "for $2 and my eternal gratitude").

So... anybody interested in a slightly battered and cat-scratched sofa and coffee table?

Jerry Boyle is a real politician. No, he's not the caustic, moronic leader of the Newfoundland Separation Federation (played with ablomb by This Hour Has 22 Minutes' Greg Thomey); he's the Liberal candidate for the provincial riding of Cambridge.

All I can guess is, either Mr. Boyle doesn't have a middle name he can use instead of Jerry, or Jerry isn't short for Jared or Jeremiah, or he hasn't heard of or seen an episode of This Hour Has 22 Minutes, which is most unfortunate.

I won't write off the riding of Cambridge to the Conservative Party just because the Liberal candidate has an unfortunate joke of a name, but Mr. Boyle is in this race with a bummer of a handicap.

It seems that I was quite an unusual child -- I was the only person that I knew who, even as a child, called my parents by their first name. This fact shocked my grade 2 teacher, Dan's sister Lisa, and numerous other people throughout my life. But that's just the way things worked out. My parents never made me call them "Mom" and "Dad", possibly because they thought that they might have to call themselves "Mom" and "Dad" to do it.

If and when Erin and I have children, she intends to get them to call us "Mom" and "Dad". We'll see how that goes...