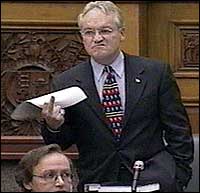 The picture on the left is of Durham Tory MPP John O'Toole, who exhibited himself as a fine example of the class act that is Ontario politics, these days. If only these acts were rare events...

In Texas yesterday, Democrat legislators, incensed at measures being passed (they would probably say "rammed through") by the Republican majority, walked out of the legislature. Denied quarum, the business of the legislature has ground to a halt, and several bills will die if this filibuster continues past Thursday. The Republican leadership of Texas has responded by ordering state troopers and Texas Rangers to "hunt down" and arrest the Democrat legislators. The Democrats are arranging to get themselves shipped out of state until this Thursday.

Although Republicans and Democrats in Texas have been at odds over a number of issues over the past few months, the one that's causing all of the controversy is a bill to restructure the districts of Texas' congressional legislation. Urged on by federal Republican House Leader Tom Delay, the Texas Assembly wants to change the districts so that the voting patterns that produced Republican majorities in Austin are reflected in Washington D.C.

You know, I could solve Texas' electoral problems right now. All the legislators would have to give me is (a) my fee of $5000, (b) two weeks, (c) a map of Texas showing county and city boundaries, plus dots representing the approximate location of groups of 100 people, (d) the number of seats in the Texas congressional legislation plus the total population of Texas and (e) a red magic marker. I could divvy up the state in equal portions. I don't know how well those portions would reflect the character of the state, but I could guarantee that since I know nothing of the state and who lives there, that my result would be blind and, thus, fair.

To do otherwise is pure Gerrymandering. Tom Delay, a Republican, is urging the Republican held branches of the Texas government to enact a law that entrenches the power of the Republicans. Does it get more cynical than that? Complicating matters is the fact that, nobody has put forward any argument to suggest that the districts that are being changed were themselves Gerrymandered. And this is because nobody cares particularly about the Gerrymandering; they only care if it is occurring in their favour! Anybody who advocates altering the structure of a legislature so that it produces a desired result cares less about democracy than they do about power, and that is simply disgraceful, and very clear symptom of what is wrong with America.

It is, unfortunately, not uncommon, nor particularly American.

In Georgia two years ago, there was a similar fight between Democrats and Republicans when Democrats blatantly tried to restructure the state's districts to produce more Democrat majorities. Their defence: "The Republicans would do it themselves if they could." Gerrymandering is not a current issue in Canada so far, but in our history, the oddly shaped provincial ridings of Ontario and the political structure of Vancouver were deliberate attempts to quash the political voice of the working class. We shouldn't be complacent, especially when legislators in Queen's Park are close to fistfights, and certain Canadian Alliance members call Canadians "mindless sheep" threaten Alberta separation if Ontario doesn't vote their way.

All this represents an unfortunate trend in Canadian and American political discourse -- or lack thereof. It no longer important to people that the best decision be reached. It's more important that *their* decision be reached, because of course their decision is the right decision, and only stupid idiots and unAmerican traitors would think otherwise. The Bush Administration, blatantly wrapping itself in the flag (going as far as to reschedule the 2004 Republican Convention three miles from Ground Zero and nine days from the anniversary of September 11) is only the tip of the iceburg; this phenomena is not limited to any one political party, and as the 2004 presidential election approaches, it's not a phenomenon that's going to go away.

We have all become selfish and self-centred. We refuse to see other people as having legitimate disagreements with us. It is a blight on the American and Canadian political landscape that is going to do increasing damage if we all don't get a reality check and start listening to each other with truly open minds.

Eventually a decision must be made, and some people aren't going to like the outcome, but as long as everyone has had a real say in the outcome, democracy is well served. Attempts to limit debate, marginalize dissenters and manipulate the system to produce a desired result is a direct threat on democracy akin to the worst Saddam Hussein could have done to us.

It's the golden rule: "love thy neighbour as thyself". Too often, we speak of "us versus them" and we see "them" not as human beings, but as the enemy. Well, let me tell you that there is no "them". There is only "us". And the time has long passed for us to stop punching ourselves in the nose.

In happier news, the world still has possibilities when even marketing people can be this wonderfully creative. Check out this ad. It's just... neat!

Thanks to Rick Jessup for the link.

My passport arrived today, about a month after I could have used it, but then I knew it was going to be late and there weren't any problems at the border. The photo looks good, and it's really a nice-looking document.

On the other hand, American customs officials are a little red-faced after a seven-year-old Ontario boy walked across Niagara Fall's Whirlpool Bridge into the United States without being noticed.

Now, admittedly, a seven-year-old boy represents a smaller threat to national security than a bunch of men smuggling in guns, but it sort of puts the lie to Canada having lax security along the border. Our officials seem to be doing a good job keeping threats out of our country. True, Americans might worry about terrorists leaving Canada for the United States, but the responsibility for that lies with American customs agents, not us (though, depending on what John Manley and Tom Ridge work out, we'll probably be happy to help out)

At least Americans can sleep a little easier that it's less likely that terrorists will be entering America from our side of the border.