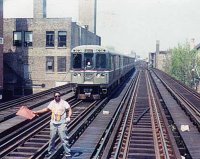 You don't get many cities thinking about subways in North America these days. New York is, but most of it's construction is related to the rebuilding of the train network destroyed by the events of September 11. In other American cities, light rail is the way to go. Although light rail lines don't carry as many people as subways, they are cheaper to build, and they have the high-tech buzz about them that make them desireable projects. In Canada, Toronto and Montreal can only dream of piecemeal extensions to their subway networks; no government is interested in investing major capital on subways these days.

Then there is Chicago.

Searching through some web pages for my Chicago trip report, I revisited Chicago L.Org and was, once again, entranced (it's an excellent website). The section on Transit Plans intrigued me especially, for it looks like Chicago may be about ready to build...

Recently, Chicago has been contemplating building a new subway line. The circular line, a "super loop", could substantially enhance Chicago's subway network, building eleven new links between the "L" and the city's Metra commuter rail network. Travel times between major trip generators could be cut. Land development around Chicago's growing downtown could be given a substantial shot in the arm.

What makes it more likely that this plan will see the light of day, however, is that it's cheap. Chicago could build it in three phases, for just $1 billion.

$1 billion for a 6.6 mile long subway that enhances the public transit network of the city and spurs centre-city development? Toronto spent just under $1 billion (albeit Canadian money) for 6.4 kilometres of new line out in the suburbs which, although beneficial, still requires another billion and several more kilometres to operate at full effect. How does Chicago do it?

Well, for one thing, Chicago builds it cheap, but effective. The first phase of the line already exists: 0.75 miles of elevated trackage that hasn't seen a paying passenger in decades. By rebuilding this small section to handle passenger traffic, Chicago gets on track towards revamping its rail network, and brings the home of the Chicago Black Hawks within reach of a subway station (just like Comisky Park and Wrigley Field). The rest of the network comes together almost as easily; Chicago already has elevated trains, and its citizens are used to their effects, so its politically feasible to build another such line. Finally, phase two and phase three represent the completion of a circle that's already half-built. Chicago already has much of the infrastructure it needs to build an effective transportation system; it only needs to connect the pieces so it can use it properly.

It would be nice if Toronto could find itself a project that could enhance its subway network at such a bargain price. But Toronto is not like Chicago in a number of key ways. There isn't a lot of underused subway trackage for the TTC to make use of. Chicago has many abandoned stations as well as abandoned lines; Toronto has just one abandoned subway station. Two of its three subway lines are operating near capacity, so there's little hope of rejigging schedules to add more service.

Then there is the question of what Chicago's Circle Line is supposed to accomplish. Chicago's big problem has been the derelect and deindustrialized lands surrounding the downtown core. Travelling up the Green Line alone Lake Avenue, I saw dozens of abandoned lots and run-down buildings; an urban wasteland that would be a place to steer clear of after dark. However, Chicago's downtown is undergoing a renaissance, with new condominium developments swelling the population. If better infrastructure was in place, this development could expand beyond the loop and into the derelict lands waiting for something (anything!) to arrive.

Toronto's big problem is its low density suburbs. If the city hopes to contain urban sprawl, it needs to export downtown densities and diversity to the suburbs. And this is what the Sheppard line is designed to do. Unfortunately, with no underused infrastructure to make use of, and no history of elevated trains to get the idea past the proposal stage, building the rest of the Sheppard subway line is going to cost us. But given the effect the Sheppard stub is already having on Sheppard Avenue (significant new development), it's a bullet we'll have to bite.

Chicago is going to substantially improve its city with very little capital outlay. Toronto is looking to spend billions more over the next twenty years. But then, Toronto doesn't have the problems that Chicago is about to fix, and for that perhaps we should be grateful. We have a good city, but we still deserve better, and even if that costs more, it's worth it.

Still, there's always the Portlands and the Waterfront that Toronto's hoping to redevelop. And the TTC does have property (in the form of its Greenwood Yards) running south from the Bloor-Danforth subway to the southern cross-town railway line... You know, it is possible to see the TTC running a line south from the Bloor-Danforth subway, alongside the Greenwood Yards and then the CN railway tracks to Union Station.

It could be done, you know: a surface line parallelling the freight and commuter railroads would be cheaper to build than a full-fledged subway. It would serve already dense and diverse neighbourhoods, so the ridership would be there. It would give the Portlands development a boost, and angled right it could follow the railway tracks into northwestern Toronto... possibly with a connection to the Airport.

But that runs into the Federal Transport Minister's pet project: to build a high-speed rail line between Union Station and Pearson International Airport. That's another story for another day.

Still, it is nice to dream isn't it?