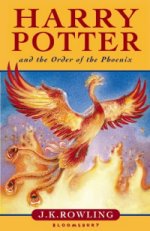 In ten days time, the new J.K. Rowling Omnibus, Harry Potter and the Order of the Phoenix will come out. Thankfully, no trees will be killed in the making of it, as the entire line (in Canada, at least) will be printed on post-consumer recycled paper, quite possibly making the recycled paper industry viable, if it wasn't before.

I'm looking forward to the release (even if the book stands at a stupendously massive 768 pages), although I won't be first in line to get a copy. In fact, I probably will wait a few weeks. And I may avoid the bookstores for that weekend. Indeed, I may even skip town.

The Harry Potter hype machine is about to go into overdrive. For many, it will be a very large and very fun party, but for a killjoy such as myself, it's going to be impossible to get any writing done. Every Chapters is going to be flooded. It will be like the last Saturday before Christmas at your average suburban mall, and I have to tell you that in these situations, I get a little claustrophobic. Ah, but the fans will be happy, and more power to them. I hope they weather the backlash. 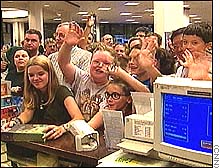 Hype generates backlash. Witness how Harry Potter was listed among the 50 most hated characters in Britain in a recent poll. Betcha didn't know there were that many Death Eaters in the United Kingdom, but there you go. When things are promoted to the degree that we're about to see; when people can't escape images of the boy wizard, they'll resent it. This isn't the first time people have wrung their hands over the Harry Potter 'fad', and it's not a phenomena limited to books.

Bill Gates' already poor reputation took yet another hit with the overhyping of his new operating software, Windows 95. The marketing machine of Microsoft was everywhere, lighting up the Empire State Building, in one case. More recently, there was the butterfly sticker promotion of MSN 8, that almost netted Microsoft 100,000 separate charges for littering. That certainly attracted publicity, though not the kind Microsoft wanted... When something needs to be marketed to such a degree, things are out of whack. For some, the story becomes more about the hype, and less about the product. 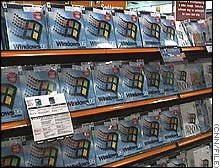 Then there are CDs, movies, etc. I guess it's so common, you don't really notice its prevalence until you look. If Harry Potter's following raises more eyebrows, it's possibly because it's rare to have such hype surround a children's book.

My mother and I both contribute, in our own small way, to hype backlashes. We both view excessive marketing as fakery, a lot of sizzle to sell little steak. Maybe it's a cynical reaction, but when something gets marketed to such a degree, with countdowns in Times' Square, or special days in baseball parks, it detracts from the product. Something good shouldn't need so much hype; perhaps it isn't so good? And I think my mother and I are more descerning than some. For others, all hype is the same, from American Idol to Windows XP. If it's hyped and commercial, it's crap.

Then there is the comedown from the hype. If not handled well, it could be disappointing. Millions of books have been printed on the expectation of the first week's volume of sales; what happens after that? I suspect that by waiting a month to purchase my book, I'll be getting a 30-40% discount (that's Chapters' standard practise for bestsellers). In the quiet hangover following the biggest party, killjoys' voices raise louder. The sharp drop-off in sales becomes news. Is the bloom off the Harry Potter rose? You know that the columnists are just itching to put that in their headlines, even if such statements are as fake as the initial hype.

Whatever the case, there is the product, and then there is the hype, and I'm mostly able to separate the hype from the product, and enjoy the Harry Potter series on its own merits. And I don't begrudge the children (and the adults) who will troop on down to Chapters on Friday, June 20, in costume, for the biggest sleepover party in history. For most of these people, this is not hype, this is just fun. But maybe we should back away from the gigantic print-ads (I know it's coming out June 21st! I've seen the advertisement two dozen times already!!!), or Harry Potter days in our local major league baseball parks. Concentrate on the book itself, listen to J.K. Rowling read, read it yourself, discuss the story, and have fun the way you want. Don't let's have the logo shoved down our throats. I think Harry Potter has a loyal enough and active enough readership base that the book will get by on word-of-mouth alone, and such a marketing movement would be more genuine, and probably longer lasting.

I will say one thing about J.K. Rowling and the marketing movement around her. It has led to a resurgence of reading, especially in young adult fiction. And the two-and-a-half year wait between books certainly didn't hurt, either. I've heard, in newspaper reports, and from the mouths of bookstore managers, that ten years ago, children's fiction was on the wane. Now, it's one of the larger sections in the major bookstores, and these sections don't just feature books about wizardry schools either. Erin and I have been reading Five Children and It and The Phoenix and the Carpet by the late Victorian children's writer and Fabian socialist E. Nesbit. These paperback editions were recently re-released under the Penguin Classics banner, and I'm pretty sure they were hard to find five years ago (though I remember my mother reading Five Children and It to me when I was much younger. Then there's Jenny Nimmo's resurgence in popularity

J.K. Rowling did that. And whatever you say about Harry Potter hype, I suspect this restores the balance in her favour, and then some.

A Trip Down Memory Lane