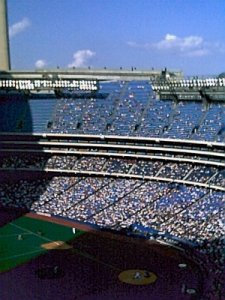 Wendy and Lars arrived at our place around 2 p.m. The big draw for this visit, after seeing their favourite brother-in-law, was going into Toronto to see the Chicago Cubs play. The game was set for 4 p.m. Lars fretted about being late and missing the national anthems, so we drove into Toronto soon after their arrival.

We missed the anthems, but not by much. We found four seats in the upper Skydeck -- real nosebleed seats, but with an excellent view of the field. The Skydome may have been an overpriced monstrosity, but their field views are excellent. We settled in, and I bought some overpriced ice cream, after wandering the halls reliving some of my experiences when I'd worked there, in one of the snack food bars (hey, we all have to start somewhere). McDonalds had the concession when the stadium opened in 1989, but things appear to have changed. By this I mean that the concessions now bear Pizza Pizza and Mr. Sub logos. Some of the equipment is as I remember it, and even in the positions I remember it.

The Jays lost. Lars risked life and limb cheering for the Cubs, and chatted with a good-natured fan ("I'll cheer for Sammy Sosa... Oh, wait! I can't!) about the stadium, and baseball in general. The game was close straight through to the end, and we headed out with the crowds (no sellout, but still over 30,000) and went to Harbourfront to look around at sailing schooners and look for dinner. On our way, Lars encountered his second Toronto celebrity sighting.

Back in December, we boarded the same subway train as Mike Myers. Now, leaving the Skydome, who should Lars run into but Steve Stone and Chip Caray!

Surely you've heard of them? The announcers of all Chicago Cubs games on the Chicago superstation? They were just off announcing the game at the Skydome, and they were crossing Queen's Quay with us!

Well... Lars was excited. And I admit I was too startled to think of snapping a quick picture. Oh, well. But Lars' average for celebrity sightings while in Toronto is surprisingly high (2 for 2).

We ate at a Thai place Erin and I discovered (with Teri, Wayne and Marguerite) last Christmas and then crossed Queen's Quay to an open-air clothes and crafts market, mingling with the diverse crowds while the sun set. 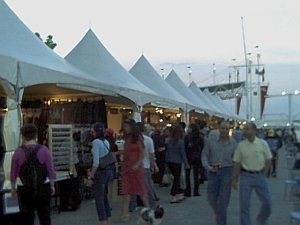 Harbourfront has been criticized for becoming a wall of high-rise condominiums blocking the lake as effectively as the Gardiner Expressway and the railway corridor, but walking through it, it's hard not to see the successes. I remember how the area was a beautiful wasteland of derelict warehouses just fifteen years beforehand. Now, at all hours and in all seasons, Queen's Quay teems with people. It may have become a corridor of steel and glass buildings, but it's a place where people congregate. With walkways, bike paths, specialty shops and a new streetcar line, you can feel the city pulsing along Queen's Quay. They should try to shoehorn more parkland between Spadina and Yonge, but the visionaries who launched Harbourfront should be pleased by its success, I think.

After the sun set, we headed north along Rees and John Street, stopping in Movenpick for crepes and coffee. Then it was time to go home.

I have pictures below.