After the Argument II 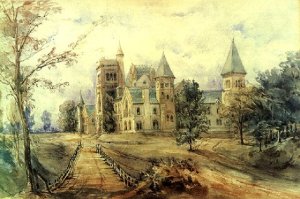 I sent off two resumes today, both planning jobs in Guelph. I’m particularly excited about the Heritage Planner one, which seems right up my alley, and a very interesting alley it is. More resumes will go off tomorrow.

I spent some time at the Krispy Kreme as well, sitting and writing. This particular location, at Ottawa and Strausburg, is a surprisingly good one to write in. I find it quite hard to get quality writing done at Tim Hortons… I’ve been pushing ahead on chapter seven of The Young City, dealing with the aftermath of the argument, and getting the plot with villain Aldous Magnait really moving. Also, the story’s environmentalist bearings are shown (read, bludgeoned into the reader’s skull with the subtlety of a brick). Here is an early draft of the scene I worked on today.

After Peter and Rosemary have had their argument, Peter has stormed off, gotten himself lost, and been rescued by strange behaving wolves. Now, dropped off outside the construction site where Taddle Creek is being buried, the story continues…

Peter wilted into the heat of the wood stove. Tom Proctor sat down across from him and unscrewed a metal flask. He took a swig, and then offered the flask to Peter.

Peter stared at it. “No thanks.”

He took the flask, sniffed it, then took a sip. He stared. “Apple cider?”

Tom chuckled. “You thought I was imbibing whiskey, son? Not at my age. I wouldn’t last long at this job if I didn’t keep a clear head.

Peter took another sip, then handed back the flask. “Thanks.”

“You’re not imposing,” said Tom. “And you need something warm in you after being caught outside in this evening. What were you doing out so late, anyway?”

Peter curled into himself. “Walking.”

Tom laughed. “Ah! The most difficult journey of them all. I’ve walked to nowhere quite often in my time. Sent there by my wife as often as not.”

“I was, rest her soul.” He sighed. “Yes, she sent me on errands to nowhere, but they were still good times. Sometimes I just needed my space.”

“Or she needed her time,” Peter muttered to himself.

“And does she love you?”

Peter hesitated. He curled into himself again. “I-I don’t know. I think so—”

Peter looked up, hopeful. “You know this?”

Tom nodded, but he looked a little sad. “Forget what they say about men being the head of the household, son. What you have in a marriage is two people under God, and you’re both ornery. But that’s the way God made you, and you have to be patient with that. You have to understand.”

“I’m beginning to,” said Peter. He drooped. “I was so stupid. You think she’ll forgive me?”

“Ask her yourself.” He got up and dished out a plate of stew. This he handed to Peter while he took up the pot. The cabin held a cot, a trunk and a single shelf of books. The room was small enough to be lit by a single kerosene lantern.

Peter stared at the surroundings. “Do you really live here?”

“What will you do then?”

“Look for more work, I suppose.” Tom sat back on the cot. “I’ve been with the University for years, helped to build King’s College, taking whatever work they had to offer. Even in the worst of times there are buildings that need to be built, and rivers that need to be buried. There may still be work for somebody as old as me.”

“What will you do when you retire?” asked Peter.

“Retire?” Tom’s laugh was like a gunshot. “You make it sound so easy.” He grew more serious. “I have a little money saved up. Not much, but it will cover me for a year. I have a son in Kingston, married four years, with a good wife and a young son of his own. I hate to be a burden, but perhaps when I hang up my cap, I shall have to live with them. And maybe sooner rather than later. After this creek is buried, my job here is at an end.”

As Peter stared, Tom’s eyes glazed over. He stared out into the construction site, and back in time. “You wouldn’t know it, but this creek used to be a treasure for the University. I picked berries here. As part of their initiation rites, the students would duck freshmen in the pond we just drained. That joke wasn’t nearly so cruel two decades ago. Less than a month from now, this creek will vanish forever.”

“Then why bury it in the first place?”

“It was in our way,” said Tom, staring at Peter as though he’d missed the point. “And then there was the cholera and the typhoid+ though, I remember, the river held no cholera before the city stretched this far.”

He stared out onto the grounds again. “I’ve seen this city change so much. I was born the day the Town of York became the City of Toronto; ten years before, mind, but the very day. What a mighty celebration I had on my tenth birthday. There were ten thousand souls in the city that day; now I hear there are almost nine times that number. We could walk across the city and not be footsore, then; no need for streetcars to carry us.” He took a swig from his flask. “All these people, pushing out to the University, beyond the University. Where will it end?”

Peter accepted the proffered flask and took a swig. “Where indeed. But if you feel this way, why are you helping to bury Taddle Creek?”

Tom shrugged. “A man has to make a living somehow. Besides, I lived a lot of my life near this stream. It seems fitting that I should be there at the end. At least someone will tell its tale.”

A howl rose in the northeast, echoing off the buildings in the south. It was joined by others in a low chorus. Tom started, stood up and stepped to the cabin door. “That’s a sound I’ve heard less and less in recent years.”

Peter stood up. “The wolves?”

“There’s a bounty on them,” said Tom. “And they hate the cleared field. I thought they’d all vanished.”

Peter blinked. “What is it—”

“Somebody is sneaking through the site.” Tom reached for a plank of wood that stood propped by the door. He motioned for Peter to follow.

The cold rain had stopped and the muddy ground was crusted with frost. The sky had cleared and a waning moon cast the site in shadow. Peter and Tom crept past the gate and between the piles of timber.

“How did they get in?” muttered Peter.

“They’re in the river bed. They must have come through the back way.” His voice rose to a shout. “You there!”

The lip of the embankment surrounding the creek was before them, the slight rise a shadow in moonlight.

“I know you’re in there!” Tom continued. “Nobody has stolen anything from here on my watch and tonight will be no different. Come out now and I’ll send you away with a bug in your ear! Don’t make me come in after you!”

There was silence. Tom’s voice echoed back from the hills.

“I’m warning—” But before he could finish, four shadows leapt into the moonlight, like soldiers from a trench. They barrelled into Peter and Tom, knocking them over. Peter grabbed an ankle and twisted. His assailant cried out and sprawled. Peter grabbed at the flailing legs, then grunted as a kick landed solid on his shoulder. His quarry scrambled up and ran after its friends, limping all the way.

I realize the “Sometimes I just needed my space” phrase is out of period, but it does couple nicely with “Or (Rosemary) needed her time”. I’ll work on that and see what I can do…