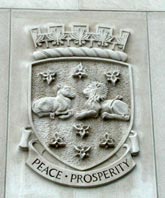 Yesterday, councillors for the Regional Municipality of Waterloo, supported by the member municipality councils, unanimously approved a Smart Growth plan that will manage the region's development until 2041, when a population of 700,000 is expected. The region's current population is just over 420,000.

The plan draws a firm countryside line around the cities of Waterloo, Kitchener and Cambridge as well as small portions of Wilmot Township (the village of Mannheim) and Woolwich Township (St. Jacob's Farmer's Market and the lands around the Kitchener-Waterloo Airport near Breslau). Most of the townships of Wilmot, Wellesley, Woolwich and North Dumfries are excluded, along with portions of Kitchener (southwest), Cambridge (northeast and the area near Blair) and Waterloo (northwest). The plan also calls for an LRT to be built along the spine of the region, as soon as funding can be arranged.

The plan has the general support of the residents and businesses of Waterloo Region. Some businesses have expressed concern that industrial space will be constricted, and some developers have raised the prospect of rising house prices as a result of restricted greenfield development, but the council addressed some of these concerns by setting aside land in reserve, to be used for extra growth if needed.

Unless the region has severely underestimated the growth of this area, this is a plan that should contain urban sprawl and retain the rural character of Waterloo Region. This is quite an accomplishment; even moreso if we can count on future councils to abide by these rules. Fortunately, the unanimous support for this plan, and the support it enjoys among the general public is a good sign that this will happen.

Contrast this with the struggle to get Toronto's official plan through its fractuous and dysfunctional council, and the questions over whether or not it can be effectively implemented. Yes, I am comparing a region of 420,000 residents with a city over five times its size, but the most telling difference here is what, exactly, the Region of Waterloo and the City of Toronto administer.

The City of Toronto covers less than half of the socio-economic, amorphous, multi-centred urban region that is the Greater Toronto Area (or Golden Horseshoe, if you'd prefer). The Region of Waterloo controls all of the urban development associated with itself. There are socio-economic links between Kitchener-Waterloo and Guelph, but Waterloo's urban form is still buffered by acres and acres of rural land ahead of its political boundaries. It can draw a line around its urban sprawl and make it stick. Toronto can't -- not without meeting with and getting the municipalities of Mississauga, Brampton, Vaughan, Richmond Hill, Markham, Pickering, Oakville, Milton, Halton Hills, Caledon, King City, Whitchurch-Stouffville, Uxbridge, Scugog, Ajax, Whitby, Oshawa, East Gwillembury, Georgina, Burlington and Hamilton to agree.

Not to mention the "Regional" municipalities of Halton, Peel, York and Durham...

There is no sanctioned forum for Toronto to meet with its political partners within the GTA to hammer out an agreement that affects everyone's futures. The players are only just beginning to understand the need for such a forum.

I am still optimistic that the Greater Toronto Area (or Golden Horseshoe) will pull something together. Torontonians (including everyone living in the GTA) can move quickly and effectively when a gun is pointed at their heads and cocked. In the meantime, however, Waterloo Region will have agreed to its own future, and will be well on its way towards going forward into it.