The Little Train that Couldn't 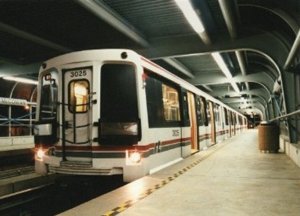 I have conflicting feelings about the Scarborough RT. On one hand, the cars are cute, the stations modern, and the service fast and (mostly) reliable. On the other hand, the Scarborough RT was a transit mistake, robbing Scarborough of the beginnings of a high-speed streetcar network and starting the long pause in subway construction that put Toronto far behind where it needs to be. I wrote a full history on the Scarborough RT and its controversies elsewhere, so I won't go into that here.

There is no doubt that the Scarborough RT has become a vital component of the TTC's rapid transit network. Connecting the end of the Bloor-Danforth subway line to the Scarborough Town Centre (featuring a mall, civic offices and extensive condominium developments), its cars are jam packed with passengers, especially at rush hour. Everybody wants to ride the line, it seems; and that's the problem: the TTC doesn't have the room for them.

The Scarborough RT vehicles are small, each with a capacity of about 75 passengers. Four car trains ply the lines at 4 minute intervals, and so the line can only shuttle 4500 passengers per hour from one end of the line to the other. More than that want to ride. The TTC has installed a competing express bus bypassing the line, but it's not enough. The TTC could add two cars to each train, but it doesn't have the equipment. The design holder (formerly UTDC but now Bombardier) no longer makes these vehicles, and the replacement design can't handle the tight curves of the line.

The TTC identified upgrading the Scarborough RT as high among its priorities for a modest-but-fiscally-realistic ridership growth plan (2.1 Mb PDF file). If they can find compatible used equipment (possibly from Vancouver or Detroit, which run similar systems), then the problem is solved, for now; but new equipment will have to arrive eventually. The Scarborough RT vehicles have a 30-year lifespan and that comes due in 2015. Upgrading the line to handle Bombardier's "Mark II" vehicles (link courtesy this site) would cost $120 million and require a 2-year shutdown.

In my opinion, the TTC's best option is being overlooked. It might be expensive to implement, but it makes the most sense over the long term: extend the Bloor-Danforth subway to the Scarborough Town Centre and abandon the Scarborough RT.

The Bloor-Danforth subway runs east-west at Kennedy station, while the Scarborough RT heads north in very short order. To follow the Scarborough RT's route, the TTC would have to build a long turning loop beneath Lord Roberts Drive (a residential street). The Scarborough RT would have to be shut down for construction and it would take four years to get it open again. So I suggest that the TTC doesn't follow the same route; instead, tunnel beneath the same abandoned railroad right-of-way that takes the subway to Kennedy station (this right-of-way has since been developed over northeast of Kennedy, so at-grade operation is impossible). Have a stop at the Lawrence/Brimley intersection and approach the Scarborough Town Centre from the south.

You'd lose the Scarborough RT stops at Ellesmere, Midland and McCowan, but ridership at these stations is much lighter than at Kennedy and the Scarborough Town Centre. And if you really want to keep serving these underused stations, keep the Scarborough RT running. The current equipment can handle the reduced crowds and, when the time comes to replace the vehicles, use modified streetcar equipment from the rest of the system. Maybe then the RT could be extended elsewhere as part of a growing streetcar network for Scarborough -- as was the original plan back in 1975.

Of course, unless the TTC wins commitments for its modest ridership growth proposals, even the cheaper band-aid solutions won't be possible. The TTC would then be well and truly screwed.