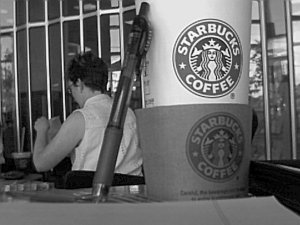 We had a pretty good day of travelling, yesterday. Erin and I got into the car and drove to Ayr, then Paris, then Dundas, Ontario. I took some pictures, but I don't have time to upload them, right now. I'll do that later today.

We enjoyed walking around our towns, but one thing that kept us moving was the lack of adequate writing space. Erin and I go out to write because it's excellent incentive. If you've driven miles to a place, specifically to write (well, not specifically, but your pen doesn't know that), then you don't want to disappoint yourself. So you write. Coffee shops are usually the best places to write because they're climate controlled spaces with tables and an expectation that you can sit for a while. Some coffee shops are better than others, however.

A good writing space must be relatively quiet, and it must have large tables, so you can really spread yourself out. The lighting and the ambiance must be soothing, not glaringly fluorescent or otherwise bright as appears to be the case in Tim Hortons or other related donut shops. The proprietors must not look at you oddly and appear to covet your table space.

Disappointingly, it seems as though summer is a harder time to write in coffee shops than winter. There's a lot more foot traffic in summer, it's harder to find a table, and fruit smoothies are a popular drink. The sound of a blender going is harder to concentrate over than the sound of a milk steamer. The time of day also has an effect; my favourite local spots are excellent spots to write in the early morning, but become harder to handle on the weekends. Unfortunately, that's when our free time is.

Erin and I have started to collect a list of favourite coffee places where we like to write. Here are some, in no particular order:

Chapters - Waterloo, Kitchener, Guelph: These Chapters all have Starbucks coffee shops attached to them. The ambiance is quite good, with soft lighting and earthy colours abounding. There is something about being surrounded by books that makes it easier to write. Of these stores, Waterloo is the best as it has the most available seats, and plenty of large tables. The Chapters in south Kitchener has a similar ambiance, but fewer seats, and fewer large tables. The Chapters in Guelph's Stone Road Mall does all right, but the space is smaller, and you can find yourself rather close to the milk steamer or, worse, the fruit smoothie blender.

Krispy Kreme - Kitchener: Erin hasn't tried this place out, yet, but I have. And for some reason, the things I said about donut shops not having a good ambiance for writing don't apply here. The decor is bright, but it's stylized, to a sort of 30's art deco chic that's interesting to look at, but easy to ignore. It also helps that this Krispy Kreme has not done spectacularly well in this land of Tim Horton's. There is plenty of space, and the managers don't mind you making use of a wide table for a while. Best of all, when you need to look up at something, while your mind works away, the donut-making machine provides a fascinating subject to rest your eye on. The coffee isn't bad, and if you come before 11 a.m. on a weekday, or any weekend morning, you get a free donut hot off the rack.

Indigo - Burlington: The Indigo bookstore in the plaza at Brant Road and North Service has turned out to be the most consistently good place to write on our trips to Oakville. Although owned by Chapters, Indigo's coffee places aren't Starbucks, they're their own cafe. This one, and the one at the Yonge-Eglinton Centre in Toronto have large tables and good ambiance. The blender doesn't go off in your ear. The only quibble is that you don't get Starbucks' selection of drinks, but if you're only drinking tea (and you should, in order not to break the bank on your writing trips), Indigo's cafe has plenty.

Downtown Oakville: There are four places to write in downtown Oakville, and Erin, Dan and I have sampled three. Bookers Cafe has an excellent bookstore and a gourmet coffee shop, but the coffee shop has not had a good writing ambiance during the summer months. The kitchen is too close to the tables and the place is very noisy. Colbourne Street Cafe, next door, shows promise, although the tables are a little small, and you get a sense that the proprietors covet your space. The Green Bean Cafe in George's Square has wide tables and soothing ambiance but can be crowded, especially in the summer months. Finally, there's a Starbucks on the north side of Lakeshore Road, but Erin and I haven't tried it out. It seems almost sacreligious to do so while there are so many independent coffee shops begging for our business.

Stratford: The best place to write in Stratford is, in our limited experience, Balzac's. This place is all about coffee and serves up great drinks at reasonable prices. The tables are large and they don't mind you sitting in them for a while to write. I've been told that Jane and Tony Urquhart actually sat beside us at a nearby table, so if this place doesn't have good writing karma, I don't know what does. Balzac's can be loud (it's full of hard surfaces), but it's still possible to work over the noise and be pleased with the results.

I'll have to continue this coffee shop review in a subsequent post. If you have suggestions for good places to write (it doesn't have to be a coffee shop), feel free to comment. Erin and I look forward for your suggestions.