How Can You Keep 'em Down on the Farm...

Here are some pictures from our drive to Ayr and Paris (mostly Ayr) on Sunday:

I'm pleased to report that I've made more progress on the Trenchcoat Farewell Project. I've laid out the Ninth Aspect 2 story, A Common Disaster, meaning that there are just five stories to go. The Black Files still has artwork to be scanned, but it should fall next, perhaps by this weekend. All-in-all, things are looking good.

It's been interesting reading the comments to my blog post reviewing various coffee shops as places to write. I'll add to the list shortly, but right now I'd like to respond to Rick's comment. Chapters is a far better place to write than Indigo, but the Burlington branch of Indigo is an interesting exception. I haven't been to many Indigos, but I have tried to write at the Indigo at the Yonge-Eglinton Centre, and it's a bit of a disaster. The tables are large, but there are hard surfaces everywhere, and it's a two-storey tall space. The atmosphere is loud and you feel very small.

Burlington's Indigo, on the other hand, doesn't have this problem. The cafe is right in the centre of the bookstore, and I really can't identify much that is blue in its space. The whole store is a box, and while the ceilings are high, they're not two-storeys high. You are surrounded by books, and there are plenty of soft surfaces to sooth the loud noises. Best of all, there are large tables and plenty of them. Erin likes to curl up to write, and there are a bunch of curl-up chairs as well.

We've had inconsistent results with our treks to downtown Oakville. Sometimes this spot is just too popular, and it's impossible to get a good writing seat in the coffee shops. However, our Oakville writing trips have always been rescued with stops at the Burlington Indigo.

Chapters has a similar range in its stores. The weekend before last, Cameron, Erin and I paid a visit to one such store on Bloor Street, just east of Avenue Road. This was a fascinating three-level design, but the Starbucks was cramped and so full of traffic that it was an impossible writing space. Far more promising was the Chapters-less Starbucks on the corner of Yonge Street and Rosehill Avenue, just south of St. Clair. This space had patrons, but it had empty seats, and it was tucked away slightly from the street so that the feel was of a cozy nook where one could watch the city go by.

Of course, Toronto has plenty of excellent writing spaces. There are towns that Erin and I would like to explore more thoroughly for coffee/writing spaces. Dundas has the fantastic scenery of its mountain, but its downtown tends to be closed on Sundays, and the coffee-drinkers appear to prefer Tim Horton's to Starbucks or some independent coffee shop. That's really a shame. And Erin and I were impressed by Owen Sound; unfortunately, we keep forgetting to go out there on a Saturday when everything is open.

A good overview shot of Paris (not mine) is below: 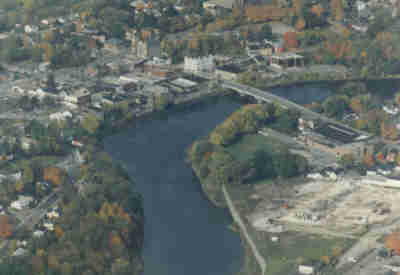