Between the Present and the Past 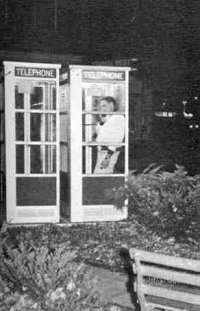 Here's yet another sign that Erin's upcoming book, Ghost Maps is just a few weeks away: Erin's book is now listed on Amazon.com!

This is so amazingly cool!

The official launch is September 17, in Toronto. Her tour of the Maritimes takes place in early November...

Yes, after thinking over time portals two days ago, I've decided on portals between two points in time, moving forward in sync. This simplifies the time travel aspect of the story, and gives us some juicy dramatic potential to savour. Rosemary has called her mom, three months after she fell through into 1884.

The scene is included below. It's still close to a first draft, but it's stronger than the earlier versions of this part of the book, when I was dinking around with a 1950s setting. If there is still a problem, it's that a lot of exposition between Faith and Rosemary still comes out, and I'm worried that this clutters up the scene. It is rather long...

"Phone, phone, come on, I know the phone's been invented by now." Rosemary stumbled along the sidewalk, looking around frantically and muttering to herself. She ignored the stares of the stray men in business suits, who stepped off the sidewalk to let her pass.

Faith ran after her, darting around the people, frowning at a decrepit man huddling in a doorway, stumbling amongst the sights and sounds before she finally caught up. "Rosemary please, slow down! Everything is so fast, I can hardly keep up. How can this be your home? What is this place?"

They reached an intersection. Faith caught Rosemary's arm and turned her around to face her. She pointed at the horseless carriages, the massive, rumbling streetcar. "This is not the city I live in!"

"I know." Rosemary fidgeted. "I mean, this is where I came from, before I met you. And I have to call someone."

"Rosemary..." There was a rising edge to Faith's voice.

Rosemary pinched the bridge of her nose. It was a struggle to think over the sound of the traffic. Think what it must be like for Faith. She took a deep breath. "How am I going to explain this... are you familiar with the works of H.G. Wells?"

"War of the Worlds? The Invisible Man?" She stared. "Do you read anything other than medical textbooks?"

Faith huffed. "I have never heard of this H.G. fellow in all my life!"

Rosemary slapped her forehead. "You're before his time!" She rubbed her brow. "This is going to be harder than I thought.

"Look," Rosemary snapped. "How hard is it, really, to believe? Why do you think we talk so funny? Why did our clothes look so strange when you found us? Why else did we have so much trouble understanding the value of your money? And now you and I have walked through another portal, after coincidentally using the same sewer system Peter and I struggled through when we first came here, and we've found ourselves in my time and place! Isn't that the only explanation that makes sense?"

"But this is the stuff of Lewis Carroll!" Faith yelled. "You cannot be serious!"

Rosemary gestured at a passing taxi. It honked at them, and breezed past. Across the street, passing youths whistled and jeered. Faith stared about, going pale.

Rosemary turned away, throwing up her hands. "Think what you like. I have to phone home." The light turned and she started across the intersection.

Faith ran after her. "A telephone? Why?"

Rosemary closed her eyes. "Because it's been three months since I talked to my family. I don't even know how long it's been on this side of the portal. I have to tell them I'm all right. Now, either you help me find a phone, or stop asking me stupid questions!"

"I see a sign for one, there!" Faith pointed to a row of booths at the side of a building. Rosemary strode for it, but Faith held back, staring. "They do not look like telephones."

Rosemary squeezed her skirts inside the battered and scratched booth. She wasn't the least bothered by the smell. She closed the door behind her and took a deep breath in the sudden, relative silence. Then she picked up the receiver.

She stared at the coin slot a long moment, shocked at the high price of phone calls these days. Then she remembered she wasn't dealing with 1880 quarters. Not that this meant much; she didn't have any quarters, and Theo hadn't had a phone hooked up the day they'd moved him into his apartment.

That meant her parents, whom she could call collect.

She flicked the cradle and, as soon as she got a dial-tone, jabbed at the numbers.

Then she stopped, and blinked at the phone's LED display. She pressed the cradle and stared as the phone's time and date came up.

It had been late August when they'd help Theo into his new apartment. She had thought that time moved differently on either side of the portal; how else could Theo not have heard and called for them. But clearly, three months in 1884 meant--

She hung up the phone and stood, motionless, her hand frozen halfway to her side. After a long moment, she reached for the phone tentatively, hesitated, then plucked it from its cradle. Another hesitation. Then she started to dial.

"Thank you for choosing Bell Canada," chirped the automated attendant. "If this is a collect call, please press one, now."

Rosemary pressed one. The tone blared in her ear.

"At the sound of the tone, please state your name." Beep!

Rosemary found that her throat was dry. "R-Rosemary," she croaked. "Rosemary Watson!"

"Thank you," said the computer voice. "Please stay on the line while I see if your party accepts the charges."

A phone rang at the other end of the line. Rosemary clenched the phone cord. Finally, someone answered, "Kate Watson!"

The automated attendant cut between them. "This is Bell Canada. You have a collect call from--"

"To accept the charges, please press--"

There was an emphatic beep. The attendant disappeared.

"Rosemary?!" Her mother's gasp was almost a scream. "Rosemary, is that you? Oh, thank God! Where the hell are you?"

"Mom!" Rosemary gasped. Her eyes ran with tears and she cleared her nose with a sniff. "Mom, I'm in Toronto. I've missed you so much! I couldn't call, I--"

"It's okay." Her mother's voice shook with the effort to stay calm. "It's okay, my darling one. It's okay. But where did you go?"

"We fell through a hole in Theo's floor," Rosemary sobbed. "We wandered through these tunnels and came out back in time!" She gulped. "We had no money, no food. A family took us in, but then we got in trouble. Some smugglers chased us into the sewers, and we came through this door and here we are, three months later. I've been gone so long, and Peter's in trouble and I'm scared, I've missed school and you don't believe a word I'm saying because it's just too fantastic!"

"Shh, Rosemary, it's okay. Shh." Rosemary rocked to her mother's words like a babe in arms. "It's okay, Rosemary, I believe you."

Rosemary sniffed. "You do?"

"Course I do. A mom knows these things. And it's not like this is the first weird thing that's happened to us." Then her bravado cracked. "Oh, my darling, we searched those tunnels for weeks. The police said you were swept out to the lake. Theo was beside himself--" She took a deep breath.

"Don't you go blaming yourself!" her mother snapped. "Your home, now, and that's all that matters. Get yourself to the nearest police station, right now, and call me. Theo can pick you up; I'll tell him everything. I'll call Peter's uncle too. We'll have you two back in Clarksbury before you know it--"

Rosemary's knuckles whitened on the phone. Her mother caught something in the silence, and listened. "Rosemary," she asked after a while. "Peter is with you, isn't he?"

Rosemary shook her head. "We were separated. He's still back there."

More silence. Finally, "Wait a minute, you said 'here we are', plural. Who's with you, then?"

"Faith," said Rosemary. "She's one of the two people who took us in. She was with me when the smugglers attacked."

She looked up, and saw Faith, ragged, drawing into herself at the edge of the sidewalk, flinching at the sound of a horn.

Then she was hit with visions of Peter, tied to a chair, threatened with knifes, truncheons, guns and a host of other horrible images. He called to her, silently pleading, as the darkness closed around him. Her eyes caught the glint of her promise ring and she stared at it a long time. She didn't hear her mother until she called her name twice.

"These portals," she continued, "they're temporary. We tried to go back through the same hole we fell in, but the portal wasn't there anymore, and we never heard Theo calling to us. There's a good chance this other portal could vanish at any moment. I can't leave Peter back there."

"Rosemary." Her mother's voice was tight. "There has to be some other way, the police--"

"Would call the doctors the moment you mentioned time travel," Rosemary cut in.

"How long did it take before Theo came looking for us?" Rosemary cut in. "The portal must have vanished almost the moment we went through. I don't think we have time. Mom, you know I'm right."

There was more silence on the line. Then her mother whispered, "Yes."

"There are other portals," said Rosemary. "After I rescue Peter, I'll find one..."

"I know." Rosemary's mother took a deep breath. "When you get back, go straight to Theo's new address. They closed down the apartments after the floor fell in, so he's at the Rochelle residence, 350 Bloor Street West, apartment 11C. You got that?"

"You go get Peter and bring him back safe, you hear?"

"I love you too!" Her mother's voice quivered, but she ploughed on. "We'll wait up for you, however long it takes. Come home soon."

"Goodbye, mom," Rosemary croaked. The phone clicked, but she held it for a long time, before she set it back on its cradle. She shoved her way out onto the street.

Faith turned, looking anxious, but at the sight of Rosemary, she stepped forward, opened her arms, and clasped her close. Rosemary cried unashamedly onto her shoulder, ignoring the looks of passers by.