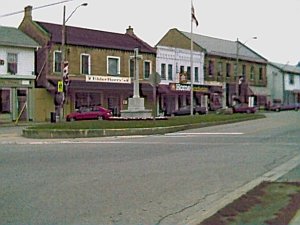 It’s good to see Dan back in the writing cycle, once again. He’s a good writer, who has contributed a number of stories to the Trenchcoat Farewell Project, knows screenwriting backwards and forwards, and comes up with plot ideas on the spot that save stories. However, for the past few months, he’s been in an odd phase where he’s written nothing, but read everything. Last year, he had over 30 substantial books on his reading list, and the voracious reading continued well into this year before he put pen to paper.

This is, of course, not a bad thing. Remember, if you want to write, read. Though Dan never put pen to paper, he certainly helped his writing career along, no end.

Anyway, today he decided to accompany us as Erin and I went on a writing journey. We returned to Ayr, where we’d discovered a promising bakery a couple of weeks before. This time, the Ayr Bakery and Deli was open (it’s closed Sunday and Monday) and we were treated to two hours of writing bliss. The shop is a working bakery and was filled with wonderful baking smells as we entered. The shop staff was courteous and didn’t object to us monopolizing a table for hours on end (although we did purchase something like $14 worth of coffee and freshly-baked cookies, so how could they object?).

The tables at the Ayr Bakery and Deli are big, with lots of room to spread out. The ambiance is soothing and quiet (although the store did a brisk business). The large windows looked out onto an interesting streetscape, but were perhaps the cafe’s only drawback. In the bright sunshine and high 20’s weather, the inside turned out to be quite warm, making writing a trifle uncomfortable. But we got by, and we all agreed that the place would be perfect on an autumn weekend. We’ll be back.

After stopping in Brantford for office supplies, we headed over to the Chapters in Ancaster for books and more writing. I was fairly impressed by what I saw. The Starbucks had lots of empty tables, some pretty large, and the ambiance was quieter than other Starbucks I’ve been in. So, on the list of good Chapters stores to write in, add Ancaster to the list.

We returned to Kitchener just as a thunderstorm broke and dumped torrents of rain on us. I’m sure my parents will be a little alarmed to read that, at one point, Freddy the car became Freddy the motorboat. Driving up Homer Watson drive in the midst of this storm, I rounded a curve and saw cars bringing up trails of spray twice as high as their roofs. I slowed down immediately, but still ended up quite deep in a very large puddle.

I kept my foot on the accelerator because I knew that if I stopped, we wouldn’t be starting again. We had very little traction and were inching forward by water power only. Fortunately, we escaped the puddle and proceeded with all due caution back home, straddling lanes as necessary to avoid large puddles (which was what every other sensible driver was doing at this stage).

Before that we were, not surprisingly, commenting on other big storms we’d seen, and perhaps we tempted fate when we talked about how we hadn’t seen a really big summer thunderstorm in a while. I don’t think I’ve ever seen that much rain collect on a road at once. Fortunately, Freddy weathered the storm and continued to drive us home. He’s now stored in the garage, drying himself off.

Like Arnold or hate Arnold, like Rex or hate Rex, this is a pretty funny column. My favourite line:

“His acting is not superb — we admit that. He has the articulation of a dustpan, and the emotional reach on camera of a very ticked-off rock. But if we insist that thespians must be masters of their craft, then the rule must be that candidates from other crafts, be it business, the law or teaching, shall also be Olympians in their fields.”

Go check out the rest.