Why the Eves Government Was Reelected 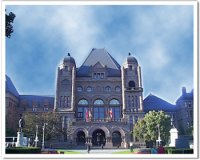 A lot of very good people are feeling cynical and depressed at the moment. I’m afraid last night has come as a bit of a shock. Maybe it shouldn’t have, after the vicious and polarizing election campaign. Maybe we should have known that the Conservatives had some magic left in them after McGuinty’s inability to land a knock-out blow in the debates, but back in the summer — heck, back in the summer of 2002 — many of us knew that the days of the Eves government were numbered. After all, how could Ontarians possibly reelect a government that has shown itself to be completely mean-spirited, and incompetent to boot? How could we reelect the government of Walkerton, the government of urban sprawl, of automobile-dependency, of underfunded education, of rising electricity rates and ham-handed, seat-of-the-pants solutions? Of scandal, and just a whiff of corruption?

I knew that this election was far from a sure thing. Though the Eves government doesn’t know how to run this province, and seems intent on running it into the ground, they do know how to campaign. More importantly, they know how to play voters off of each other. In turbulant election waters, all ships flounder, and the Conservatives had as much opportunity to cross the finish line first as the Liberals — moreso, because the Liberals were so cocksure of themselves, they slept like a hare, unaware that they were racing not only an NDP tortoise, but also a fox.

The province of Ontario has been polarizing since the early 1990s, since the Free Trade destroyed the working class neighbourhoods of Toronto, turning them into areas of poverty, and creating a sharp divide between the impoverished city, and its affluent neighbours. The Conservatives knew that the rural voters of southwestern and eastern Ontario would keep them in the game. They knew that the city of Toronto and the North would go solidly Liberal (with a few NDP enclaves) and they wrote them off. This left the 905 region of the province, the affluent suburbs surrounding Toronto, up for grabs. If it swung hard one way or the other, the party it swung to would be sitting in the government seats at Queen’s Park.

Back in 2000, there were signs that the 905 region, which voted solidly Tory in 1995 and 1999, could go Liberal. The region was angry over the forced amalgamation of municipalities and there was a growing sense of unease over the province’s deteriorating education and health care systems. More importantly, they were beginning to question the merits of the Tory policy of fiscally screwing Toronto, the engine of their economy. This wasn’t the hate-hate relationship of Detroit and its suburbs we were looking at here; York Region wanted to develop its own rapid transit network, after all, and they could hardly connect with Toronto’s subway network if the province wasn’t expanding it. Sure they liked the short-term benefits of tax cuts, but the long term impacts were starting to come clear to them.

The by-election of Vaughan-King-Aurora was the big red danger light on the Conservatives’ dashboard. They lost a seat they’d won handily in the previous election, in a vote they had unwisely turned into a mini-referendum on the Harris legacy. They knew they had to work to regain the 905 vote. They considered moving to the centre, but that field was already occupied by the Liberals, and the move didn’t sit well with their neo-conservative brain trust, so they moved the other way, proposing tax cuts (despite their proven ineffectiveness), and went even further, pursuing policies that explicitly benefitted the 905 voter at the expense of the rest of the province (the mortgage interest tax break, for instance, which will cost other Ontarians, especially Torontonians, hundreds of millions of dollars to implement). They kicked the teachers around again, and they slandared government employees and city councillors. They played off the mediocrity of Dalton McGuinty’s media image, and Eves dodged and ducked in the debate. Eventually, enough people in the 905 region responded, and you just saw the results.

Opponents of the Eves government now face a difficult and discouraging four years, living with the realization that their anger, as strong as it was, wasn’t enough to topple this incompetent and mean-spirited government. Beneath that realization is the growing unease that it’s not the government that’s the enemy, it’s the public itself.

Like it or not, a large group of people refused to believe, or failed to understand the long term consequences of underfunding education, of downloading services onto the cities and giving them no power to pay for them. A large group of people refuses to believe, or fails to understand the consequences of making rapid highway development and inadequate public transit investment provincial policy. And these people are us, our neighbours, and our friends. Democracy has functioned as it has been designed to do, and we are obliged to live with the result, no matter how much we hate it.

We have good, intelligent and defensible reasons to advocate increased government funding of education and healthcare. We can argue intelligently and eloquently on why current highway projects should be scaled back and subway construction started immediately. We can argue that taxes are too low, not too high, and that the province can prosper with a larger government fostering our quality of life. Waving placards and smashing bank windows will not do this; it will, in fact, turn the people against us, and sabotage our own goals. It’s easy to believe that the people who don’t listen to us are beholden to corporate interests and should thus be ignored, but for the majority of the populace, they don’t listen because we are too impatient to keep repeating ourselves persuasively to them.

The Liberals were visionless in this election. Their plans weren’t bold and strong, and they weren’t effectively communicated. They expected to coast into office on lingering resentment over Eves’ failed policies and sloppy management, and they allowed themselves to be robbed of victory a third time. They, like OCAP, and everybody who “just expected” the Eves government to fall, had as their goal only victory and not what it should have been: educating and changing the mind of the electorate.

Fault lines are forming in this province. We are breaking up into clearly defined groups with diverging agendas. Solving this isn’t going to come easily or soon, but the only way to solve it is to build bridges over these divides, engage the diverging groups, and talk them back together again. We will be derided and heckled, but some will take the time to argue with us, and some will take the time to listen. And if they listen, we can change their minds, and get back the cohesive, cooperative province that existed before the Harris/Eves Tories took power.

Enough moping. Let’s get to work.