The Myth of the Liberal Surplus 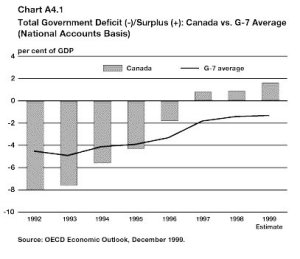 See also: The Myth of the Liberal Deficit

In 1992, Canada was suffering through the worst economic recession since the 1930s. The United States wasn't doing much better. Unemployment was extremely high, and the government was still pursuing a high interest rate policy designed to cut inflation. Of the G7 nations, only Japan had a booming economy and a surplus. For business, Japan's model was the goal that all other nations aspired to: massive mass production and automation, complete worker loyalty, and everybody work, work, work.

On PBS, an economist went on camera and predicted that this situation would be reversed in five years time. At a time when Canada and America's deficit was at its highest ever, he predicted that both nations would be in surplus, by the end of the decade, and that Japan's economy would have basically collapsed.

I must have remembered this because the economist spoke so persuasively, and his prediction was so counter-intuitive. The deficits just didn't look like they could possibly end; what could he possibly see in the economy that he could predict such a thing?

I wish I can only remember his name. Whatever the case, I remembered what he told me when, in 1997, his prediction came true.

I've facetiously defined economics as "a study of complex human relationships using statistical tools wholly unsuited for that purpose", but this economist had made a prediction -- and got it dead right. In hindsight, we can see why, but hindsight is how most economists operate, these days. This man deserves a nobel prize; he saw that, hidden behind the bad news, the other half of North America's economic transformation was occurring, changing our economy from an industrial based to an information based one.

In the 1970s and the 1980s, the high-paying, mass production industrial jobs that were the mainstay of the North American economy vanished due to competition from the industrializing Latin American and other developing world nations. Japan was leading this charge, and was about ten-to-twenty years ahead of the pack. With its top-notch technology and its highly dedicated workforce, Japanese industries were able to operate with such efficiency that they undercut their American competition. Throughout the 1980s, they reaped the economic benefits of this victory.

But Japan's victory was based upon mimicking the American economy of the 1950s and the 1960s, and doing it better. But as they revelled in their newfound riches, Japan's own economy became vulnerable to the same forces that devastated the American economy throughout the 1970s. The industrializing nations behind it were able to offer the same technology with even lower regulatory and labour costs, and the bloom was off the Japanese rose.

By 1993, the Japanese government was in deficit. To try and maintain the economy, the nation embarked on ludicrously low interest rates. By 1997, the economy was in shambles, and not just in Japan, but in the other "Asian Tigers" nations of Korea, Hong Kong, Singapore and Taiwan which had followed in Japan's footsteps. North Americans knew this as "the Asian crisis"

On the other hand, a new economy was developing in North America and western Europe. Companies such as Intel, Microsoft, Apple and IBM were at the cusp of the Information Economy, a new industrial revolution where the product was not hard goods but ideas. Workers in this economy didn't have to operate heavy machinery, they had to know how to operate complex code. They were highly educated, and hard to come by. To attract such workers, the information companies had to offer high wages. They had to favour countries with a high quality of life and highly educated workforces. Such nations reaped the benefits of such investments with booming economies and shriking deficits. The only way the developing nations could compete in this arena was if they matched westerners in their level of education and in their quality of life.

Some underdeveloped nations did just that. Ireland, which offered free university education to anybody who could pass the entrance exams, saw its GDP pass that of the United Kingdom in 1997. This growth did not come at the expense of anybody; the information economy was growing to such a degree, there was plenty of investment to spread around. It also favoured nations which invested time and taxes in improving its infrastructure, rather than nations which slashed and burned regulations and programs to try and achieve the lowest taxes possible.

As the information economy replaced the industrial one before it, nations which had been in deficit saw those deficits shrink. Much to everybody's surprise, Canada entered its first surplus in decades in 1998. The United States followed suit shortly thereafter.

Paul Martin was Canada's finance minister from 1993 to 2002. He saw Canada post spectacular surpluses before he resigned. He is every businessperson's darling for fiscal prudence, but he really didn't do all that much. Most of the spending cuts and tax changes which can be credited for the change of our fiscal position took place under the Conservative government. The Conservatives can also be credited (if such a word can be applied) for accelerating the economic changes that turned Canada from an industrial economy to an information based one.

By signing the Free Trade Agreement and by launching NAFTA, the Conservatives subjected our aging industries to competition from the American south and Mexico, and bankruptcies bloomed. The ring of impoverished neighbourhoods that now surrounds Toronto's downtown used to be strong working class industrial neighbourhoods killed by Free Trade. A lot of pain can be laid at the Conservatives' door, but it can be argued that a lot of these losses would have occurred anyway, if perhaps over a longer period of time. On the other hand, Canada's information economy would have had less access to the international market and this sector wouldn't have been so prosperous through the 1990s.

Thus Paul Martin can only receive limited credit for Canada's surplus. As finance minister, he happened to be in the right place at the right time, and he was sensible enough not to go on a spender bender when the fiscal balance turned around so suddenly.

This all suggests that governments are powerless in the face of huge macro-economic changes, but again, this isn't wholly accurate. Without the government deficits of the 1970s, every household in the United States and Canada would have had to cope with economic pressures comparable to the Great Depression. And those governments which maintained services, especially a strong education system and other programs to maintain the nation's quality of life, found themselves well placed to prosper when the information economy took off in the 1990s. Governments that promoted some restraint and sensibility in business practises suffered fewer bankruptcies and disruptions when the Dot.com boom went bust, while others saw billion dollar accounting fiascoes like Nortel and Enron.

It shows that governments sail through rough waters guiding very cumbersome ships. But while they are rarely able to make effective short-term decisions when major economic storms hit, they can still steadily steer their countries towards calmer waters with prudent plans, rational investments and a willingness to be patient. Over the long term, governments that invest in education and in the quality of life of their citizens, even if they maintain a high tax burden, will be richer and more prosperous than those that don't.

The future promises to be interesting, as the information economy really takes hold. Hopefully, it will be a comfortable future, and perhaps we'll have paid our total debt down by the time the next major economic storm hits.