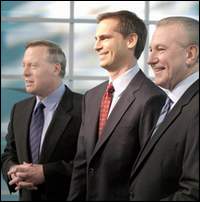 I watched the Ontario leaders debate with Erin and Dan this evening. For Dan, elections are curriculum gold as he teaches civics, and he has the power as a teacher to force his students to pay attention whenever an election rolls around. It's good for his students, and it gives him something fresh and new to teach.

It was an interesting debate, and following it, I'm confident enough to make a prediction about the outcome of this election. Barring major accidents or flubs along the campaign trail, the Liberals will win a substantial majority. The seat count will, in fact, be: LIB 70, PC 24, NDP 9. A move of just four or five percentage points can swing whole regions one way or another, and I'm thinking that the 905 region is about due to go Liberal red.

Back in 1999, the incumbent Mike Harris and a very green Dalton McGuinty entered an election almost neck and neck. As the campaign progressed, Harris pulled ahead, and McGuinty needed to score a knockout blow during the debate in order to get back into the race. It didn't happen. The real winner of the debate was Howard Hampton, who took McGuinty apart both rhetorically and intellectually, while Harris stood by and appeared statesmanlike. Hampton talked over McGuinty time and time again, and McGuinty shut up and let him. Hampton did not benefit from his strong performance in terms of seats, but the attacks made McGuinty look weak and ineffectual, and not a good enough reason to turn away from Mike Harris' Common Sense Revolution. I knew then that the Liberals' campaign was dead.

Four years later, McGuinty has been extensively coached on his style and has gained valuable experience both in the legislature and on the campaign trail. Eves doesn't have Harris' charisma, and his previous year in office has not been kind to him. The Liberals' lead going into this debate could be as high as 18 points. This time, it's Eves that needs to strike the knockout blow, and again it doesn't come.

The debate was a tie between Hampton and McGuinty. Both hacked away at Eves record and took advantage of his stilted speaking style. But when Hampton went after McGuinty, McGuinty kept talking. He continued to defend himself and get his counterpoints out as Hampton spoke, making Hampton look a little shrill in the process.

The closest the debate came to a knockout blow was near the end, when Eves tried to pillory McGuinty as being insensitive to the taxation needs of "vulnerable" seniors. McGuinty deflected the question by going on about Eves' corporate tax cuts and his attempts to play certain sectors of society against each other. Then he stepped back and let Howard Hampton launch into a lengthy and effective tirade against the Harris/Eves legacy that mentioned higher municipal taxes, downloading, higher user fees, higher power costs, everything that's been going wrong for the past eight years. McGuinty only spoke up when Hampton tried to turn that attack over onto him.

The result was that McGuinty deflected the brunt of Eves' attack, but did not actually answer the question of whether or not he was in favour of raising taxes. Then he let Hampton describe the "benefits" that Harris and Eves' tax cuts have given us over the past eight years. McGuinty benefited from the serious hit that Eves took thanks to Hampton, while not coming out as a tax and spend politician. This was an exact opposite of what happened in the 1999 debate, and you couldn't have gotten a better attack against Eves without coordination (intriguingly, some insinuated that Hampton and Harris coordinated during the 1999 debate that brought down McGuinty).

There were some flubs on all fronts. All of the leaders appeared a little shaky at the start, and McGuinty got in this interesting one-liner on Eves: "Mr. Eves, with all due respect, this is not 1995, it's 2005." (er, actually, Mr. McGuinty, it's 2003. But thanks for the sound bite!)

Howard Hampton missed an excellent opportunity when going on about the flaws in Eves and McGuinty's books and asking them just what government asset they'd sell off next. After laying into Eves several times about privatized hydro and privatized highways, he should have named one of those highways and gotten voters' attention. Everybody knows about and hates the high tolls of the 407 and he's asking a speculative question; there's no risk and much opportunity for points if he asked Eves, point blank, whether toll booths might move down to the 401. Unfortunately, that didn't happen.

Eves himself made no major flubs, other than to sound nasal and a little petulant, but he missed many more opportunities. At this point in the campaign, sitting at least a dozen points behind the high-flying Liberals, a single lost opportunity means a lost election.

Geez, I knew that news travelled fast, but not this fast. The spin on the election debate has already hit the web, with the Liberals already claiming victory on their website. This news hasn't hit the PC website yet, but they assure us that McGuinty will raise our taxes.

Hey, Howard Hampton and the NDP have claimed victory as well. About the only party that doesn't seem intent on claiming victory is, perhaps, the Greens, who weren't there at all thanks to the CRTC's decision.

And one non-debate thought: Transportation minister Frank Klees showed off the true colours of himself and his party, not to mention his complete lack of understanding of the importance of public transportation, when he was interviewed by Adam Vaughan of City TV. During the interview, he went on and on about the various road initiatives the Conservatives had pursued during their time in office (never mind the fact that the alternative of public transit has been downloaded and denigrated). Adam Vaughan raises the question "then why is traffic getting worse as your government spends ever more on roads?"

To which Klees replied: "because previous governments didn't have the foresight to build the needed transportation infrastructure like the Spadina Expressway."

To which some members of the Toronto discussion board I frequent replied "DIE TORIES! DIE!!!"

Let's be clear: the Spadina Expressway was the worst planning decision that Toronto could have possibly made. Ever. Period. End of sentence. Its defeat at the hands of overwhelming public pressure was one of the key decisions that has kept Toronto the livable city it is. And any reasonable planner will tell you that simply adding more roads to a congested situation isn't an effective response to the problem. Bill Davis knew that. It was his (Conservative) government that killed the Spadina Expressway in the first place!

It is yet another sign that the Tory party I supported and grew up with, doesn't exist anymore. It's betrayed me and its own tradition for a mean-spirited vision of conservativism. The sooner they are relegated to the opposition benches, the better.

I think Dalton McGuinty had an excellent answer when the subject of the debate moved to same-sex marriages. I think he reasonably deflected accusations that he coordinated with the Prime Minister to get this supposedly sticky subject out of the House of Commons for the duration of the election, and then he said what I've been wanting to say for a long while: as a straight man married to a lovely woman, I do not feel that the sanctity of my marriage is threatened in any way by any move by the federal government to recognize the union of two same-sex partners and call it marriage. That's what McGuinty said, and I think more straight couples need to say this in order to set the record straight, that same sex marriages are not a threat to the fabric of our society.