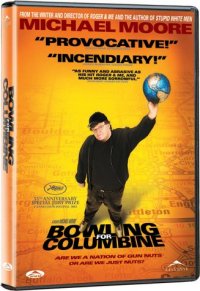 A couple of weeks ago, I saw Michael Moore's Bowling for Columbine. I've been a fan of Moore's work since Roger and Me and I was quite interested in seeing his latest movie. Unfortunately time never materialized, and I was never in the right mood, until Dan bit the bullet for us and rented the DVD for our viewing.

Bowling for Columbine is a work of anger -- deep and visceral anger over the direction the United States has taken both in recent years and throughout its history. It's a movie designed to confront and be controversial. And, given the resulting furor, Michael Moore appears to have gotten what he wanted.

Bowling for Columbine is less a documentary than it is Cinema Varite -- a powerful work of art whose artistry is so important it sometimes steamrolls over facts or twists the truth in order to provide a more powerful picture. Given how damning Moore makes the movie look, it's no surprise that the groups he criticizes have pounced on every flaw. Consider the careful editing of Charlton Heston's speech to the Denver convention of the National Rifle Association days after the Columbine shooting. More than contrasting Heston's words with the words of a grieving father mourning the death of his son, it distills everything in Heston's speech that could seem callous. In terms of artistry, it works; Moore is crafting villains and heroes, but when you're dealing with real people, they're likely to object to being made into villains.

Then there is his romanticization of Canada, which is sweet, but too one-sided to be wholly truthful (a fact that Moore acknowledged to Macleans magazine when he stated that he was crafting his picture of Canada to act as a straight man to his picture of America). It's true that Canadians have as many guns per capita as Americans, but we don't have the same type of guns. As I said in an earlier post, Canadian guns are designed to make venison, while American guns are designed to make venison puree. Then there is the suggestion that no Canadian locks their doors, while Americans bolt theirs. As a Torontonian, I lock my doors all the time, and was laughed at for showing up to my in-law grandparents door in the middle of a South Dakota blizzard, ringing the doorbell, and waiting.

Michael Moore hasn't been sued yet, because he's smart enough to make Bowling for Columbine solid enough to withstand court tests, but the voraciousness of his demogoguery pushes me away from the movie, which is a shame. For all the small points which distracts from the central message, that message is sound: despite owning as many guns per capita as the United States, Canada has a tenth of the murder rate. We listen to the same music and we watch the same television shows; if the presence of guns aren't killing us, if the heavy metal and the violence aren't causing us to kill ourselves, then what is so different?

Michael Moore's answer is simple and brilliant. The heart of Bowling for Columbine is a cartoon which condenses American history into two minutes (simplistically, but effectively nonetheless) and makes it all about fear. From the fear of the Puritans fleeing persecution, to the fear of the slaveowners fearing the rising population of blacks in the south, to the fear of the world's only remaining superpower, which with the rest of the west holds 80% of the wealth, but only 20% of the world's population, Moore makes a convincing argument that the problems facing America are not about bad people, bad music or poverty, but about fear.

Some of the fear appears to be justified. Canada has little to fear from a terrorist attack, while the prominent United States is squarely in evil people's sights. But in some American cities some Americans are less willing to trust, either their neighbours, people who look different, or the interests of foreign governments. The U.S. government has the tendency to pull out of international agreements, and operates with a sense that rest of the world would take advantage of America if given half the chance, and America can do well without it.

Like anger, fear is a strong emotion that motivates us in the short term to make the world better. Fear applied as a low level buzz over the long term, however, corrupts society and kills trust, especially a society that believes more strongly in individual liberties than societal obligations. In a society where people have a stronger sense of their place within a community, there is an obligation to show trust. Trust builds trust, and there is less of a sense that the disshevelled stranger you run into on the street will attack you. In a society that sees individuals as marbles in a bucket, there is a temptation to see all other marbles as potential competitors, and the disshevelled stranger as a dangerous loser.

Michael Moore muddies this message with his editorial tricks, but it still comes out powerfully. America has its problems partly because it is divided and afraid, and fear and division are reinforcing themselves, sometimes overtly. If America wants a better future, Americans have to be more willing to trust themselves, not only their neighbours, but dishevelled strangers.

Which brings me to the Ontario election.

I've long been wondering what it was about Ernie Eves campaign that set my teeth on edge, moreso than the Harris campaigns of 1995 and 1999. Bowling for Columbine set things in perspective. Whereas Dalton McGuinty tries to stand above the mudslinging fray and speak to what all 12 million Ontarians can build together, Eves is trying to break Ontarians apart.

In 1995, Mike Harris campaigned on anger -- a strong, visceral emotion like fear, but which sought to change things for the better. Though I feel that Bob Rae gave us the best government that was possible from 1990-1995, there was no doubt that the province was a mess, and people had a right to be angry. In 1999, Harris campaigned on what he had accomplished. He hadn't built a great society (he didn't believe in that), but he had trimmed the government from the lives of individuals, and theoretically gave them more room to express themselves. In both cases, he encouraged the people of Ontario to vote for something apparently positive.

But for Eves, it has been eight years since Harris was elected, and the massive tax cuts haven't produced a society that's appreciably better than before. So, to gain reelection he has tried tax cuts targeted to specific sectors of society more likely to vote Tory. Tax breaks on mortgage interest benefits home-owners more than tenants, suburban residents more than Torontonians, but given that Torontonians and tenants were already unlikely to vote for Eves, there is no political cost to kicking these groups in the shin. That's division. In terms of fear, Eves has promised to ban teacher strikes even though 99.9% of all contract disputes between teachers and education boards are solved before job action takes place. He has created a crisis where none exists, evoking our fears about our children's future to demonize teachers' unions and scare the public into voting against them. He has campaigned heavily on immigration -- a federal responsibility -- raising fears over illegal immigration far out of proportion to the threat actually posed to society, going as far as to hint that Canada is coddling Nazi war criminals to the riding of Thornhill and its significant Jewish community. One of his election ads runs over the crises of 2003, from SARS, to Mad Cow to the Power Blackout, accompanied with ominous music and the suggestion that only Eves can lead us through the demons surrounding us.

Leadership in a time of crisis is one thing, but leadership towards a better future is another, and Eves has yet to speak to that. In short, Eves campaign mirrors the techniques applied by a number of American campaigns, where politicians run less on their own platforms, than against the "disastrous" policies of the others. There is no hope given for a better future, there is no trust given to other strangers. Instead, we are being led down a long, dark tunnel full of demons, seeking to avoid those demons that are worse than most. The success of McGuinty's current campaign suggest that Ontarians wish to seek out angels, rather than hide from demons.

I trust my neighbour. I trust the people walking down the street. I trust the people of Ontario. I trust that they trust me and, on October 2nd, they will not vote out of fear but out of hope. And whatever the flaws of Dalton McGuinty and his potential administration, I trust we will look forward to a brighter future.

Moore puts me in my place. After my own post correlating crime and terrorism to poverty and the gap between rich and poor, Moore took a swipe at liberals for doing the same thing. But the two elements are linked, in my opinion. A large gap between rich and poor is similar to a fence that surrounds a gated community. The fear that causes the rich to create the fence reinforces to the poor that they're not supposed to go there; that society has shut them out. A society that fears parts of itself is hardly a society at all.

Further Reading on Bowling For Columbine