No Remnants This Time. 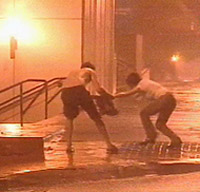 Despite predictions all round that Hurricane Juan would weaken over the cooler waters south of Nova Scotia, the opposite happened, and as a result a Category 1 hurricane made landfall over Halifax. Two deaths have already been blamed for the storm, which had sustained winds of over 140 km/h. Over 300,000 people are without power and there has been property damage in Nova Scotia and Prince Edward Island.

An election is scheduled today in PEI. I can't think that they'll be holding it; if they do, I expect a pretty low turnout.

While not a major disaster compared to Isabel's impact on the Carolinas, Juan is still the first hurricane to hit the region since 1995's Hurricane Hortense. I think it's the first in a while to score a direct hit on Halifax. The mess will take a little time to clean up.

This caught me completely by surprise. There was little about it in the news until the storm hit; unlike Hurricane Isabel, which Central Canada stared down as though it were a loaded gun. We heard the reports of Juan on Saturday, but I didn't think much about it on Sunday, and the news is playing catch-up. I'm feeling a little guilty about that. I'll be watching things as they unfold.

I stand corrected. Reports indicate that PEI's election is going ahead as scheduled.