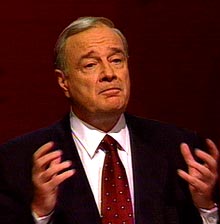 So, Paul Martin is now the new leader of the federal Liberal party. He will probably be prime minister by mid-December. A friend of my father's, a lifelong Liberal, is despondent about the prospect of PM as PM; "He'll be worse than Mulroney", he says. Some other Liberals, despite the party's propensity for pulling together, are similarly concerned.

It's hard to peg where Martin stands on things because, right now, a lot of people see him in a lot of different ways. The Canadian Alliance is sure that, despite some conservative tendencies, he'll follow his tax-and-spend father's footsteps. The NDP are sure that, following his spending cuts and surpluses garnered as finance minister, and dismantle more of the social safety-net that his father helped found and increase Canada's dependence upon the United States. Thanks to the fact that Canada dramatically improved its fiscal position throughout his tenure as finance minister, there are more than a few people who see him as a political saviour and are heading for a massive reality check. Martin himself is very coy about who he is and what he stands for as he knows the perils of being a clear front runner, and has spent the past few years appearing prime ministerial and being very careful not to offend anybody.

There is no doubt that he and Jean Chretien have had a strained relationship and disagree on aspects of Liberal policy, and Martin's ascendency does represent a change on what has gone before. It may be pointless to speculate what a Paul Martin administration will look like since, over the next few years, we're going to find out; but being pointless has never stopped me from doing anything. Here are my thoughts:

I think it's likely that Paul Martin will prove himself to be more right wing than Jean Chretien. Will he be worse than Mulroney? Probably not. But Canada has, in many ways, been granted a brand new conservative government without a federal election. He will make the Progressive Conservatives and the Canadian Alliance even more irrelevant because he will happily appropriate their more moderate policies. The NDP and the left-of-centre Bloc-Quebecois are now the (unofficial) official opposition.

And, despite all, Canadians won't mind too much. Being finance minister isn't as hard as being prime minister, but being finance minister at a time when huge deficits have to be coped with is a close second. Martin is already well versed in making the appearance of good government without actually doing much work. He won't cut taxes as much as the Canadian Alliance will want, and the NDP will bemoan the lack of any major social commitment, but he'll cut taxes and raise spending in ways that Canadians will notice, getting the most political capital for the buck. The only question is, will this be enough to meet Canadians' inflated expectations?

If Martin proves to be substantially more right-wing than Jean Chretien, I don't think our lives will change, much. He may kow-tow more to the United States, but that won't affect my personal identity as a Canadian. He may spend more money on the military, but that has to be done, frankly. He won't substantially cut health care, because he knows that is political suicide. Martin's government will not be substantially different from Chretien's on these issues.

But there is one thing that will make or break Martin's time as prime minister. Over the past few years, he has made one pretty clear promise that will, if he carries it out, substantially improve the prospects of Canada's future. He has spoken often on the need for a new deal for Canadian cities.

There are people out there looking forward to the 3M alignment (Miller for Mayor, McGuinty for Premier, and Martin for Prime Minister) because of this talk of a new deal. Over the past decade, our cities have faced twenty-first century problems with political and taxation powers rooted in the nineteenth century. As Canada's population becomes even more highly urbanized, our cities will be the key to our future. Our cities need the power and the funds to maintain services and handle growth. They will need to be given sources of income other than regressive property taxes. Success or failure to do so affects us as deeply as success or failure to maintain our national health care system.

McGuinty has reaffirmed his promise to grant the municipalities a portion of the provincial gas tax for public transit funding. If Martin follows suit, cities like Toronto will be better able to control sprawl and urban decay, and our cities of 2040 will be vibrant, less polluted places to live. As political legacies go, that's big.

Canada has changed during Jean Chretien's tenure, primarily for the better, but the big change remains unaddressed and ongoing. Canada may be unrecognizable in twenty years thanks to the population shifts which are taking place; every major city in this country is at a crossroads, facing a choice between controlling their growth, or sprawling into an unsustainable morass. Where these cities go is up to Martin, now, and thankfully he has shown some understanding about this issue and the importance of choosing well.

If he does nothing else but choose well, his legacy will be as large as Chretien's. If not, it will be worse than Mulroney's.