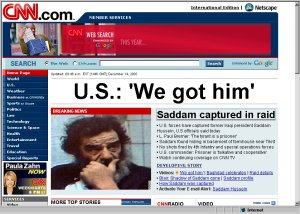 My father's phone call woke me up around 7:45. His first words were, "did you see the news?" The last time he did that, the Columbia space shuttle had blown up. Before that, Gorbachev had been taken prisoner during an attempted coup. Good news always sleeps till noon, as the saying goes. So, I'm fully expecting to hear that something world-shaking had blown up.

Fortunately, I was wrong. The capture of Saddam Hussein is good news, and big enough news to wake someone out of sleep, I suppose. It does beg the question of what the U.S. intends to do with him. He's too important a prisoner just to shuffle off to Guantanamo Bay and forget about. Does the United States really intend, as some commentators suggest, to send Hussein to the International Court (that sends my irony meter into overload)? Is the United States interested in trying him on American soil? Is the Iraqi governing council stable enough to try him on their own? His trial, if he gets one, should be interesting viewing indeed.

The level of news coverage on this bothers me, however. The relief of the administration is palpable. It is the first piece of major good news to come out of Iraq in a while, and I guess the temptation exists to bathe in it (I'm sure that some doomsayers like myself will be offered up platefuls of crow). However, if they think that all of Iraq's problems can be solved by the capture of one man, I fear that they will soon be sorely disappointed. The capture of a former dictator is a powerful symbol, but it doesn't get the gas and electricity flowing.

Bonus points for those politicians who are trying to use this event as the start of a call for reconciliation. It's worth a try. However, given the condition that Saddam was found, given that he spent six months "scurrying from house to house", one wonders just how much influence he actually had in the resistence. Is it possible that the US captured only a symbol, and nothing more? In Capture the Flag, once you get the flag, you still have to get across the mid-field line, and there are still a lot of people waiting to tackle you.

Update 11:20 am: Once again, Chris Allbritton says what I'm trying to say, but in a much, much better way.

If the Weight Don't Get You, the Sticker Shock Will

From D-Generation.ca comes this link to the Greatest Book of All Time, with the biggest price of all time.