Our Next Cities I - The Arrogance of Planners

Urban planners have God complexes, I know this from experience.

Graduating from the University of Waterloo, I thought I knew everything, and I was about to help save the world. And, why not? After all, urban planning was responsible for urban form, and urban form affected us all. Change it for the better, and you’ve saved the world.

Long years of bitter employment away from my chosen profession removed all illusions of such grandeur, but I’ve come to realize that it wasn’t just youthful post-graduate idealism speaking here; instead, it’s the way that some planners operate. And it’s true too — planners change the world. We are just far less in control of that change than we’d like to admit. 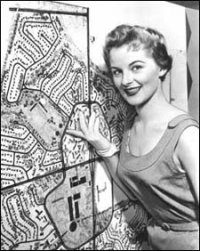 In my opinion, an era wherein we saw the height of planner arrogance was the 1950s and the 1960s. This was, not coincidentally, the era of the great urban renewal project. Throughout the thirties and the forties, society as a whole was looking to the future and expecting flying cars and atomic kitchens, unlimited mobility and an end to poverty. After the end of the Second World War, urban growth, hindered by twenty-years of depression and war rationing, blossomed. Planners, along with architects and engineers, suddenly found themselves in high demand, with a lot of power and a blank canvas on which to design. The time had come to shake off the dated forms of yesteryear and to build a brave new world. And build it they did.

Some of their experiments were intriguing in their results and worthy of preservation, but soon the revolutionary zeal unveiled a dark side: our aging urban centres were not benefitting from the rise of the modern suburbs. The combination of the flight of the affluent to the suburbs, the fact that the downtowns weren’t built to suburban (car) standards, the fact that the urban infrastructure was old and starting to wear ended up creating areas of serious urban decay. Our cities were losing their centres. The planners of the day, flush with their successes on the fringes, turned their attention to the inner neighbourhoods, hoping to remake the downtowns of our cities into their suburban vision.

The problem is, unlike the ploughed fields on which the suburbs were growing, there were more people living in the cores the planners hoped to redeveloped. There was also more history to knock down. The zeal of progress held such landmarks in contempt, and buildings that we would now hold to be treasures were demolished without so much as a by-your-leave.

“If [a developer] went out to buy land on the market, he’d have to buy the land, the building that sits on the land; he’d have to buy the business the man has … he has to buy what the business is worth, and, if there is a tenant in the building that has, say, a ten year lease, the developer has to buy him out — which amounts to a tremendous amount of money. Now this is one of the reasons why there is urban renewal: so the federal, provincial and municipal governments can go out and buy buildings and leases and businesses and rip ‘em all down and then put a value only on the land — which is a lot less than all the other stuff — put that on the market, and sell it to a develper. The developer will come in under those conditions.”

The modernist development started revealing its flaws just as the urban renewal craze really hit the centre cities of North America. Some people began to realize just how much baby was being thrown out with the bathwater. As opposition to the inexorable march of progress materialized, it merged with the grassroots anti-establishment movements started to rise in the 1960s. Some planners didn’t know how to respond to it.

In the 1960s, Kitchener lost its city hall. The building was, by all accounts, an architectural jewel: a beautiful neo-classical building with a large public square and a farmers market behind it. It was unquestionably the centrepiece of the city, a gathering point for its citizens. It was also old, had no elevators, and sitting in an area of the downtown core which (some planners thought) needed urban renewal.

Planners knew what to do: sell the property to a mall developer (Oxlea Investments), have the building knocked down, and relocate city hall to a faceless office building across the street (well, the planners of the time probably would have replaced “faceless” with “modern”). That’s progress; people can’t be opposed to progress, can they?

As it turns out, they were. Bill Thomson, Director of Planning for the City of Kitchener was a principle negotiator for the deal. Kitchener City Council was given the renewal deal over two meetings in less than two months. The decision was never reported in the media until the University of Waterloo’s student newspaper, the Chevron ran an exclusive the Friday before the June 28th meeting when the final approval was to be given. Area residents objected to the loss of a cultural landmark. Controversy built from council decision to OMB appeal until it forced a referendum on the deal.

Bill Thompson defended his vision of the city with the same revolutionary zeal of other planners of the day. He was, frankly, offended that average citizens could take issue with the city’s plans; how dare they object to what was so clearly good for them. His response to some was less than tactful. An old neighbour of mine, an opponent to the city hall demolition, still has a letter from Mr. Thompson, where he accuses her of being manipulated by “communists and hippies”. A direct quote of Mr. Thompson can be found in the article Waterloo’s Bill Thomson: Planning for Power by Kent Gerecke (to be found in The City Book: The planning and politics of Canada’s cities, published by James Lorimer & Company, Publishers, Toronto, 1976):

In the end, the planner must place the alternatives of the future, the locations, the involvement of the public and private sector and the types of industries before the region. Right at the end he is charged with the responsibility of recommending one of the various choices for action. If all the work has been done correctly, then the proper choice between job opportunities versus good farmland will be made; the right alternatives for use and standards will be articulated, the best role for the region to play in industrial development made.

I pick upon Mr. Thomson only because it’s convenient (I happen to own a planning book containing a lengthy article that’s critical of his tenure). He was far from the only planner who thought the way he did. The 1950s and the 1960s were the era of the urban megaproject. The south side of Chicago was completely demolished in favour of slab apartment blocks full of subsidized housing. The 19th century working-class neighbourhoods of Donvale disappeared for the high-rise blocks of St. James’ Town. The urban design of the day threw out everything that had failed (and worked) before. There was no connection with the pedestrian, only the car. The street grid was thrown out, and poorly lit, isolated walkways thrown in. Porches disappeared, and people isolated themselves.

These projects continued into the 1970s, but ran into more and more activism from grassroots urban movements. The ill-fated, ill-designed Spadina Expressway project was stopped when the entire City of Toronto stood up and said that their downtown wasn’t going to be redesigned according to suburban principles. The new St. Lawrence neighbourhood was built with the same zeal as St. James Town, but was designed with more old urban principles in mind: low-rise buildings, maintainance of the street grid, and greater connection between pedestrians and the street.

Kitchener was not so lucky. The referendum was hard-fought, with the grassroots movement facing not only city hall, but a local paper which was campaigning actively for the deal. The deal passed 57-43%, and the great neo-classical structure came down, to be replaced by the Market Square Mall. What followed was thirty years of downtown urban blight, with city hall stuck in a faceless office building, stores closing, and the two malls which were to save the downtown all but dead. It was only in the mid 1990s, when a more enlightened civic administration built a new city hall, with an urban square built along classic and post-modern planning principles, that real revitalization of Kitchener’s downtown started to take hold. The serious mistake of demolishing Kitchener’s old city hall was implicitly acknowledged when the preserved clock-tower was re-erected at the gate of Victoria Park as a monument to what had been.

Bill Thompson spoke up a few years ago decrying other innovations that have improved Kitchener’s downtown: the elimination of the one-way streets that surround the downtown, for instance, which had previously diverted traffic around downtown as fast as possible. There has been criticism of the increased spending on Grand River Transit. There are still advocates for the old way of doing things. Witness the pull Wendell Cox has in campaigning against public transportation and urban development that once again makes automobiles a luxury as opposed to a necessity. In the Modernist planners view, automobile ownership isn’t just a right, it’s an obligation.

But gradually the old ways are falling to a new generation of planners. More than New Urbanists, there is a sense in planning now that planners work for the people, and that the great drive of planning is to reach out to the communities and consult. I had at least one heavy course each year at University on the hows, whats and whys of the public consultation process. Despite recent flareups, NIMBY isn’t as bad a word as it used to be. We know the perils of car-dependency, and we’re trying to build new neighbourhoods that are pedestrian and public transit friendly. All of these are good things.

But however much planners reach out to the public, planners still tend to do so from the point of view of “we have these great ideas we think you would like; let us tell you about them!” Post-modern planners may not share the Modernists’ design ethic, but they certainly share their zeal. The people in the community may live in their houses, but we planners received a university education in our profession and we know how our neighbourhoods work. Planners are still somewhat surprised when average people stand against them and say that our ideas are not how they want their neighbourhoods to work.

Planners do have somewhat godlike influences on the average person’s daily life, but we are not gods. In some ways, we are Prometheuses, and Doctor Frankensteins, with each generation developing solutions to fight the monsters of the generation before us.

Knowing this explains how planning has developed over the decades, and may even give us a hint of what is to come.

Next Article: The Cycles of Planning