Rosemary and Time - Workshopping the Prologue 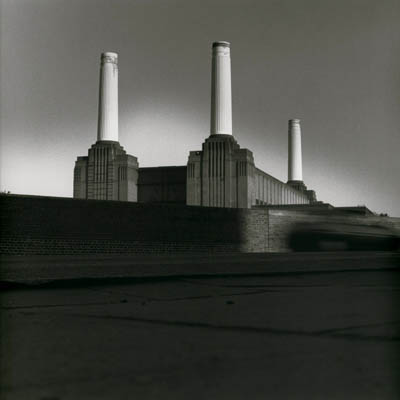 The photograph of Battersea Power Station (wonderfully done!) was by Anthony Jones, and is used with his kind permission. I heartily encourage you to visit his website and see the other photographs he has to offer. This photograph is for sale, so if you are interested, contact the photographer.

Unlike some people we know, we managed to stay up to midnight and beyond in order to bid farewell to 2003 and welcome 2004. Dan and Cameron came over for an evening of fondue, champaigne and a most interesting game supplied to us by our friends Wayne and Marguerite.

The game is called Once Upon a Time and it’s an interesting game that requires you to tell stories, based upon certain elements and a specific ending sentence that is dealt out in your cards. As the story progresses, other players can interrupt and carry on the stories. This is definitely a story that rewards quick thinkers, fast talkers and people able to improvise.

The object of the game is to use up all of your cards and finish the story believably with your ending sentence, but our games tended to become more collaborative efforts; we weren’t interested in winning or losing as much as telling as fun and wild a story as we possibly could. Cameron and Dan even caught me feeding Erin a ending card that fit the story better than her own could, but they didn’t call me on it, as it did make for a better story, even if it meant that Erin won.

Definite thumbs up for Once Upon a Time.

Cameron stayed overnight and we spent much of the next morning relaxing and workshopping. We were again reminded why these sessions are so fun and useful and must be monthly events. This time around, we workshopped the prologue of Rosemary and Time, and came up with substantial improvements. We tightened some things, removed a few passive phrases but, most importantly, tried to get a greater sense that you were being dumped in near the end of a book. The old prologue had too much description, betraying the fact that I as an author know that the prologue is a prologue. The new prologue, I think, also gives you a better picture of Marjorie, Andrew and John as characters. You can read how the prologue went before the workshopping right here. And here is what we ended up with:

“What is this place,” Marjorie gasped.

She stood, with John and Andrew, at the base of the tallest, largest building they had ever seen. Chrome jaguars guarded the steps, frozen in mid-leap. The other buildings seemed to crowd together, pushing them up the stairs. A thousand zeppelins patrolled the sky.

“Is this where the people went?” asked Marjorie.

“That’s comforting,” said Andrew. “I think we should go now.”

“Perhaps there was some disaster,” said John. “I wonder what happened here; it’s like the Marie Celeste!”

“Do you wish to see the people?” Sentinel 42, moving stiffly on stone joints, stepped past them and pushed open the doors.

“That statue is just so creepy,” said Andrew. He put his hand on Marjorie’s shoulder. “Let’s get out of here!”

“No.” Marjorie pushed her horn-rimmed glasses further up on her nose. “I want to see.”

They found themselves in a vast dark cathedral. Huge marble slabs stood suspended from the ceiling, row upon row, seven feet wide and tall and two feet thick. Some swung almost imperceptibly, as if something inside them stirred.

The rhythmic heartbeat of the city hammered off the walls, breaking their thoughts to well-ordered pieces.

“But… where are all the people?” asked Marjorie.

John stared up at the slabs. His face went white. “Marjorie…”

The doors slammed behind them.

Rosemary winced. She turned the page.

Each slab held the impression of a person: here an old man with wide staring eyes, there a young woman, a child; each as different as people are from each other.

Frightened but curious, Marjorie led the way onto a moving sidewalk towards a second set of giant doors. Sentinel 42 pressed Andrew and John to follow her. “Ours is a powerful civilization,” he said. “We have built many wonders. But civilizations grow old, and old civilizations disappear. Knowing this, the people of this planet built the great Machine. The Machine was the pinnacle of our technology, capable of answering any question put to it and performing any action asked of it. We told it our fears and we asked it to preserve us so that our civilization would never die.”

“But I don’t understand,” said Andrew. “Where are all the people?”

The second set of doors swung open as they approached, and the heartbeat intensified. At the end of a long hall sat the Machine.

Rosemary swallowed hard. She flipped ahead.

Metal claws snaked down from the ceiling and grabbed their wrists and ankles.

The Sentinel spread its arms, as if puzzled. “Why do you resist? The Machine preserves all on this planet. You are on this planet, so you must be preserved.”

“We’ve got to get out of here!” Andrew yelled.

Andrew screamed as the metal pincers wrenched him off his feet.

“Marjorie, do something!” John shouted as the claws pulled him away. There was the sound of clanging metal, the hiss of steam. Her brother’s yells ended abruptly.

“Andrew! John!” Marjorie screamed. She struggled vainly against the metal cables wrapping around her body, pulling her to the Machine. “No!”

Horrified, Rosemary threw the book across her room.

It landed with a thud, and Marjorie’s story slammed shut.

A significant improvement, I think.