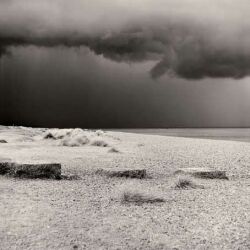 Though I've been talking politics for much of the month of January, I have spent some time working on Rosemary and Time. Erin has been workshopping the early chapters of my story, and I've been uploading the results to a literary critique group.

As you know, the great challenge of this rewrite is to take Rosemary and Time out of the treacherous boundary waters between teen fiction and middle-grade novel and place it firmly in middle-grade territory. So far, the task has gone well, as Erin has helped me tone down the language, making the dialogue sound more convincing coming from the mouths of twelve-year-olds.

But yesterday I ran into my first major hurdle. Not that it's much of a surprise, you understand; I've seen this coming for a while. But the obstacle is no less difficult.

Rosemary and Time turns on the fact that, at some point in the narrative, Peter kisses Rosemary. It sounds corny written out like this but, overall, I think it works. It's related to the Impossible Things sequence. Rosemary names Peter kissing her as one of the six impossible things that pays her fare across the Sea of Ink. After Peter kisses her later in the narrative, Rosemary is able to use this as an example of an impossible thing to give Marjorie critical hope, thus turning the climax of the story and bringing everything to a happy resolution.

Well, now that you've read that, you don't need to read the story. But please don't go away. :-)

Of course, in the scheme of things, this is the most glaring example of a teen element showing up in what is otherwise a middle-grade story. Kids aged 10 (the most common readers of middle-grade novels) are unlikely to appreciate the subtleties of kissing, are they? Are they? And while it might be in character and okay for Peter to kiss Rosemary once in this story (the almost-kiss partway to the climax was removed without too much trouble), it would make Rosemary seem much too old to want Peter to kiss her. Her sixth impossible thing amounts to a wish, and girls aged 10-12 don't wish to be kissed by a boy they barely know, do they?

But without that kiss, the climax unravels. What is the impossible thing that Rosemary wishes for that gives Marjorie key hope? And, for added difficulty, it has to be something that illustrates the change in Rosemary's character, the fact that she has come out of her shell, somewhat, and is willing to risk reaching out beyond herself for friendship.

The Sea of Ink

Thanks to Erin's workshopping, the opening to chapter four of Rosemary and Time (the Sea of Ink) has changed. I rewrote it and have (I hope) made things more atmospheric. The idea-trees concept has also been reworked, making the ideas spouted sound as though they're coming from younger people, and darkening things up a bit. Tell me what you think:

Rosemary fell or floated, she could not tell which. Her arms flailed, her hair waved into her eyes, but she felt no wind. She could only glimpse white when she could see enough to look. She had no sense of up or down.

Then she landed on her back on a surface like a soft mattress. It drove the wind from her lungs and sent up a spray of dust like fog around her. She lay in a daze and felt the little specks fall back on her.

She blinked as the memories slowly came back: folding girls, Theo, Puck, then flying through the paper portal with Peter, then free fall. Now she was here. But where was Peter?

She brushed the sand from her cheeks and sat up.

She sat in the middle of a small crater shaped like her outline. The sky was as white as a void, and the horizon between them was a thin grey line. The air was still and the temperature felt like it didn't exist. There were no birds. No sound, except for her breath.

She stood up unsteadily, adjusted her glasses, and looked around. She found Peter behind her, spread-eagled and face down in the sand. Rosemary knelt by him and shook his shoulder. "Hey, you okay?"

Peter pushed himself onto his hands and knees and spat sand from his mouth. "I think so."

She helped him to his feet. He rubbed his forehead. "Thanks."

"You're sure you're all right?"

He took a deep breath. "Yeah."

"Good." She slugged him.

He fell over in a spray of dust, then scrambled to his feet. "Hey! Why did you hit me?"

"Because you hit me!" She rubbed her own jaw.

He blinked at her, then snorted, breaking out into a grin. "Sorry."

Her mouth quirked, but she eyed him sourly. "I told you not to follow me."

He raised his hands. "What did you want me to do? Stand around while you went in alone?"

They looked around. They were in the bottom of a bowl of sand so white that, without the sight of each other, they half believed that they'd gone blind. Their footprints inked the ground like typewriter keys on paper. "Puck!" Rosemary shouted. Her voice didn't echo.

"Hi ho!" Puck called, his head popping up above the top of a white dune. "Awake, are we?"

"Where are we?" shouted Peter.

"Come up and see." And his head disappeared. They heard a rustling.

Rosemary and Peter glanced at each other and shrugged. They scrambled up the sand dune, stuttering to a stop at the top, blinded by their first sight of black.

They stared down a white, sandy beach, ending abruptly at a black sea that slapped at the shore in slow, oily waves. Puck was standing at a grove of gnarled black trees, shaking a branch laden with round white fruit the size of basketballs.

Rosemary and Peter glanced at each other again and shrugged again. They trudged to the grove, arriving just as Puck pulled one of the fruits free. "Something to play with while we wait," he said.

"Wait for what?" demanded Rosemary. "Where's my brother?"

"Across the sea." Puck turned Rosemary and Peter by the shoulders and placed his head between theirs. He pointed across the black sea to a speck of colour on the horizon. "There, my friends, look there. That is the Land of Fiction."

"There?" said Rosemary. "How are we going to get over there? You were supposed to bring us there! We're going to need a boat!"

"We shall have a boat, wise one," said Puck. "We must wait for the Ferryman."

Carrying the white fruit, Puck led the two along the beach. A jetty came into view. No boats were in sight.

Puck sighed and shook his head. "The Ferryman is never here when one needs him." He flung the white fruit on the ground.

Peter and Rosemary scrambled back, expecting it to splatter, then stared as the fruit bounced, changing colour as it hit, swirling like an oil-slick on water. The swirls shook as Puck bounced the ball again.

"What is that?" asked Peter.

"Where else would they be?" said Puck. "Tis a shame they are not more common." He bounced the ball once and twirled it to Peter and Rosemary.

Written in black text on a white stripe were the words, "What if rugs could fly?"

The words now said, "What if we could make time run backwards?"

"Ideas fall from the trees and are blown across this beach," said Puck, "and into the great black sea that surrounds the Land of Fiction. In time, they build the Land itself."

Peter reached for the ball. "Let me try!" Puck handed it to him. Peter bounced it.

"What if we could travel at the speed of thought?"

Rosemary blinked at the swirling fruit. She shivered.

"So I can do this," said Puck. He snatched up the ball and bounced it off of Peter's head.

He ducked away. "Hey! What are you doing?"

"Some ideas can be specific to the individual," said Puck. He moved to bounce the ball again.

"Give me that!" Peter grabbed the ball and bounced it off Rosemary's head.

Puck pulled the ball away. "You are indeed wise, Sage Rosemary. Your mind is full of many thoughts."

But Puck tossed the ball high into the air. It arced over the beach and landed in the sea. It bobbed on the surface for a few seconds before sinking beneath the waves. "We've had our fun," he said, waving them forward, "but now our ride has come. Move along, my children, along!"