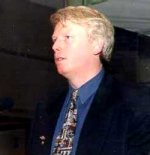 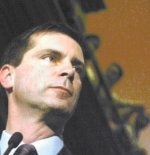 It may be winter here in Ontario, but the political heat has turned up a notch for two recently elected political leaders. Here are a couple of fairly representative comments from the local blogosphere:

For those of you who have been driving Mayor David Miller’s soon-to-be-tolled roads, this will surprise you with its suggestion that Toronto streets are now being plowed at all.

Tell me why there’s a Liberal party in Ontario, because it seems that everything Dalton McGuinty is doing is what Ernie Eves’ PCs put into place. The latest in a long list of flip-flops? Now the Liberals are ending mandatory retirement: a policy announced by the PCs in last spring’s infamous Magna budget. There’s no indication that this would not include university academics. Grrr!

This is just the last in a long line of broken promises or post-election shifts of the Ontario Grits. I have reached the end of my rope for tolerating the provincial Liberals. Next election will see me voting NDP or anything else come hell or high water, because I’ve learned you can’t trust the Liberals at all.

I am amazed by the number of people I’ve read who have turned against the McGuinty government within its first 100 days of taking office. Though I share their disappointment, I still feel that they are being (ever so slightly) unreasonably impatient. Harris destroyed a good chunk of Ontario within 100 days, and as it takes far more time to repair than destroy, it only makes sense that it will be longer, much longer, before McGuinty can make some real gains against Harris’ legacy now that he’s in power.

Dalton McGuinty and David Miller have a lot in common (I’m not sure if Mr. Kinsella would like to admit that since, in the previous two elections, Warren worked for McGuinty and against Miller). Both politicians swept in on platforms capitalizing on the general public disgust over the mean-spirited, incompetent and corrupt government of the previous administration. Both politicians started their mandates surrounded with an aura of optimism, and both face daunting shortfalls left by the previous administration (in McGuinty’s case, $5.6 billion; in Miller’s: $340 million).

One difference is that McGuinty is taking a lot more heat than Miller, both in the media and on the street, for having to adjust his perspective now that he’s been faced by this unexpectedly bad fiscal situation. Indeed, for failing to reverse development on the Oak Ridges Moraine, for loosening the Hydro Rate cap and for taking a go-slow approach on the gas tax transfer, the Liberals have started to gain some rather uncomplementary nicknames. The epithet of choice on certain boards I belong to labels Liberals ‘Fiberals’.

Warren himself went on camera to defend the McGuinty and the Liberals, noting that patience is required because the higher than expected deficit demands it. He points out that most people know that the deficit is the result of the lying and duplicious policies of the outgoing Eves administration, and McGuinty still has a well of public patience and support to draw on. And he’s right: the first opinion polls after the October 3 election show McGuinty’s Liberals still flying high at 48-50% support. Warren’s small swipe at Miller’s administration aside, Miller maintains even stronger public good will than McGuinty at the moment — at least, if you look at the media (and ignore the Toronto Sun columnists and their shed full of axes to grind). Indeed the difference is so pronounced, it begs the question, why does such an imbalance exist in the first place?

One possibility is that Miller campaigned on fewer promises than McGuinty, providing his critics with far less to nail him down on. Miller himself noted during his campaign, that the financial commitments that he himself could act on was in the millions, not the tens or hundreds of millions. He campaigned on policy and approach, not cash, and he has carried through on key elements of those policies (see the reversal of the Island Airport bridge). Indeed, despite Kinsella’s insinuation that the roads aren’t being plowed under Miller’s administration (in a winter that has had the heaviest snowfall since Mel called in the army to dig the city out), this does not square with wider public opinion.

I haven’t been all across town, but from what I can see, the roads have been looking pretty good this year. Last week I checked in with a tired-sounding Gary Welsh, Toronto’s so-called snow czar, after yet another dump of the white stuff. Asked how has this winter been going, Welsh says, “actually things have gone quite well.” It seems that city staff spent a lot of time planning their snow response, re-jigging routes so that more kilometers of pavement become clean faster.

I think it’s also possible that Miller has the benefit of the previous administration lowering expectations for him. Miller follows Mel Lastman, whose council was renown for its inability to enact policy in a calm, rational manner. By comparison, people still remember Mike Harris’ first 100 days in office back in 1995. Although those days ripped the heart out of Ontario’s cities and, in the end, helped cause the $5.6 billion deficit McGuinty now wrestles with, by god Harris worked fast and accomplished what he set out to do. By comparison, McGuinty has been a lot slower and more cautious — a good thing, in my opinion, but easily misconstrued as being timid by others.

I’ve never understood the propensity for neo-conservative governments to promise to enact radical policies within 100 days of taking office (Harris did it, as did Gordon Campbell in BC). It’s almost as if they don’t want the public to have second thoughts about what they are about to do. Government in haste is often bad government, and it’s a perilous game to play with voters lives, but lots of voters, who don’t have an appreciation of what real good government is, appreciate this haste, likening it to a sense that their government is actually doing something. McGuinty understands this, and is giving us better government than would be possible under Eves or Harris, but he is paying for it for these reasons.

By comparison, Miller didn’t make many 100 day promises, and he stressed that such quick fixes wouldn’t do Toronto any good. Toronto’s problems are going to take years to fix, he knows this, and I suspect the general public knows this. And, even if the majority don’t know this, they still end up comparing Miller to Lastman, and you know who ends up coming out more favourably.

And Miller has moved boldly in his first 100 days of taking office, though not in a manner that destroys government. When confronted with the massive shortfall in revenues, both Miller and McGuinty went to the people with their problem. Good move. McGuinty commissioned an independent auditor and, thus far, has managed to be more open about his government’s finances than Ernie Eves ever was. Miller, on the other hand, went to the public more directly, commissioning seven open-house public consultation seminars. He took extra time to explain the details of the shortfall, what caused it, where the money goes, and where it will have to come from.

My sense of the public is that they know that McGuinty faces an unexpected $5.6 billion deficit, but they don’t fully understand why the deficit has occurred, where the money is going to, or if the government has any idea how to resolve it. Torontonians, on the other hand, have a better idea of not only the size of their shortfall, but the reasons behind it, and the prospects for resolving it. The Sun has dismissed these popular forums as public relations window dressing, but even if so, it’s PR that McGuinty might wish that he had used.

I am far from ready to write off McGuinty’s administration. He’s in a heck of a quandary and he’s taking great care to ensure that it doesn’t get worse. In that respect, he’s governing far better in his first 100 days in office than Harris did in eight years. I am, however, even less ready to write off Miller’s administration. He’s in as much of a quandary, but he appears to have a clearer roadmap out of the swamp, and his approach has actually started to turn up noticable results.