I have to confess, I hadn't seen pictures of Chernobyl, until now.

Did you know that it's safe to motorbike through the area (sort of), so long as you stay in the centre of the asphalt? Go have a look.

Number 1 on the things you don't want to hear while on a space station:

A crew member at the international space station said he heard a strange, metallic sound on Friday like the mysterious noise the astronauts heard four months ago. Flight engineer Alexander Kaleri was speaking to flight controllers in Moscow when he heard a loud noise. It seemed to be coming from an instrument panel in the station's living quarters, he said. "I had the headset on, so I didn't hear it very clearly," Kaleri said. "But it sounded sort of like a drum. It sounds sort of like a sheet of something being bent." 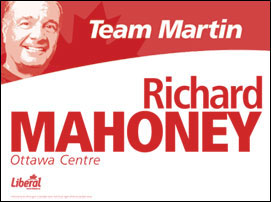 From Warren Kinsella comes this graphic on my right showing the latest in campaign signage for the new Martin-branded Liberal Party of Canada. It highlights, rather strikingly, just how much the Martin government is running away from that bogeyman of a Chretien legacy.

A couple of people have linked to me of late, and I'd like to tip my hat to them.

Stephen Taylor is not a companion of the first Doctor, he is a Queen's University student who stood for the Conservative party nomination in his riding.

Huh. Now I have links from confirmed NDPers and Conservatives. I think my centrist credentials have just been reaffirmed.

Navigate the Streets also asked for my attention. This blog covers a very interesting race that's being organized for a number of cities across Canada. Can you navigate your town's streets on foot? How pedestrian friendly is your home town?