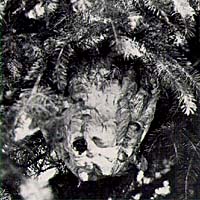 Okay, I want it to be noted that I spent the past fifteen minutes or so enduring highly phobic reactions as I searched through the Google image search on the phrase "hornet nest", all in my drive to come up with a useful image to illustrate a metaphorical point!

Ack! The first person who buzzes in my ear is either going to see me velcroed to the ceiling, or get a bloody nose. Or both.

Don't say I don't do anything for you!

Now that that's done with, on with the post...

Well, that was fun.

Take a pretty prominent blogging website, add a tightly knit blogging community sensitive to issues of digital rights, mix in one overzealous government lawyer, stir well and run. That's the recipie that got followed yesterday. It was amazing, really, watching all of the other Canadian blogs fall on the Canadian government like dominoes. It was quite a uniting act, I must say: the Canadian blogosphere's first ever national controvery. Blogs from across the spectrum, left, centre, right and neutral, were nearly unanimous in their condemnation of the government's inflexibility and its outright stupidity. And, overnight, traffic to BlogsCanada went up by a factor of something.

Of course Jim Elve expected this. Counted on it even, as he issued his press release. The government's little misstep has granted him more publicity than he could possibly have dreamt of. For this reason, I think Jim's been a little bit naughty, setting himself up, knowing that he'd be kicked, so that he could fly through the goalposts.

But just because an agency's actions are predictable doesn't make them right or intelligent. Ultimately, this is a headache that the government of Canada brought onto itself.

Speaking of Getting Stung

Remember the anger over some clueless blogger's plagiarism of Vicki Smith's popular web post? Well, here's an update. Initially, the clueless blogger seemed to realize his mistake. He took down his offending post and apologized, both publically and privately to Vicki. Vicki noted that his private apology sounded a lot less contrite than his public apology, but was willing to leave it at that. However (and you knew there had to be a however)...

The man didn't leave well enough alone. As the news has broken all over the Net, including this post in the Blog Herald, the man's website had received a burst of traffic, and the man was stupid enough to joke about it and brag about it. How stupid? Well, consider:

This, coupled with his somewhat less than academic understanding of why plagiarism is wrong, finally prompted Vicki Smith to contact the president of the Bible College the man attends. She was sure to save a copy of the clueless blogger's website and send it to the college president before said clueless blogger could go in and madly remove links and delete posts. She followed this up with links to the Google cache so that the college president could see the material online.

The matter is now before the clueless blogger's Dean of Students.

(writes in notepad): For future reference: don't tick off Vicki Smith. Or, if you do, make sure you have your affairs in order. But just don't tick her off. That's the wisest course of action.

In Erin Noteboom's Ghost Maps: Poems For Carl Hruska, the life of a WWII veteran is movingly rendered in a sequence of spare, vivid poems. Crossing boundaries between genres, Noteboom employs dialogue and smooth shifts in perspective to create a fictionalized biography in verse. With echoing imagery and endings both understated and reaching, Ghost Maps unfolds with unerring grace.

That's quite an honour, especially when you consider who else has been nominated.

As for my own writing, the revision to Rosemary and Time is nearing completion. I hope to have a new draft ready by the end of the month to send out to my next round of publishers. I think we've made some substantial improvements, and forged some stronger connections within the story. Consider: now that Rosemary is 12 instead of 14, there comes some question of how she'd have read A Midsummer Night's Dream at such a young age. But how about this: instead of reading it, she and her classmates attended a high school production of it. Her brother Theo, the object of Rosemary's quest through the Land of Fiction, played Puck.

Erin came up with that idea earlier this week and I think it's really rather strong. Strange that such a good idea could come up so late in the writing of the story, but that's the way it works.

The :Trenchcoat Farewell Project: is also nearing completion. My team of proofreaders has scowered the first half of the project and have found a number of elusive typos. I'm still on track for going to the printers in a couple of weeks, with a release in late May -- the thirteenth anniversary of the release of the first Trenchcoat.