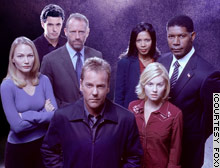 So, Erin and I have gotten into 24 after far too long. We were intending to rent the DVD series box sets, but the latest season has been surprisingly accessible and compelling as the counter-terrorism team struggles to contain an outbreak of an engineered ebola virus. Sad though it is to say, last Tuesday Erin and I were looking forward to tuning in to people bleeding from their orifices.

So imagine our surprise when we tune in and find that people bleeding from their orifices have been preempted by George W. Bush grinning at the camera.

We have been enjoying 24, even though we came in about halfway through the third season. For those who don't know, 24 is a very tightly written thriller wherein Jack Bauer (Harbord C.I. alumnus Keifer Sutherland) leads counterterrorist operations against various evildoers who threaten the United States. Basically, it's your typical gritty spy-versus-spy that plays it much more realistically than James Bond. However, 24's special gimmick is that the story is told in real time and, moreover, each season of 24 episodes tells a single story, one hour at a time.

Not only do the writers have to plan everything down to the minute detail (no pun intended), other things get added to the mix. The heroes invariably pull all-nighters when the story is on and, by the end of the season, many are operating just on adrenaline alone, fighting their own fatique as well as the implacable enemies.

When 24 first came out, it won rave reviews from the critics for its groundbreaking (for television) style as well as the quality of its acting, directing and scripting. I deliberately avoided it, however, as I thought that the story was made for DVD. Were I to miss a single episode, wouldn't I lose track of the story completely? I also thought that this distinctive style-gimmick couldn't be sustained beyond a couple of seasons. As a result, I missed the entire first season, which is considered by some to be a classic. I also missed the second season, which apparently cuts the first season close.

The third season, however, grabbed my attention in its 16th hour, and the fact that I'm able to follow along is, ironically, perhaps an indication that the tightly-wound writing of the series has started to unravel. Consider the story so far: Jack Bauer and his folks at the Counter Terrorist Unit (CTU) deal with a threat by the drug lord Salazar to release a deadly and highly contageous virus in the United States unless Salazar's brother, Hector, is released from prison. Indications are that Salazar actually has the virus. CTU scrambles to respond. There are a few double bluffs (Jack becomes a double agent and then reveals himself to be a triple agent to try and grab the virus from Salazar), and then the virus falls into the hands of a different terrorist, who hands it over to a terrorist mastermind, and who releases it inside a Los Angeles hotel.

Confused? Well, I wasn't. Maybe it's a testament to the quality of the production crew that I can tune in at 4 am (16 hours into Jack Bauer's third-worst day of his life) and I can read the plot as simply as: bad virus unleashed. Good guys struggle to contain as bad guy threatens armaggedon unless the President complies with demands. The Salazars were killed off at hour twelve. The teenage drug-dupe who CTU thought was inadvertantly smuggling the virus into the United States was scared straight and given his happy ending around 6 pm. Major characters have risen and fallin in the span of four hours. Interesting television, but maybe not exactly "real time".

I won't know this for sure until I rent the first season of 24, which I now intend to do, soon.

I have to admit that the real-time aspect of this story is tempting to poke fun at. Whenever the show goes to commercial, it shows a digital clock ticking ahead. When we come back, we see the clock again, and it has ticked ahead the length of the commercial break. It becomes funny considering how well the plotline fits into the 24 hour scope of the program, and the 42 minute scope of the episodes. At one point, when Jack Bauer learns of some particularly disturbing news, he tells his friend, "I've been given a lot of information. I need to think."

What did Jack think about in those two minutes, I wonder? "I should buy a new car? I could have had a V8? Is my life insurance paid up? Playtex maxipads really are thinner?

But we usually stop mocking when we come back from commercial.