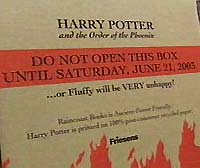 I’ve discovered an electronic link to a news article I’d read months ago, about how book publishers are madly searching for “the next Harry Potter” and flooding the marketplace with clones of our young, feisty wizard.

“We’ve been selling books for 15 years, and you see some trends come and go, but we’ve had to double the size of our fantasy section,” says Eleanor Le Fave, the manager of Toronto children’s bookstore Mabel’s Fables.

Across the country, the story’s the same. “There’s been a real interest in science fiction and fantasy for quite a few years now, ever since Harry Potter catapulted into fame, and publishers are responding to that, and there seems to be so much more being published in that genre,” said Phyllis Simon, the owner of Kidsbooks, a Vancouver store specializing in children’s literature.

“Now, not all of it is outstanding, as you can imagine, but children, once they get into that mindset, they really want more of that high fantasy adventure.”

Hmm… I’m not sure if I agree. If any publisher thinks that he or she can duplicate the success of Harry Potter with a clone, he or she will be in for a world of disappointment. Why read a copy of Harry Potter when you can read the real thing? And if readers can’t get enough of Harry, Ron and Hermione’s exploits, that’s what fan fiction is for. To publishers, however, nothing succeeds like success, and like other businesses, they have a tendency to flood the market if the market shows the slightest interest in something.

Not that it isn’t possible to do something new and different and still attract the audience of Harry Potter. Jenny Nimmo’s Charlie Bone series has been (unfairly, in my opinion) singled out as an obvious Harry Potter carry on. In it, a young boy named Charlie Bone learns of his magical heritage and is immediately packed off to boarding school to hone his skills and incidentally fight evil. This superficially bears some resemblance to J.K. Rowling’s work, but only because both books share the same elements that J.K. Rowling used so well, but which she herself did not invent. The old boarding school trick predates Dickens, and the coming of age story is as old as time itself. Even the school for Wizards and Witches predates her. And while J.K. Rowling excells at the Wizardry universe that she has created, Jenny Nimmo roots her storytelling in the Welsh legends that she knows so well.

So while I’m not blaming the authors for trying to cash in on the Harry Potter craze, the ones that are getting any attention (Jenny Nimmo, Eoin Coifer, Lemony Snicket) aren’t doing that, but instead are crafting their own stories. On the other hand, I suspect that the publishers are guilty of embarking on a bit of a Harry Potter gold rush. Witness the doubling of the size of the children’s fantasy section in bookstores. Everybody is getting in on the game, but as the market saturates, most of the publishers won’t benefit from it.

I can understand why businesses would want to find the next Harry Potter, but I’m not sure if these expectations are realistic. I don’t doubt that there will be another Harry Potter-scale phenomenon, and I wouldn’t be surprised if the next big thing comes off of the science fiction and fantasy shelves (this genre is so flexible and timeless that I’m convinced that most of the best ideas for children’s literature are going to come from there), but I doubt that our next hero will be in a boarding school, learning magic while some dark evil comes into play.

Who was it that said that “history doesn’t repeat itself, but it rhymes”? The same could be said with publishing fads. Instead of leaping on the Harry Potter bandwagon, publishers might be better off running beside it. Eoin Coifer makes a stab at this. His Artemis Fowl shares Harry Potter’s youth and feistyness, but he is a villain. Mr. Coifer also tries to marry the high fantasy world of fair folk, dwarves and goblins with modern technology, a mix that doesn’t quite gel. Still, for readers attracted by the story of Harry Potter, they might be drawn to Artemis’ youth and exuberance and the mixing of the magical world with the real, and they might be kept by the new and decidedly different take on the genre.

So I expect that the next big thing in children’s literature will be a few steps beside Harry Potter rather than running behind him. Look for that. Where is science-fiction’s answer to the Harry Potter series, for example? Or what about urban fantasy? Where is the kids-lit equivalent to Emma Bull’s The War for the Oaks (Eoin Coifer comes the closest, so far)? That’s where I’m putting my money.

Good News on the Literacy Front

Harry Potter is having an impact on the reading activity of children. From the same article quoted above:

And it should be noted that kids are reading other things, too. The Toronto Public Library reports that nine million children’s items circulated last year, up 4 per cent, and it’s not just fantasy: Coming-of-age stories such as The First Stone by Don Aker and Arthur Slade’s Tribes are in healthy demand.