The City of Marble and Chrome 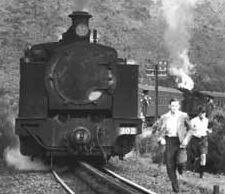 I’ve been workshopping more of Rosemary and Time with Erin. We’re now up to chapter eleven, more than three quarters of the way through. We’ve, ironically, passed the scene where I started this long rewrite, where Puck sacrifices himself so that Peter and Rosemary can cross over to the final challenge.

The scene I rewrote (included below) was set inside a railway tunnel, and one of the suggestions Erin made was to make more of that. Sometimes, especially in long scenes of dialogue and exposition, the setting can fade out from around the characters and we’re reduced to a pair of talking heads. In this case, this problem may have been exacerbated by the fact that the tunnel is dark, and there was very little for me to describe, visually. Settings, of course, have more than visual elements, but one of my weaknesses as a writer is that I don’t use them. I play with sound a little, and smell less so.

So, Erin encouraged me to put the elements in. And this is what I came up with:

They trudged through the dark tunnel, Peter scuffing ballast, Rosemary limping. She was too stunned to talk. He watched her quietly, reached for her once, but she swatted his hand away and kept walking. The click of scuffed stones echoed back at them.

After several minutes, the light at the other end swung into view and a fresh breeze cut through the smell of damp soot. Then their clothes changed.

Peter stopped. “Hey!” His voice rang through the tunnel like the inside of a drum.

Rosemary kept trudging on. “What?”

He stepped after her and touched her shoulder. She stopped. “Our clothes.” He waited for a response, but none came. “They changed; this might tell us where we are. What are you wearing?”

She sighed, then felt her feet. “Shoes.” She patted herself. “Kilt, blouse, jacket. Uniform, maybe.”

Rosemary looked back the way they came. “Another story. You’d think we’d be closer after Puck—” She stopped short.

She turned back along the tracks. “Let’s go.”

“Rosemary!” Peter gripped her shoulder. “Are you okay?”

She rounded on him. “What do you think? We’re no closer to finding Theo, we’re being chased down by characters, and the one person who could help us the most d- d-” Then she spat it out. “Dies!”

She sputtered. “I know a death scene when I read it! He— he sacrificed—”

“Did you see a body?” He stared at her through the darkness. Her pale face was all he could see beyond a silhouette. “Puck’s… you know, special! You don’t know he’s dead.”

“He could be hurt,” she breathed. “They hurt him; at the haunted house, on the cliff … if they could hurt him, they could kill him. And all because of me.” She shivered.

“All of these characters, they’re after me because of something I did. But who gets hurt? Theo, and now Puck.” She kicked the ballast and shouted. “I hate it!”

“I shouldn’t have dragged you here, Peter!” she muttered. “Now they’re after you too!”

He grabbed her by the shoulders and shook her. “Don’t say that!”

“First off,” he said, calm but firm, “you didn’t drag me, you hit me over the head trying to stop me. But I came anyway. Do you really want to do this alone?”

Rosemary didn’t meet his eyes. She looked at the stones.

“Well, I wouldn’t let you,” he snapped, giving her another shake. “Being alone is the worst thing in the world. So, I’m here. Deal with it! We’re in this together, and we have to keep going if we want to get out!”

There was more silence. Then Rosemary wrapped her arms around him. “Thank you.”

He hugged her. “You’re welcome.”

“Now you’re here,” she said, “Promise me something? Stay close. Don’t let me lose you like Puck.”

He hesitated. Then he laughed. “Stay close? They’d have to pull me off you.”

Rosemary gave him an extra squeeze. Then the tunnel behind them started to glow.

Peter looked up. An engine hammered. A whistle blew. “Oh, no!”

They dashed along the tracks, their feet skidding on the ballast. The light at the end of the tunnel seemed miles away, the approaching headlight behind far too close.

With seconds to spare, they made it through the opening, jumping aside the moment they were outside. The wind of the locomotive’s wake blew them off their feet and sent them rolling down an embankment.

The train had been steam powered when it entered the tunnel. Now, as Rosemary looked up, it was electric, gleaming white, shaped like a bullet with a rounded nose and streamlined edges. It raced along the embankment at five times the steam engine’s speed. The embankment fell away and the train curved across a high bridge over a large hollow like a crater. Filling that hollow was a city.

Rosemary looked at the city, and scrambled to her feet. She stared in horror.

“I told you travelling at the speed of thought gets easier with practise!” said Marjorie.

She, Andrew and John materialized, laughing. The laughter stopped when they looked around. They stared in awe.

“What is this place?” Marjorie gasped.

“What is this place.” Rosemary whispered.

“I know this place,” said Rosemary. She pulled off her glasses and peered at them. They had changed into horn-rims. She shook.

I find it interesting that focusing on the setting a bit more allowed me to enhance character. Now that you can see Rosemary, you can see how stunned she is by Puck’s death. The use of visual and auditory elements to describe setting enhance mood, which if used properly enhances character.