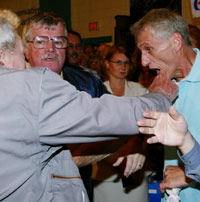 Martin's campaign is still in trouble. However, his strategy of piling the negatives on Harper and waiting for something to stick, while cynical, was sound. The gamble depended upon an overzealous Conservative candidate or supporter doing something that lived up to the poor reputation the Liberals were trying to hang the Conservatives on. Harper knew this, and ran as tight a campaign as possible, campaigning on moderate policies, and doing as much as possible to silence his more radical supporters. If Harper managed to do this throughout the election, he could win. But five weeks is a long time in the campaign pressure cooker.

PC widower Michael Wilson points me to the first sign that Conservative composure might have cracked in a big way. It's one thing for Liberals to send candidates into enemy camps to stir up confrontations, but it's quite another for the Conservatives to throw the first actual punch -- and at an elderly man no less.

This is a picture that is going to run, front page, in every single newspaper across this nation this morning.

I've never said so, but I've always felt that a subset of Conservative supporters were Stephen Harpers' achilles heel. Martin's Liberals might have engaged in questionable campaign tactics but, as Paul Wells noted, they take (or, rather, ignore) public criticism exceptionally well. Some of Harper's supporters don't. Some Conservative supporters (and, note, I don't count any of the regular commentators on my blog among them) tend to get a little shrill when Conservative leaders or their policies are criticized. Rational debate is met with shouting. Shouting is met with louder shouting. Rather than try to sound like the rational thinkers of this campaign (which, in my opinion, does more than anything else to ensure you get elected in this country), they throw nuanced arguments aside. It may have something to do with the black-and-white vision that ardent conservatives and extremists on the other side of the spectrum sometimes have. Why debate anything when your opponents are just wrong?

I understand that it is hard to be civil when a protester shouts at you, but Michael Wilson notes that there are ways to deal with unruly people and still remain rational. In his words:

Usually in situations with protesters our party supporters were advised to link arms and form a chain to try to keep the protesters away from where the leader was speaking. If the protesters became vocal, so did our folks, singing "O Canada", or something. There was never any violence, even when we were beset by organized busloads of youth party members from other parties.

The Conservatives lost a lot of their moral high ground today. It's still early to say whether the photograph of a Conservative party supporter punching an elderly protester in the face is going to collapse Stephen Harper's campaign. Martin hasn't moved to capitalize and, knowing Martin, he's just as likely as not to capitalize in a politically inept way, thrusting the advantage back to Harper. But if the Liberals manage to eek out a hair's breadth majority on June 28, this moment in time will have been the turning point.

It is more than unfair of me to say that arrogance, anger and deception are at all the sole purview of the Conservative party. The truth is, there exist millions of Canadians who, in their passions, tend to forget that this election is not about black and white, enemies and friends, it's about Canadians and Canadians.

I have met dozens of people online in my journey through the blogosphere, of all political stripes and shapes. I count myself on cordial terms with supporters of five of the major political parties, of Democrats, and even Republicans.

It is our democratic right to believe in what we believe and to defend that belief verbally. But in this society where the right to swing one's fist ends at the tip of another's nose, we have an obligation to respect the rights of others to disagree with you. This is not to say that we let contrary ideas go without a debate, but through it all there must be a realization that, in the end, the person on the other side is no different from you; is just as likely as you are to be right or wrong, and is due the same respect and deference that you wish for yourself.

I'm no angel by any means, but I'm still sensitive to when I see political passions get tinged with hate, when I see people write off other people, be they Liberal supporters or Conservative, Democratic supporters or Republican, as somehow less than themselves, even less than human, because they believe in ideas which are supposedly Statist, or bigoted. Because once you close your mind, you make that your reality.

Posting will be light for a little while. Today, Erin, the in-laws and I will be heading to Montreal, where we will attend the annual general meeting of the League of Canadian Poets. Erin is up for a major award and, although we don't expect to win, it's an honour to be nominated.

We'll be spending much of the weekend seeing beautiful Montreal, and I'm looking forward to the trip, even though I'll be away from my e-mail for the weekend. I'll put up some pictures when I get back, though. So stay tuned!

(Curious as to when I'll see my first ever BQ campaign sign...)