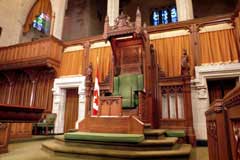 The race for the Speaker’s Chair will sound something like this:

Barring changes due to recounts, the Liberals govern a house that’s as unstable as that faced by Joe Clark after the 1979 election. The Liberals and the NDP control 154 seats, the exact same number controlled by the combined forces of the Conservatives, the Bloc and Mr. Chuck Cadman (Independent). Whichever side takes up the Speaker’s Chair concedes the house. Who gets to be Speaker in such an arrangement? My money is on Chuck.

The results of the Bow. James Bow Election Pool will be tabulated and posted on this site and on Blogs Canada’s Election Group Blog later tonight. Stay tuned.

Liberal party supporters can cheer all they want, but at best, Paul Martin can be deemed to be on probation, both with Canadians and with his party. The man who looked like he could win over 200 seats back in January was humbled today, and in any other situation I’d say that his job was finished. However, I don’t think Liberals, renown for their sense of self-preservation, would dare move on a sitting prime minister atop a minority house. So Martin has the next few months to show those leadership skills he supposedly had but did not reveal during the election campaign. If he can negotiate his way through government and win a majority in the next election, his reputation will be restored. If he loses, then goodbye Paul!

Actually, there is a good argument to say that, deep down inside, the Liberals envy the Conservatives at this point. The Liberals have been denied a chance to renew themselves through a cathartic, wide-open leadership race. The Conservatives, on the other hand, have been handed time to reflect upon the message Canadians have sent them, and to build policy on that.

If the Conservatives looked really hard at the numbers, they wouldn’t smile, either. In the 2000 election, the Canadian Alliance and the Progressive Conservatives combined to take roughly 35% of the vote. Now, despite uniting and fighting a common foe, and despite that foe being the weakest Liberal leader since John Turner, the new Conservatives can only manage 29.6% of the vote. I once heard a Conservative supporter say that if the Conservatives garnered anything less than 30% of popular support, he would eat his hat. Well, I hope he likes Stetsens.

Conservatives need to realize that while many Canadians detested the Liberals’ lack of integrity, there remains general support for their policies. Before you say that the Liberals have always governed with only 40% of the popular support and possibly a 60% opposition to their policies, remember that the opposition has always split on either side of the Liberal platform. 30-40% of Canadians may hate the Liberals and everything they stand for, but that faces up against 40% of Canadians who have supported Liberal policies in the past, and 20-30% of Canadians who think that Liberal policies don’t go far enough. Rather than call the Liberal government a dictatorship oppressing the majority of the Canadian public, it’s more accurate for Conservative supporters to claim that we have a tyranny of the majority, here.

That is, if the Conservatives simply want to moan and complain and stick to their principles. The Conservatives can still grant the government that many Canadians (including Liberal party supporters) are craving if Harper stood up tomorrow and said:

“My party will not, ever, reopen the debate on abortion, capital punishment, gay marriage and the gun registry. We accept the verdict of Canadians as spoken in the 1997, 2000 and 2004 elections. We will take those programs that Canadians hold dear and we will run them more efficiently and openly, so that Liberal waste doesn’t threaten their integrity, so that Canadians get value for their tax dollars, so that those programs still exist, and run better than ever, at the end of a Conservative majority mandate. Those Conservative Party members who disagree with me and who believe that these issues should be the primary focus of the next government are welcome to quit the party and join Christian Heritage.”

This would translate into at least twenty new seats for the Conservatives in the next campaign.

Will the Conservatives get this message, however? Discouragingly, some signs say ‘no’. One after another, defeated Conservative candidates pointed to “Liberal fearmongering” as the reason for their defeat. Such statements highlight, once again, an unwillingness by Conservative MPs to contemplate the fact that they may have lost simply because the majority of Canadians disagreed with their policies. Refusal to acknowledge this shows a mistaken belief that Canada’s interest and conservative interest are inextricably tied.

Yes, though Conservative Party supporters may be incredulous, this means that Canadians are willing to bang themselves over their heads with a tired, complacent and increasingly arrogant Liberal government until somebody comes along and provides a fresh, new centrist alternative. Hard though it is for Conservatives to contemplate, most Canadians don’t want hefty tax cuts, and most Canadians support their government institutions. There is something to be said for standing up for one’s principles, but if the Conservatives were as democratic as they claimed, they would see that Canadians’ number one priority is not health care, municipal infrastructure, tax cuts or military spending: it’s integrity — an integrity that protects the services that our governments provide, instead of eviscerating them.

The clearest message of all in this election is that Canadians are tired of the old ways of governing and want something new. The message that might not get through to the mainstream parties is that all of them, Liberal, NDP and Conservative, are candidates for the dustbin of history. Just as soon as something better comes along.