The Death of Fear II 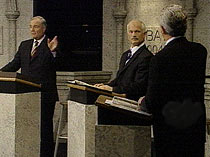 About eight months ago, I wrote about what I saw was an interesting trend in the Ontario provincial and municipal elections. In both cases, I argued, one opponent was targetting the front runner with negative attacks and, shockingly, the effects of those attacks boomeranged back on the attacker. Ernie Eves, unable to run on his record and out of new ideas, attacked Dalton McGuinty at every turn, but McGuinty rose above it and captured the province in a landslide. John Tory, looking for a little edge in a close and hard fought mayoralty race, latched onto what was perceived as a major gaffe by frontrunner David Miller (musing about the imposition of tolls on Toronto expressways) and hammered it into the ground… to no effect. Two elections were fought and won by candidates who rose above the fearmongering. I called this the Death of Fear.

One commentator did disagree with me strongly on this point, noting that David Miller engaged in some fearmongering of his own. This commentator cited a campaign brochure that linked John Tory and Barbara Hall to the proposed introduction of jet planes to the controversial Toronto Island Airport. This was the negative advertising not grounded in facts that papered the glass house that Miller and his supporters shouldn’t be throwing stones from.

The thing is, I never saw those ads. They weren’t run on television, and they weren’t featured in the media — at least, so far as I saw. I only came to see these ads during a documentary on Miller’s campaign that aired six months after the municipal election. So, as advertising goes, this is not what I would call widespread fearmongering. Publishing brochures linking John Tory to the proposed introduction of jet planes to an unpopular airport may have been as inaccurate as John Tory leaping on David Miller’s speculations and saying that a Miller victory meant the imposition of road tolls, but it was Tory and his supporters that organized demonstrations beside the 401 and who took the issue into the news media. It was the Tory campaign that made the more noise… and it was the Tory campaign that failed to make the issue resonate with Torontonians. Eight months into the Miller mayoralty, and we’re not even close to imposing tolls on our highways, but it was Miller’s leadership that will likely prevent the Island Airport from expanding (and for which they are rewarded with a (in my opinion) spurious half-billion dollar lawsuit). And I think, at the back of peoples’ minds, they knew eight months ago that this would be the case.

Well, since then we’ve had a federal election, one as negative as any we’ve seen in the last little while. Paul Martin’s Liberals fought off dashed expectations, whiffs of scandal and corruption, internal divisions and a united and surging opposition to eke out a minority government. Their campaign relied heavily on demonizing their opponents. The final result was a surprise to many who expected the Martin government to fall. The verdict among some commentators is that negative advertising works. It saved the Liberal party. I disagree.

It is interesting to compare this election to the previous two because, really, no party here tried to take the high road this time. Even the NDP, which ran a campaign emphasizing the benefits of their party rather than the drawbacks of their opponents, hurt themselves when leader Jack Layton made immoderate, off-the-cuff remarks accusing Paul Martin of culpability in the deaths of Toronto homeless people. What I find most fascinating, however, is that while I cannot think of a single attack ad made by the Liberals or the Conservatives which really helped their cause, I can think of more than a few that hurt them. For those who say that this election shows that negative advertising works, citing popularity drops each time a new ad hit, I would argue that many of those drops were self-inflicted. Rather than seeing two boxers landing punches on each other in the ring, they were actually standing in opposite corners, bloodying their own noses.

Follow the numbers: the Liberals started the election at 41% popular support and dropped precipitously in the first week of the campaign to close to 33%. The Conservatives started the election at 28% and rose to meet the Liberals. The NDP danced by themselves just under 20%. And after the first week of the campaign, the numbers basically stalled. They remained within their statistical margin of error of their newfound numbers even as the campaign got negative. Ipsos Reid numbers partway through the campaign noted that attempts by Liberal advertisers to bring down Stephen Harper were having little effect because, at the time, nobody believed that Stephen Harper had a serious chance of becoming prime minister. When the Liberals tried to engineer confrontations with opponent candidates, it backfired, and they abandoned that tactic very quickly. Even the late swing to the Liberals cannot be directly attributed to any specific piece of advertising by this party. It could just as easily have been a rational assessment by the voters of the flaws in Harper’s fiscal plan.

And what about the Conservatives’ frustration? They ran a negative campaign as well, and they had plenty of things to be negative about. Most Canadians likely to vote were probably already aware of Adscam and other hints of growing Liberal incompetence and arrogance. “Vote for us and put an end to ten years of Liberal mismanagement!” cried the Conservatives. “End this nightmare!” But the Conservatives never seemed to crack the 33% barrier, primarily because while Canadians knew every reason why the Liberals deserved defeat, they were short on reasons why the Conservatives deserved victory.

Michael Wilson finds a correlation between the negativity within a party’s message and their (apologies for this ugly phrase) “negative momentum” in the corresponding polls. In my opinion, Canadians seem to tune out negative advertising saying, in effect, “Yeah, yeah, Stephen Harper is the anti-Christ, whatever! But what would you actually do for this country?”

If negative advertising works at all, it is only if it resonates with concerns that Canadians already have about a candidate or a party. If it doesn’t resonate at all, the attacks bounce back on the people who make them. Witness again the heat Jack Layton took for essentially accusing Paul Martin of murder. Witness moreso the heat Conservatives took when members (and especially the Toronto Sun) equated Liberal and New Democrat supporters with pedophiles. Canadians knew these attacks had little if any basis in fact. They saw the attacks instead as evidence of a candidate’s propensity for shrill hyperbole, and excellent evidence against a candidate’s ability to be prime ministerial.

To further illustrate the ineffectiveness of fearmongering from the Liberal side, note that the drops in the Conservative numbers coincide moreso with mistakes on the part of Conservatives, not Liberal advertising of same. Not only did the Conservatives take a hit when their attempt to paint the Liberals as soft on child pornography backfired, they took a hit whenever Cheryl Gallant, Frank Lualla and finally Randy White speculated on Conservative policy. Canadians did not take hyperbolic Liberal statements on the socially regressive nature of the Conservative Party at face value; they only responded when the Conservatives presented the evidence before them. It also has to be noted that the response was, at best, subtle. Despite everything, the Conservatives and the Liberals both ended up with some of the lowest levels of popular support their movements have ever seen.

Maybe I’m naive to think that Canadians in general are smarter than proponents of negative advertising seem to give them credit for, but Canadians in general do seem quite adept at forming opinions that are resistant to the effects of such advertising. Be that as it may, we live in a democracy with free speech, and if Martin’s campaigners want to waste their money trying to convince Canadians that Stephen Harper is a reptilian kitten-eater from another planet, there’s little I can do about it, except not enjoy it. And commit myself to vote against the party that gets to be the most negative.

Because, you know, some Canadians do take an interest in the political process, and they remember how they voted. Attacks on the positions of the parties are very easily read as attacks on the people who supported them. When Harper and other Conservatives beg Canadians to vote against “ten years of Liberal mismanagement”, I have to point out that I as an average Canadian voted for seven of those years, and I’ve been reasonably satisfied with nine of those years. Much as I might agree with criticism of the Liberal party as it now stands, Harper is calling upon me to turn my back upon myself.

If Harper or any political leader wants my support, he would do well to avoid inadvertently attacking me for choices I made ten years ago. Look to the future, and I may look with you. Attack the past, and I may end up taking my support elsewhere.