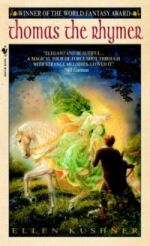 Over the weekend, Erin made this observation:

The creepy thing about Thomas the Rhymer is not just the fact that, when he came home from his seven years in Elfland, he had the "gift" of honesty -- he could not tell a lie.

It was the fact that, because he couldn't tell a lie that everything he said became true. For example, if you asked him how and when you were going to die, he'd tell you.

Erin thinks it's past time for an urban fantasy retelling of the Thomas the Rhymer story. She may tackle it, who knows?

Long drives, especially those where somebody else does the driving for long periods (thanks Wendy!) are good times for meditation and the composition of story ideas. I came up with two while reclining in the passenger seat of our rented PT Cruiser between the Wisconsin Dells and the Illinois border. I'm working on one of these ideas right now and I'm not ready to tell you more about it. The other one, while intriguing, I dropped.

Those of you who haven't read Clifford Simak's They Walked Like Men should find a copy and do so. Ludicrous title; good book. The story is about a 1950s style investigative journalist observing an attempt by aliens to take over the Earth by literally buying it out. Over a three week period, the aliens have produced humungous sums of completely undetectable counterfeit cash and are buying up businesses, homes, apartments, factories, all across the United States. The aliens have made a fundimental mistake, however; one which the journalist protagonist points out to them: the aliens don't understand the connection between money and work. Instead, they see money as some miracle substance that all humans crave. They think they've bought the world, but all they've done is precipitated the grandest fraud in history.

Not that it really matters, the protagonist journalist notes to himself. On Friday, the United States had twice the amount of cash in its economy than it should have. Said extra cash all disappeared on Monday. The aliens, without knowing it, had still managed to perform a trick the Nazis had hoped to pull on Britain during the Second World War: destabilizing the British economy with vast amounts of counterfeit currency. The journalist protagonist still has to work very hard to expose the aliens' conspiracy to the authorities and thanks to the aliens' miraculous attraction to the scent of skunks (don't ask), he's able to do just that.

It has been said that there are less than ten original plotlines out there in fiction, and a number of writing ideas are simply slight twists to ideas that other authors have explored before. Clifford Simak's book was read to me by my mother when I was around ten years old, and the images in that book stuck in my head for the decades since. Rereading it did not diminish my appreciation of the book. For all this time, it has been at the back of my mind as a plot that I myself would have enjoyed writing. If only there was an idea variant to connect it to.

Back in high school, I took a grade 12 economics class taught by Mr. Mucha (pronounced Mew-ha), who is now sadly deceased. This man taught us all about economic systems and was an unabashed proponent of the free market. For those of you who believe that the education system is a haven of propagandizing liberals, I offer Mr. Mucha and his colleague Mr. Delios as counter examples. Furthermore, I'd suggest that if you want to be sure that your child gets a touch of right-wing thought with his or her left, make sure they take a class or two of economics. Mr. Mucha liked to goad me for being a socialist; in truth, I think he was creating a lively class environment in order to enhance our education.

Anyway, Mr. Mucha (and Mr. Delios, but Mucha especially) taught me almost everything I needed to know about economic systems in a way I found interesting (contrasting to the dry Economics 101 of my University years), and one thing that they emphasized was the free market's self regulation -- a self regulation that they considered built into the system, but which I considered somewhat miraculous and disturbingly open to failure.

In one exercise, they talked about how "traditional" economic participants fail to understand the self-regulating nature of the free market. Who decides when to buy fish and when to buy meat? they'd ask, and the market proponent would say, "Nobody. It just happens" (thanks to the flexibility of pricing and the law of supply and demand), and the traditionalists would say "impossible!" A mental block, my professors argued, who then assigned us a task of writing up three examples of what could happen if the free market's self regulation failed and, for example, everybody decided to buy fish all at once. The fact that our examples didn't happen in real-life was supposed to show that the self-regulation of the free market economy was real, but it also gave me the story idea that coalesced around the images of Clifford Simak's work fifteen years later while driving south from the Wisconsin Dells.

What if aliens, through the use of subliminal messages (possibly inserted through unrelated advertising) manipulated us to such an extent that the self-regulation of the free market economy started to break down? For example, what if over a period of a few weeks more and more people started leaving their cars at home and taking public transit to work and then, on the day of the invasion, flipped the equation around and had everybody drive instead? Our infrastructure would break down. Our streets would be clogged and immobile while the few stragglers immune to the aliens' mind control would travel in empty subway cars, looking confused. What if we all stopped drinking milk for a week? Or all started eating nothing but hamburgers?

Like Clifford Simak's work, it's an interesting and different take on the alien invasion theme. However, it's not going to be one that I will work on, and thus I toss the idea out on this blog for anybody to use.

Why won't I work on this tale? Well, for me, there's one problem: who is this story about?