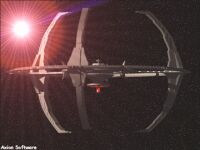 The picture on the left is a 3-D model rendered by the X-Site. Go pay him a visit.

ITEM: It is rare these days to find episodes of Deep Space Nine in syndication compared to its Next Generation and Voyager cousins. Despite this, the television show remains the most popular of the Star Trek DVD releases.

ITEM: Producers are having difficulty syndicating the critically acclaimed series 24.

ITEM: Rumours are afoot that shows such as Alias, the fourth season of 24 and The West Wing will be shown without repeat over twenty consecutive weeks.

ITEM: This year promises to offer the fewest sit-coms on television since a writers-strike afflicted season in the early 1980s.

It used to be, one-hundred was the magic number for any television show. When a program debuted that many episodes, it was possible to repeat that program five days a week for twenty-weeks. Television stations looking for content to fill their non-prime time spaces had a cheap source of supply, and production companies hardly had to lift a finger to make money. Syndication generated millions of dollars for production companies like Paramount, which built their Star Trek empire through countless repeats of the original series, then TNG, then DS9 and Voyager. Other companies have lunged on the bandwagon. These days, one only need click the remote a few times to find repeats of The Simpsons, Frasier, or Everybody Loves Raymond. A year ago, Friends was on this list.

The thing about syndicated shows, however, is that viewers don’t often tune into every episode regularly. Syndicated shows are meant to be stumbled upon. I myself tend to flip across the dial and stop whenever I see a Next Generation uniform on my screen. Then I try to play “guess the episode”, to see how quickly I can identify the season the story was from, its title, and its plot. Then I settle down to be mildly entertained for the rest of the hour. This randomness means that no program watched solely in this manner can generate a continuity. You run in for your little taste of Dr. Crane, Homer or Bart, and then you run out again.

Which makes a lot of television not about characters but caricatures. As deep a character as Archie Bunker is, its his caricature that catches people’s attention when they stumble upon an episode of All in the Family. It is for this reason that Paramount was so in love with the reset button on Star Trek: Voyager, revealing substantial changes displayed in the episode (including but not limited to the ship blowing up) to be a dream, or a temporal anomaly (like a dream) or a parallel universe (again, like a dream). It is for this reason that Paramount resisted any attempts to grow the characters. If Tom Paris changes from a reckless hotrod to a caring father-to-be over a seven year period, viewers stumbling between a first season and a seventh season episode in sequence might be confused as to who these two different characters are. Or, at least, that was the fear of the producers.

This is why the women who fell in love with Captain Kirk either died or possessed a tragic secret that kept them from reappearing in the next episode. Production companies are not interested in adding new actors to play new characters, and they’re not interested in changing the caricature of the character. Character growth is a hindrance to their syndication profits.

Well drawn characters do not behave this way. No matter how strong a book or a television show based on an idea is, it is more often than not blocked from the next level if it fails to provide a memorable character for readers to identify with. In good books, characters have journeys to make; they grow and change because of the events they experience, just like real people. They are not the same person at the end of the book that they are at the beginning.

And as television audiences got tired of the same old characters not growing week after week, television writers struggled to make their stories to be less about caricatures and more about characters. Especially in action shows, when characters are called upon to save the universe day-in and day-out, it is unreasonable to expect that they can go through a hundred exciting episodes without learning something. It is equally unrealistic to expect that characters who interact with each other every day, who have a strong chemistry, might fall in or out of love. At one level, one risks turning a show into a soap opera (see Moonlighting), but on another, one enjoys the possibility of seeing characters mature, changing into people you wouldn’t have thought possible from seeing the first episodes (see Willow and Cordelia from Buffy and Angel).

There are exceptions, of course. The Simpsons is trying to keep its syndication profits alive by embracing caricature. Homer is Homer from season one to season sixteen. It may not be realistic to expect that one could live so long and not grow, but The Simpsons turns this into a joke, at one point reminding Mr. Burns of the other dealings he has had with Mr. Simpson, but having Mr. Burns explicitly fail to recall those events, and deal Homer into one of his evil schemes as though for the first time. Even in The Simpsons, however, there has been growth. Ned Flanders lost his wife Maude. Alcoholic Barney Gumble kicked the habit and now drinks copious amounts of coffee.

All stories have a plot, the central reason for their existence. Behind the plot, some stories have a variety of subplots; little arcs that minor characters have as they change and grow along with the hero. In serial stories, however, where characters return again and again, there is a great temptation for the writers to build a superplot — a plotline that develops over several episodes or several books, separate from the main plots of the individual stories. The authors behind the Audio Visuals fan producers of the Doctor Who audio plays found the lure of superplots to be irresistable, culminating in their epic fourth season whose Justyce storyline dominated the stories beneath it. Buffy and Angel play the superplot every year, building up a big bad for the season, and bringing the story to a shattering climax in time for the May sweeps. Even Frasier built on Niles character, developing his crush on Daphne into a love that was reciprocated, into marriage and a child. All of these elements demand an audience’s attention week to week. If they miss an episode, they’re expected to catch up, somehow. This is possibly the first time in years that network television has demanded some intellectual investment from its audience.

In the mid 1990s, shows which embraced this trend included Babylon 5, which was established from the pilot with a five-year storyline guiding its individual episodes. The X-Files tried to copy Babylon 5’s success, and stumbled when it dragged out its superplot far beyond any reasonable point where it should have ended. It is 24, however, that has taken the superplot to the extreme. Its single season-spanning storyline entwines around twenty-four separate episodes, rendering the individual stories within to the status of subplots.

It is demanding viewing, but it is also fun viewing. No only do we watch characters instead of caricatures, it’s neat to see how the show’s producers can handle the unpredictable nature of writing an entire season when episodes begin to air well before the final episodes have been written. It is not viewing that’s conducive to syndication. Or even repeats.

Along comes the DVD box set, releasing television shows season by season, giving the viewer full control over how he or she watches a television program. He or she no longer has to count on the randomness of syndication and he or she is no longer punished for missing individual episodes. Now they are able to see the superplot develop, episode to episode. Television production companies are making millions from sales of these box sets, and a dichotomy is appearing in the marketplace. In many cases, series that don’t fare well in syndication do very well on DVD.

And the DVD generation is probably also responsible for the rumoured release of the next season of Alias over twenty consecutive weeks, and why Doctor Who and Battlestar Galactica will probably take the Babylon 5 route of individual episode plotlines having equal importance to trans-episodic superplotlines. The success of 24 means that more producers will sit down and see how the storyline of the season can be plotted out. For television audiences, it means their intelligence is insulted less often. For television characters, it means a chance to live, grow and be more real.

And as a writer, I think that’s a good thing.