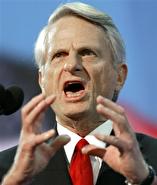 Andrew Sullivan used to be a staunch supporter of the Republican Party. Certainly, his mere presence as a cosmopolitan, homosexual libertarian, fierce in his defence of the Bush Administration’s foreign policies was enough to get under leftist Tom Tomorrow’s skin with incredible regularity (warning: link includes swearing), something which endeared him to no end to his Republican counterparts.

Then the Bush Administration threw its support behind a constitutional amendment to ban gay marriage. And now the Republicans at their national convention have reaffirmed their support for said amendment, despite a bruising defeat in the Senate. Mr. Sullivan quickly came to the conclusion that at least some members of the Republican party do not see him as a worthwhile human being, let along a worthwhile Republican. His changeover, from defender of the Bush Administration to harsh critic, was swift and brutal.

Zell Miller’s address will, I think, go down as a critical moment in this campaign, and maybe in the history of the Republican party. I kept thinking of the contrast with the Democrats’ keynote speaker, Barack Obama, a post-racial, smiling, expansive young American, speaking about national unity and uplift. Then you see Zell Miller, his face rigid with anger, his eyes blazing with years of frustration as his Dixiecrat vision became slowly eclipsed among the Democrats. Remember who this man is: once a proud supporter of racial segregation, a man who lambasted LBJ for selling his soul to the negroes. His speech tonight was in this vein, a classic Dixiecrat speech, jammed with bald lies, straw men, and hateful rhetoric. As an immigrant to this country and as someone who has been to many Southern states and enjoyed astonishing hospitality and warmth and sophistication, I long dismissed some of the Northern stereotypes about the South. But Miller did his best to revive them. The man’s speech was not merely crude; it added whole universes to the word crude.

What’s remarkable about the Republicans is their utter indifference to fairness in their own attacks. Smearing opponents as traitors to their country, as unfit to be commander-in-chief, as agents of foreign powers (France) is now fair game. Appealing to the crudest form of patriotism and the easiest smears is wrong when it is performed by the lying Michael Moore and it is wrong when it is spat out by Zell Miller. Last night was therefore a revealing night for me. I watched a Democrat at a GOP Convention convince me that I could never be a Republican. If they wheel out lying, angry old men like this as their keynote, I’ll take Obama. Any day.

Nothwithstanding your blindered view, it is interest to compare the general themes of the two conventions. There is a party of fear, but not the one you think.

This will probably be the election cycle after which the Democrats discard their fringe elements, move back toward the political centre, and redefine what they are for.

When challenged on this assertion, he leaves the argument with this parting shot:

Sigh. Forget it. It’s not my job to steer you away from interpretations which serve your daily fix of self-righteous indignation. Eventually mainstream Democrats will learn to see through eyes other than those of the party faithful, to be objective about why events turned out the way they did, and to map out an appealing vision of the future. Only then the Democrats will be able to recapture some of the “uncommitted” middle.

I think Andrew Sullivan at least represented the right-hand side of the “uncommitted” middle, and the commentator might want to remove his own blinders to see how unappealing the Bush Administration remains to many centrists.

My good friend Marguerite e-mailed us, demanding that we tune in on Jon Stewart’s The Daily Show, which took Zell Miller apart. Not that Mr. Stewart had to do all that much; at one point, he stood back and simply let Zell Miller’s quotes play. The results had Erin and I in complete stitches. Not a good showing for the Republicans, all told. As the Democrats and the Canadian Alliance know full well, ridicule is the deadliest weapon in politics.

I’ve said it before and I’ll say it again: the only difference between Republicans and Democrats now is that the Bush Republicans believe in Big Insolvent Government and the Kerry Democrats believe in Big Solvent Government. By any measure, that makes Kerry - especially as he has endorsed the critical pay-as-you-go rule on domestic spending - easily the choice for fiscal conservatives.