Take a good long look at Hurricane Ivan. Look at where it’s going. And consider that it is now a category five.

I also pity poor Jamaica, which looks like it’s going to bear the brunt of this storm. I hope they’re better prepared after being lashed with Gilbert back in 1988. But then, how exactly do you prepare for 160 mph winds?

Now might be a good time to contact aid agencies such as the Red Cross and ask about things you can donate. Why wait until the last minute.

With almost nothing but open sea between Jamaica and Hurricane Ivan, officials expected the Catagory 5 storm to be worse than Gilbert, which hit Jamaica in 1988, killing 45 people. Jamaican Prime Minister P.J. Patterson told his fellow Jamaicans that Ivan poses an “imminent danger” and that they should prepare for “the worst-case scenario.”

“In case of Rapture, this car will be empty.”

“In case of Rapture, can I have your car?”

The driver of car #1 is being just a tad bit presumptuous, I think. I myself suspect that if the Rapture does come to pass, those who have spent their lives anticipating it may find themselves sorely disappointed. 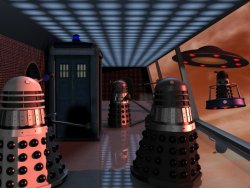 Doctor Who Returns to CBC After 40 Year Absense

In 1964, Canada’s national broadcaster acquired the rights to air episodes of the BBC’s new family program Doctor Who. The national network aired the program’s first season, from An Unearthly Child through to Marco Polo, a total of 20 episodes, after which they did not renew their contract (although faint rumours persist that local affiliates may have continued to purchase episodes from the BBC).

As Doctor Who became the longest running science-fiction program on television, it built up a following in Canada thanks to the efforts of TVOntario, a few other local networks, and bordertown US PBS stations. Except for brief attempts by YTV (Canada’s Youth network) and Space (Canada’s science fiction network), Doctor Who has not been marketed as a national product. Until now.

Meanwhile, the press document also contains at least one overseas broadcast note: it confirms the involvement of Canadian broadcaster CBC, who is says has purchased the series ahead of delivery and will be transmitting it as soon after the UK transmission as they can. We’ll keep you posted when any other press documents come out of BBC Worldwide.

This news is really fresh; the CBC itself has not yet announced Doctor Who as part of their spring or summer 2005 lineup, but it does corroberate earlier reports that CBC and Space were in something of a bidding war to acquire rights to the new series. It also fits well with the CBC’s embrace of British television, showing Coronation Street in prime time and steadily broadcasting the latest in British comedy and drama.

This is the second time the public broadcaster has also outbid Space for a major television production. While critical reaction to the miniseries Taken was mixed, the fact remains that Space very much wanted it on its network, but was defeated by the surprisingly aggressive CBC.

One hopes that this means that Doctor Who will get a serious marketing push by the CBC, giving it an airing it has not had in Canada in over forty years.

No official word yet if the Doctor’s greatest nemesis will be “updated” for the new series, but that hasn’t stopped the magazine SFX from asking readers to submit their designs to a contest. Some of the entries (no word on whether they won or not) are here, and despite my reservations with tampering with the Dalek design, I’d still have to say that some of them look darn good.

Erin’s inaugural reading for National Literacy Day at the Waterloo Public Library main branch went well. We had a good turnout, and everybody was happy to be there. Erin read from her new book (still in progress), Seal up the Thunder and, in honour of the day, from a selection of her word and language poems.

I myself have been busy on a number of fronts; none of them related to the :Trenchcoat Farewell Project:, unfortunately. But I hope that will change this weekend. Sealwife is going well, having gone through its first workshop. Erin, again, has been absolutely invaluable.

No temp assignments or interviews, yet, but I still have my hopes up. Keep your fingers crossed.