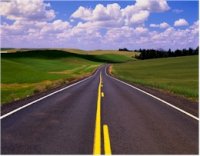 As a Torontonian, I am privy to the same world record: Toronto’s main street, Yonge Street, the longest street in the world. Look it up; it’s in the Guinness Book of World Records: 1,896 km (1,178 miles) from the shores of Lake Ontario to the border with Minnesota. This little fact has been at the centre of more than a few tourist pitches to Toronto’s slightly seedy (but improving) Yonge Street strip.

Just one problem: the record is a bald-faced lie.

The record measures the length of Ontario King’s Highway 11, which was another name for Yonge Street as it left the shores of Lake Ontario and headed north. However Yonge Street, the original street laid down in the 1790s and named after John Graves Simcoe’s friend, Sir George Yonge (the British secretary of war at the time) breaks away from Highway 11 at Bradford and makes a bee-line for Holland Marsh. Holland Marsh was the northern extent of settlement in the 1790s. Highway 11, which stretches up to North Bay and then winds its way over the Canadian Shield of Northern Ontario, was built much later. Although it also keeps the name of Yonge Street initially, as this highway proceeds through Barrie, Orillia, North Bay and Thunder Bay, it is not once referred to as Yonge Street. It’s not even consistently referred to as the same street between those cities, or within those cities. To add insult to injury, Mike Harris and his Tories severed the link between Kings Highway 11 and Yonge Street, downloading the provincial highway onto the regional municipality of York and the City of Toronto as a budget cut.

Transit activist though I am, the fact that the current title-holder of the longest street in the world ought to be disqualified for cheating leaves a bit of a hole in me. Somewhere out there, the real longest street exists. But where does it come from? And where does it go? Sometimes, when I have access to a car (rented or a friend’s), I get in the mood to go on a quest.

Here are a few ground rules for that quest.

Already some interesting candidates present themselves. Yonge Street (true Yonge Street, which follows in the same straight line, and not the part that breaks off and heads to Barrie) is an interesting trip from Lake Ontario to Holland Marsh, but Bathurst Street, two kilometres west, is longer, running slightly further north and south than Yonge at either end.

Then consider Airport Road. This arterial road that runs beside Toronto’s International Airport starts as Dixon Road at Scarlett Road near the old village of Weston in northwest Toronto. Running west, it changes seamlessly into Airport Road at the boundary to Mississauga, and then curves northwest, and keeps on going. Passing over the Oak Ridges Moraine and near the Niagara Escarpment, it keeps its name straight up to the rural community of Stayner. It used to continue on as King Street, stopping just shy of Georgian Bay in the community of Bower’s Beach, but intersection changes mean that King Street it seamlessly aligns with Lakeshore Road and it continues northwest as Ontario King’s Highway 26, finally coming to an end at Hurontario Street in Downtown Collingwood.

And does Airport Road actually start at Dixon and Scarlett, or are Dixon and Scarlett as one? They meet at an L-shaped corner, but not at a proper intersection. One road simply takes a sharp turn into the other. The road that Scarlett Road used to take past Dixon Road, now named Riverview Heights, has been realigned so that it meets Dixon Road at a T-intersection. Does Airport Road truly begin at the T-intersection of Scarlett Road and Dundas, a few kilometres to the south?

I like thinking of roads this way because they become secret pathways linking communities in surreptitious ways. It’s doubtful that the people in the apartment buildings at the foot of Scarlett Road know that they have Collingwood at the other end of a very long driveway, or that those at Kingston Road and Dundas can take a winding road out to a T-intersection in southwestern Ontario somewhere near Paris. It may surprise these people to know that Dundas Street doesn’t actually go to Dundas, Ontario, although years ago it did.

Driving, or even walking, these streets, it would be interesting to see how they change in character, from farm field, to woodlot, to suburb, to centre, and back again. It would be like crossing America on the Interstates, or using the Trans Canada highway, but in miniature.

It would be capturing the true life-cycle of a single, long-lived street. I want to be there at the beginning, and I want to see it through to the very end.

Steeles Avenue is another street that interests me. It runs uninterrupted from Appleby Line west of Milton, in the heart of Escarpment country, all the way across the top of Toronto. Until a decade ago, it used to end at the boundary between Toronto and Pickering, the very north-east corner of the city, but now Durham Region has linked up Taunton Road with this intersection, making it a single street from Milton to Oshawa.

Steeles Avenue is made even more interesting as it takes a two kilometre break, due to the Escarpment, before resuming for a brief stretch west at the Halton-Hamilton border. Normally, we’d consider this a break, and the two segments two separate streets, but both share the name Steeles Avenue, and both line up. If it weren’t for the Escarpment, the road would be running through. That makes it an exception.

Here’s an issue that should unite liberals with conservatives (the libertarian-minded ones, at least). The time has come to defend your right to copy your television, radio and digital signals for your own personal use.

The good folks at Save Betamax are organizing a national call-in-to-Congress day to try and stop legislation that would allow multi-millionaire media companies seek to restrict the free flow of information to their own limited channels. Despite the economic boon derived from the development and sale of video cassettes and DVDs, these hugely profitable corporations have never forgiven the U.S. Supreme Court for ruling that individuals had the right to record content in their home for their personal use. It is this ruling that makes the recording of television episodes on VCRs and DVD-Recorders legal, not too mention mix-tapes and mix-CDs.

By introducing legislation that would essentially ban a person’s ability to record a DVD as he or she saw fit, the content producers are seeking to curtail our democratic freedoms, forcing us to swallow their content the way they offer it, not by the way we want it. One wonders what they’ll set their sights on next if they pass this legislation. The ability of libraries to lend out CDs, DVDs or even store old newspapers on file?

Whether or not you believe it is wrong for massively profitable corporations to seek to curtain consumer choice simply to make even greater profits, or if you believe that any attempt to restrict the free distribution of information is an affront to democratic freedoms, or both, this is a cause you should support. Unfortunately, those outside the United States are unlikely to have much of an impact in this campaign, but perhaps you could spread the word far and wide so that more Americans do their civic duty for democracy.

Thank you to Geek News Central for bringing this to my attention.