Surprise! It Changed Nothing. 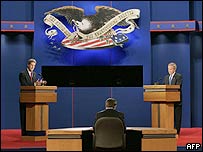 Did not watch the debate yesterday. Didn’t figure I needed to. For one thing, I don’t vote in U.S. elections, not being an American citizen. For another, all I had to do was take a few samples from the blogosphere to see whether or not much had changed.

So, from The People’s Republic of Seabrook

Bush hammered (with) half-truths and half-baked accusations. Kerry attacked Bush with specific, focused arguments, and he did so with surprising grace, passion, and abbreviated eloquence. An hour into the debate, Bush looked like a scared, petulant child who’d been caught in one too many lies. In fact, that is exactly what happened. No matter how many times Bush tried to tie Saddam Hussein to 9.11, Kerry beat him down like a rented mule. There is something to be said for speaking the truth firmly and concisely.

From The Eleven Day Empire

The President looked uncomfortable at times, and stammered, as he often does in public, being an awful public speaker, but that was all expected, and in spite of that, he made his points clearly.

And the difference between the candidates was made crystal clear, in case it wasn’t before: John Kerry has no vision of America’s place in the world, or any real understanding of the war on terror and the threats America faces. The President does.

Kerry referred over and over to Al Qaeda and Osama bin Laden. He displayed no recognition whatsoever that the war on terror is not just a campaign against Al Qaeda. Mr. Kerry gives the impression that once we catch Osama, that’s it, the war is over and America is safe. He believe - or at least, his words give the impression that he believes - that Osama is a Blofeld-esque figure, and once we find and destroy his secret lair, the danger is past.

He was confident, forthright, articulate, with moments of humility. He spoke with a wonderful gravitas that reminded me more than once of his stirring convention speech. By contrast, George W. Bush looked annoyed, flustered, whiney and shrill. He tried for the good-ol’-boy, relaxed style he is known for…but it didn’t translate well on screen. He looked like a jerky, wind-up Ken doll.

George W. Bush seemed to be on the defensive the entire time. His entire debate seemed to consist of phrases that began with sentences such as “Of course I did…” or “Of course I know…”. Every time he tried to attack Kerry, he came off sounding like a petulant child, ticked off that his opponent was pointing out mistakes and omissions he would have preferred to ignore.

From Kinshasa on the Potomac

Well, Bush and Kerry will face off tonight, although they won’t be able to actually address each other (I’m surprised they’re in the same room).

It is so pathetic to see one man who leads the most powerful nation in the history of man and a second who wants the job, afraid to actual(ly) have a 90 minute long debate. Just the two of them, talking to each other, challenging each other, pointing out the weaknesses in each other’s policies and positions.

So, there you have it: on a fairly random sample of my blogroll (which is not, strictly speaking, a very random sample), everybody who watched the debates did so through the filter of their own biases and preconceptions, and their favoured candidates lived up to their expectations. Jeff Durkin (Kinshasa) had roughly the same reaction that I had, feeling so strongly that the debate itself had been thoroughly sanitized, that he didn’t watch.

I think the most objective response that I’ve heard, so far, came from Erin (who is a registered Democrat), who said that the debates were surprisingly effective, with both Kerry and Bush speaking to the points and getting pretty deep into the issues (this was probably the result of Jim Lehrer acting as moderator and composing all of the questions himself). She thought that Kerry did well, and that Bush didn’t do badly.

So, bottom line, the election remains as close as it was in 2000.

Observers first suspected a change in Bush’s emotional state when, following a blistering attack from Kerry, a large, apparently wet stain began to appear on the front of the President’s pants.