Preparing for Coupling Who 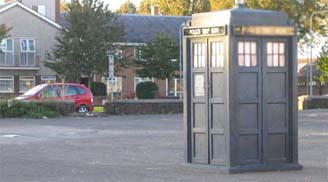 So, there have been developments in the Doctor Who universe.

Episode one, entitled Rose, will air on Saturday, March 26 on BBC1. It will be followed on Tuesday, April 5 at 8 pm EST on the CBC. The CBC, apparently, is now listed as a co-producer, which could explain why they got to show trailers before even the BBC, and why they’re now trumpeting an exclusive North American release. Although deals have been worked out for Australia and New Zealand, it may be months before they get to see the new episodes; we’re going to be just ten days behind.

Disturbingly, The United States still does not have a distributor. Sci-Fi Channel looked at the rushes for a few episodes and turned it down, citing quality concerns. This from a station whose original content includes a TV movie entitled Mansquito, about a half-man, half mosquito. But it illustrates what we have to expect about the new Who.

As some of you know, a copy of Rose was leaked onto the Internet, and of course fandom went on a downloading feeding frenzy (as did a few non-fans). Reviews of the first episode have generally been 70% positive, with some minor kitsch concerns. This review, by somebody who never really watched the original show, is heartening, but it’s clear that the new series of Doctor Who may not be what some people expect.

The new Doctor Who is not going to follow in the footsteps of the developing American sci-fi renaissance. If you’re looking for Doctor Who to be like the fantastic Battlestar Galactica, you are going to be disappointed. Instead, the new series appears to be a close cousin of British comedy. Reviews of Rose cited a deliberately low-budget, almost kitchy feel. The episode was shot on video and put through a filter effect to make it look as though it was shot on film, a technique used primarily by sitcoms, including the hit British series Coupling. And the clincher: there is a scene where the companion Rose (played by Billie Piper), meets up with her boyfriend at a restaurant. The boyfriend then gets replaced by an Auton, a plastic replica with shiny skin and a plastered-on smile that says nothing, and self-absorbed Rose is too busy talking about herself to notice.

This is Coupling Who, folks. Look at the writing staff for this show: Russell T. Davies has a long list of credits to his name, including Queer as Folk and the looney Mine, All Mine. Even Stephen Moffat of Coupling is aboard, having been commissioned to write two episodes. This is not pseudo-documentary style action-adventure. This is very British, and for this reason it does not fit comfortably on Sci-Fi America’s schedule.

I should also point out that we should not judge the new series on the basis of the pilot episode alone. Doctor Who has the most flexible format in television, and it has been known to turn on a dime. Russell T. Davies also wrote a two-part mini-series entitled The Second Coming (starring Christopher Eccleston) about you know what. Simon Pegg of Shaun of the Dead is aboard, as is director Joe Ahearne, previously responsible for the violent cult classic Ultraviolet.

The original Doctor Who lasted twenty-six seasons because of its flexibility and because of its refusal to stay pigeon-holed. So far, Russell T. Davies does not seem interested in aping the successes of Battlestar Galactica or Stargate SG1, and while that may have made his show unsuitable for Sci-Fi Channel, it’s still the best move he can make to make Doctor Who distinct among today’s offering of genre television.

After all, why copy Battlestar Galactica when the real thing is already doing gangbusters on TV?