The Conservative Critique I - Urban Affairs

Previous Article: How to Keep the Scary Suit off of Stephen Harper. 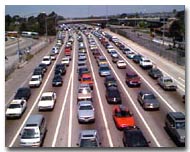 There is no issue that will affect Canada’s future more profoundly than urban affairs; not same sex marriage, not Quebec or Alberta separatism, not even the underfunding of our military. Already, the majority of our population reside in urban centres, and this percentage is only going to increase. Already our economy is heavily reliant on information-based industries, and over time, our reliance on basic manufacturing and agriculture will diminish. This is already happening, but it’s a reality not effectively addressed at the federal level.

Paul Martin may have slayed the federal deficit, but there exists in this country an infrastructure deficit estimated at $2 billion per year. This represents a shortage of money required to keep our roads, sewers, water works, bridges, tunnels and public transportation systems in a state of good repair, and this only describes the bare minimum required to keep our infrastructure intact; it doesn’t describe the infrastructure required to handle the growth that will come. As an example, consider that the Toronto Transit Commission is short $100 million per year on capital spending required to keep the trains and buses running on time. Studies suggest that the TTC will need $375 million per year on top of what it requires for a state of good repair in order to ensure that Toronto doesn’t choke on its own congestion.

This is not just a Toronto issue. Vancouver, Calgary, Edmonton, Winnipeg, Montreal and Halifax all struggle with aging infrastructure, congestion, pollution and inadequate resources with which to handle these issues. Congestion in southern Ontario alone costs the economy $2 billion per year in increased fuel costs, vehicle maintenance and delivery delays, and this does not include health problems from smog. This is as strong an impediment to investment as a high corporate tax rate — stronger, even, because at least with a high corporate tax rate you can count on getting some of that money back through services. The congestion tax is simply spat out through the tailpipe.

Our urban centres have seen a boom in investment over the past decade, largely from the information sector. The companies coming from around the world are incredibly mobile, and have located themeselves here in spite of competition from such centres as New York, Chicago and Minneapolis. They are attracted to Canadian cities because of the presence of a highly educated workforce and the reputation of American cities built by such places as downtown Detroit. This advantage is not going to last; the federal government of the United States has invested billions in American inner cities, and is turning those downtowns around.

Despite the social and economic pressures that result, the increased congestion and pollution, the current system in Canada encourages urban sprawl. Despite providing the bulk of the services Canadians access every day, our cities have limited taxation powers — basically only property taxes and development charges. A number of the services cities’ provide are mandated by provincial legislation and cities are prevented, by law, from running a deficit. Thus those cities with lots of available land can reap a windfall by developing new subdivisions as quickly as possible and gouging new homeowners through the purchase price of their home.

That pays for the installation of new infrastructure, but not for its eventual replacement. Those cities whose available land has run out tend to get crushed under the burden of increasing property taxes. Torontonians know this. The residents of Mississauga are coming to know this as well. Infrastructure deteriorates even as taxes increase, and centre cities run the risk of slipping down a spiral of urban decay.

Canadian cities are where the bulk of this nation’s prosperity resides. They face challenges they are not equipped to handle, and they are in direct competition with American centres receiving billions in federal funds. Many have suggested that it’s past time that the Canadian government take an interest in urban affairs. If the constitution can’t be rewritten to recognize the unique needs of our cities, then some suggest that our feds have to address the infrastructure deficit through cash transfers.

The Liberal Party has paid lip service to a New Deal for Cities. For years, they acknowledged the needs of Canada’s municipalities, but they did nothing. Finally, in a minority situation and prodded by the NDP, the Liberals have taken action — just in time to be threatened with defeat. The mayors of all of Canada’s major cities were looking forward to receiving some long promised cash to fix and expand their infrastructure. With the Liberals on the ropes, attention has turned to the Conservatives.

And here’s the big problem with the Conservative policy on municipal affairs: they don’t have one.

To turn this weakness into a strength, the Conservatives need to address the issue, acknowledge the need, and then critique the federal Liberals’ response to that need. They don’t need to say “me too!” to every Liberal handout. It would be consistent to core Conservative values to argue that, according to the British North America Act and the 1982 Constitution Act, the federal government has no place addressing the needs of municipalities. Further, it may be fair to point out that Liberal interference served to cause many of the problems faced by municipalities in the first place.

This is where you get to talk about the fiscal imbalance. This is where you note that, to balance the books in 1994, finance minister Paul Martin clawed back transfers to the provinces. The federal commitment to the provinces’ health care budget dropped from nearly half to nearly ten percent. This may have prevented national bankruptcy, but it moved the problem onto the provinces, which either took the political heat for cutting services, or took the heat for raising taxes. More often than not, they simply passed the cuts one step down the line. Municipalities are creatures of the province; they provide whatever services the provinces tell them to provide.

Ultimately it was property taxes, not the GST or income taxes, that got Canada out of deficit. It is for this reason that Edmonton, Calgary, Vancouver and Toronto taxpayers are paying significantly more more in property taxes now than when the Liberals took power. Paul Martin, Gordon Campbell, Ralph Klein and Mike Harris got the glory of lowering taxes and slaying the deficit. They did so by passing the costs onto the municipalities, and leaving the municipalities to take the heat.

The Conservatives should argue that, while the needs of our cities are great, the responsibility for fixing the cities’ problems rest with the provinces. To help the provinces along, the feds should get out of jurisdictions which are solely provincial purview — like municipal affairs. Furthermore, to encourage the provinces to get moving, the feds should transfer tax points, and a few cents of the gas tax to the provinces, so they can have the resources to channel to their cities. This was the Conservative platform in the 2004 election (transfer 3 cents of the gas tax to the provinces), but it wasn’t communicated as an urban affairs issue. Until the Conservatives improve their communication on this issue, the Liberal club remains.

Ideally, our cities should be granted the power to tax themselves using means other than property taxes or development charges, but reopening the constitution to recognize our cities’ needs is unlikely. Anyway, the provinces have the ability to set municipal tax powers, so the Conservatives can argue that it’s time to knock the ball back in the provinces’ court.

There is a risk to this admission: by acknowledging the infrastructure deficit and the needs of our cities, it could throw a wrench into the Conservative contention that Canadians are overtaxed. The good news is, the Conservatives can acknowledge the problem while following a policy that is consistent with their provincialist viewpoint. The main problem with the Conservative standpoint at this point is their unwillingness to communicate it.