The Beauty of America is in its Food 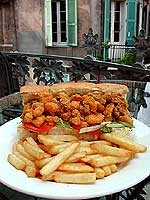 Despite all of my criticism of the Bush Administration and my fears over where the fundimentalist evangelical Christians are pulling the nation, America is and remains a beautiful country.

Yes, I realize I’m saying this on Canada Day, but there’s no sacrilege in saying nice things about your neighbour. Before 1995, I’d left southern Ontario a sum total of two times — once to go to Hull (ending up getting stuck in Place du Portage, which doesn’t count) and the other to Montreal). It was only in November 1995, when I was twenty-three years old, that I left Canada for the first time to go to Chicago, to meet the woman who would become my wife (full story here).

Since then, I have travelled farther afield (though not nearly far enough). I’ve been to New Brunswick, Nova Scotia and PEI. I’ve visited Michigan, Boston Massachusetts, Chicago Illinois, Fort Lauderdale Florida, Iowa, Minnesota and Nebraska. I’ve passed through Indiana and Wisconsin. And the furthest west I’ve gone was to within seventeen miles of the Wyoming border in the Black Hills of South Dakota. I’ve climbed the Little Devils Tower and I’ve seen the Crazy Horse Memorial, and I can see that America is a beautiful country. I have listened to Americans, and I can hear that they are beautiful people.

One of the places where you see America’s beauty is in its food.

I shouldn’t blog on an empty stomach, but full stomach or not, whenever I watch the documentaries of George Motz, I get in the mood for a sandwich. George Motz has travelled America and has done the unthinkable: he has convinced me that hot dogs and hamburgers are beautiful cuisine. He’s also done a remarkable documentary on Sandwiches You Would Like that has me salivating, but its the hot dog and hamburger specials that you’d think would be a harder sell.

And, of course, we’re not talking about your chain restaurant. McDonalds’ Big Macs and Wendy’s burgers offer parodies of the real thing. Motz lovingly chronicles the regional diversities of the land, showing us the back road places where you can get a truly remarkable sandwich. And watching these specials, this Canadian is able to come to appreciate the beauty of American cuisine — which, incidentally, globalization is threatening along with the regional diversity of Canada and Europe.

Of course it’s not just the sandwiches that makes these documentaries interesting. We can get pictures on a travel brochure. Rather it’s the people that Motz talks to who sit down together and share a meal. He finds a diverse community in these joints; African and European-Americans sitting together, immigrants from Vietnam and from Mexico. They’ve all contributed their culture to the great mix, and though they may be losing their language in the melting pot, their food is a part of the stew. For a moment, at least, the barriers are down and people from a wide variety of backgrounds are sharing meals.

America is a lot more diverse than we think. The regional differences between the Philly cheesesteak and the St. Louis St. Paul sandwhich reflect not only the space between the cities, but the different people who settled there (Germans and Chinese in these two cases). Even the hamburger and the hot dog reflects the influence of German culture in American society, and it’s simply wonderful that the falafel is becoming popular in Boston and New York.

Canada has the same regional differences, the same cultures contributing their beauty into the mix. This country has the same gems going undiscovered by the wider population, but it’s important to recognize that has that same diversity exists beneath the surface of America, and that it too deserves celebration. Our struggle to maintain our local identities within the corporatization and the consolidation of this world is shared by average Americans, and we can use all the allies we can get. But most importantly, we need to make time to open our mind. I wish I could. I wish I could visit New Orleans and have myself a Po’Boy sandwich. I want a real Philly cheesesteak (not the crappy copy from East Side Marios). Unfortunately, I just don’t have the time to travel to the neighbourhood gems in either Canada or the United States.

It’s the lack of time, I think, more than anything else that is causing these regional colours to fade into a corporate beige. We just don’t have the time to search for the hidden gems anymore. We have kids to look after, chores to do, jobs to slave away at. Rather than take the time to search for and celebrate the best around us, we gravitate towards the familiar: the golden arches that have sprung up both at home and a thousand miles away. Or the Blue Screen of Walmart. It’s not the best we can do, but we can do it and be done quick.

We’d think differently if we took the time to get to know these people, but as I’ve said: there is no time.

Our life is going too fast. Stop and smell the roses? Try seeing the roses when you’re at highway speeds. But the roses are still there, in desperate need of watering. You just have to have enough faith to leave the Interstate at the next offramp, stop the car, get out and walk.

And, while you’re at it, have a sandwich.