'Scuse me, while I break the sky! 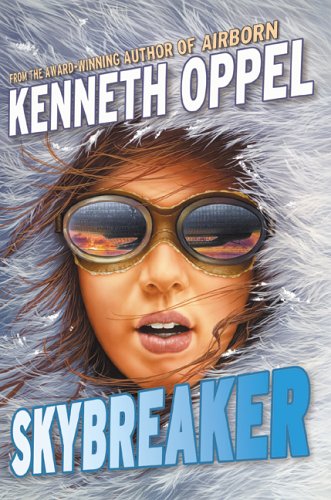 I ordered two hardcovers this month and had to wait for their release before I received them. One was Harry Potter and the Half Blood Prince by J.K. Rowling. The other was Skybreaker, by Kenneth Oppel. I’m going to be reading the latter, first.

It must take a lot of guts, or plain stupidity, to release a young adult novel one day before Rowling’s latest juggernaut. Perhaps Harper Collins was hoping to catch the Harry Potter wave. Perhaps they were supremely confident that Skybreaker could take on the competition… Yeah, I’m leaning towards “guts”.

Skybreaker is the sequel to Airborn, a swashbuckling fantasy novel set in a parallel-Edwardian Earth of giant airships travelling across the world. Matt Cruse is a cabin boy on the airship Aurora, a luxury liner of the Lunardi lines. The novel starts when he spots a derelict balloon about to fall into the Pacificus. Rescuing the passenger, a grizzled old man, they’re unable to save him and he dies babbling about beautiful creatures in the sky. One year later, a pretty young woman boards the Aurora with her chapperone, and seeks out Matt. The old man was her grandfather, and she’s determined to follow up on his disbelieved discovery of strange winged creatures flying on the air currents.

Kenneth Oppel manages to capture the right mix between historical romance and a surreal new world. You have the class distinctions and the budding love affair across the great divides that you’d expect from Titanic (only far less smarmy), and you have the action of storms, pirates, and overbearing chapperones who don’t trust wayward cabin boys. You have fantastical cloud cats soaring the air currents. You have fights atop the skin of an airship, crashes, near-misses, and action, action, action. It’s a great ride well told, and it’s no wonder Kenneth Oppel won the Governor General’s award for best children’s literature — not to mention a whole host of other awards across North America.

For Skybreaker, Kenneth Oppel brings back Matt Cruse and Kate DeVries, and moves the action to 20,000 feet above the Arctic Ocean, where the legendary ghost ship, the Hyperion, has been found. Good thing Kenneth didn’t call it “the Endurance”, as that would have hit things a little too on the nose, but the book promises all of the action of Airborn plus an Arctic expedition, and my early glances through the book suggests another hit.

The film rights to Airborn have been optioned off to Albert Ruddy (The Godfather) and Andre Morgan, who have teamed up with director Stephen Sommers (The Mummy) to look into producing a movie. It’s possible — likely even — that nothing will come of this, but if a Hollywood movie gets made of a Canadian novel that’s rapidly growing in popularity, watch out.