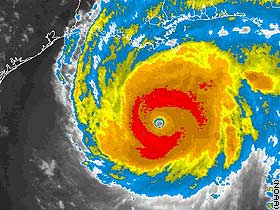 Crossposted to the People’s Republic of Seabrook.

Rita should make landfall within the next thirty-six hours, and my thoughts are with Texas.

Twice this year hurricanes have me thinking of my friends in harms way. In this case, Jack Cluth of the People’s Republic of Seabrook, whose blog I’m guest blogging on while he takes a very well-timed trip to Williamsburg, Virginia, is not happy. Seabrook is on the outskirts of Houston and is also about a half-a-mile in from the coast. His wife has high-tailed it out of there and is joining him, so the important person in Jack’s life is safe, but he’s understandably worried about the state of his home. One of the other guest bloggers also hails from the Texas coast, is heading out. His cat cams are about to become cat-5 cams, he jokes.

What I find particularly disturbing is the prediction that Hurricane Rita will stall once it hits landfall. The storm surge is one thing, the winds are another, but if a hurricane stalls and dumps all of its rain over a particular area, that’s a new level of catastrophe. Imagine Dallas/Fort Worth facing 15-30 inches of rain.

I’ve heard back from a friend of mine, Pat Degan, who evacuated New Orleans and is now holed up in Alabama. He and his family are okay, but it looks like his house was under eight feet of water during the height of Katrina’s aftermath. And while one can recover from that, there are still small things he’s lost that’s irreplaceable. Like his entire Doctor Who collection, including the fanzines he helped illustrate. He wants to replace what was lost, though he knows that’s probably an impossible task.

I’m pleased to tell him that I can help him on the Trenchcoat front at least. After all was said and done on the :Trenchcoat Farewell Project:, I had three unclaimed copies left over, and I resolved that these should go to the primary artists for the magazine: Martin Proctor, Pat Degan and Alan Ivins. Martin I was able to deliver by hand, but the other two had to wait until I had spare funds to mail these mammoth hardbound books. Well, that wait appears to have been slightly fortuitous. Pat will get some of his work back, at least.