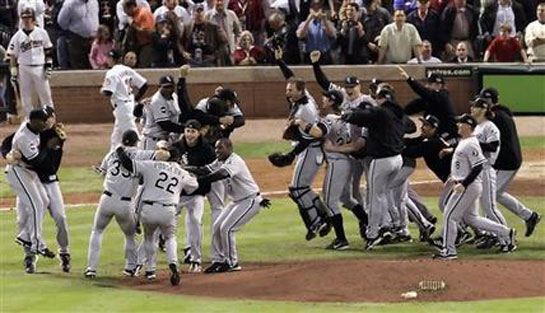 This is just the taste of things to come. First the Red Sox and now the White Sox. That means, next year the Cubs get to lift the curse. You just gotta believe!

Actually, I’ve always said that 2008 was the Cub’s year of destiny. They were going to go all the way, and their opponents in the series would the the White Sox.

Well, maybe losing to the Cubs in such a series won’t be such a bitter pill for the White Sox, now.

And though Jack Cluth is probably feeling down, Houston fans should take heart. Though they were swept, the last two games were only won after the last out. It was a close and exciting series. Special note as well go to the classy Houston fans who didn’t interfere when the Cubs outfielder caught a foul fly in the stands.

Actually, you want to see something really strange? Erin’s best friend from high school, Therese, is here to attend the birth. She’s a registered nurse, and thus somebody who might be useful to have in the delivery room should I buckle (not that I’m likely to). But anyway, consider the following: